They who search after the Philosopher’s Stone are by their own rules obliged to a strict and spiritual life. ― Isaac Newton

Part of an ongoing series. For context, see Entry #1 here.

There was a time in America where Roger Babson was widely considered to be one of the country’s greatest investors. After the Wall Street Crash of 1929, his portfolio stood intact while nearly all others around crumbled. Whoever had any capital remaining fled to him, and the money under his management grew tremendously. He was the man who had predicted the inevitability of the crash, and he became vastly wealthy as a result. He formulated his own theory about financial markets and how they functioned, and the payoff was massive.

That theory? Roger Babson believed that the financial world, like most other aspects of our lives, was subject to Isaac Newton’s laws of motion. For every action, there is an equal and opposite reaction. The stock market was up, therefore it had to come down, constrained by the same forces as the physical world. This theory made him a very rich man.

He went on to have a long and prosperous life, dedicating his time, energy and money to fighting what he believed was mankind’s greatest enemy: gravity. The rest of his fascinating story can be found here.

It is with this story in mind that I continue to ride an early wave of success in MMA daily fantasy. As a process-driven player, a lot of effort goes into finally entering a lineup in a contest. I believe that my standardized, consistent approach has a slight edge over the field, and I hope that this edge is enough to be profitable over time.

Where I get a little lost with MMA these past few weeks, is figuring out whether this string of success is a product of my system. Am I simply running hot, correctly picking a series of essentially randomized outcomes? Or is my process truly generating profits? 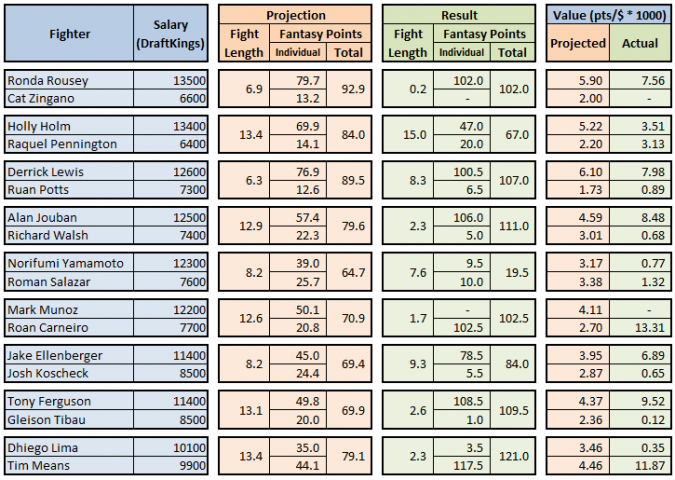 Continuing what seems to be a running trend these past few events, six different fighters scored over 100 fantasy points with first or second round finishes. As with the Silva vs Mir event, it’s difficult to draw conclusions when looking at the projections as a whole.

It seems that certain trends were correctly identified, at least in terms of which fights would be higher scoring and lower scoring. Still, for now I have difficulties drawing conclusions when looking at the event as a whole. I am looking into increasing the statistical rigour of this post fight analysis, and hope to include it in future blogs.

As always, entire goal of the projection system is to identify the best value plays of the night, and combine those into the most cost effective lineup possible. The fighters of note here were Ronda Rousey, Derrick Lewis, and Tim Means.

1) Ronda Rousey was an absolute must play in cash games. While the UFC and its media partners tried desperately to ramp up the hype train on Zingano, there was no logical reason whatsoever to expect the fight to end in anything other than a Rousey first round arm bar. Yet, even with my high expectations of Rousey, I was absolutely blown away by her efficiency in locking down the submission. Those complaining that the fight was too short to justify a pay-per-view purchase missed the point entirely. We do not watch Ronda Rousey to see a great fight, we watch Ronda Rousey to see greatness, and she absolutely delivered.

2) Derrick Lewis, while not as heavily favoured as Ronda Rousey, was actually projected to finish his fight sooner. He was the best value on the board, and pairing him with Rousey was the obvious foundation of any cash lineup. Potts came out looking absolutely terrified to be in the same ring as Lewis. Even though the fight moved at a glacial place, it was evident from the get-go that the only reasonable outcome was a Lewis knockout. He delivered it in the second round, his flurry of strikes moving him past the 100 point threshold.

3) Tim Means was priced as an underdog, but emerged as the vegas favourite by fight time. Such pricing inefficiencies are rare in MMA, as the small pool of fighters and the wide array of betting information available means that DraftKings has a proclivity for accurate pricing. These rare inefficiencies must be taken advantage of in order to maintain an edge in MMA.

The question remained whether to roster Raquel Pennington or Cat Zingano. Typically, I’ll go for the higher ceiling play in cash games. I have no issues with rostering both fighters in the main event, and it has paid off in the past. If the favourite doesn’t win out, you have 5 rounds to accumulate points from two fighters.

In this case however, as I was finalizing my entries, I realized there was no need to hedge Rousey. I concluded that any hesitation I felt with Rousey was the result of the UFC hype machine, and pushed most of my action towards the optimal lineup.

My biggest concern going into the fight card? I thought the Rousey-Lewis-Means trio was too obvious, and achieving a decent ROI might be difficult with the number of identical lineups I was expecting. In the end, Lewis and Rousey were ~65% owned and Means was ~45% owned. High numbers sure, but they still left plenty of room to cash my lineups.

Much like last week, the results are encouraging, but hardly conclusive. Rousey and Lewis delivered the expected outcomes, but Means exceeded expectations with an excellent finish. Considering there were three other fighters on the night who scored 100+ points, had Means won by decision as projected, it’s entirely possible the optimal lineup would have failed to cash on the night.

Though I remain unconvinced that I’m doing anything more than throwing numbers around and getting lucky, it’s certainly much more pleasant to ask yourself questions about process when you’re generating winning lineups. For now, perhaps to my detriment, I will continue to strictly follow my process and hope the positive results continue.

As to the ultimate question; so far all this work has certainly resulted in profitable lineups. I hope you keep following this blog as we find out what future events have in store.