The alchemist is not a scientist, nor a mathematician. He is an artist, searching for truth and order where others only find chaos.

I am thoroughly enjoying playing MMA daily fantasy. As an MMA fan and an avid DFS player, the two make a perfect combination. The events are almost weekly, the small pool of fighters makes research relatively straightforward, the action is 12 months a year, and like any sport, having something at stake can make watching UFC events all the more enjoyable.

Wagering on combat sports is a tradition as old as civilization itself. From the moment early Paleolithic humans competed to see who could pin the other down, those watching competed to pick the winner. The sport of Pankration, one of the earliest known precursors to mixed martial arts, was introduced in the ancient Greek Olympic Games in 648 B.C. In Greek Mythology, Theseus, mythical founder-king of Athens, is said to have submitted the powerful Minotaur using his advanced pankration skills. The sharp spectators who picked Theseus that day likely made a small fortune.

And so on through the gladiatorial games of ancient Rome, the jousting contests of medieval Europe, and the boxing rings of the early 20th century. The ancient tradition of wagering on combat sports lives on today; a fascinating Muay Thai kickboxing gambling culture thrives in Thailand, and the prominence of sportsbooks in Great Britain ensures classic betting on combat sports will continue to exist, so long as the sports they serve retain their place.

For most people however, this timeless art of wagering on combatants has been lost through boxing’s decline in mainstream culture. Yet it remains a wholly unique spectacle; two people, standing toe to toe, fighting for you to make a profit or enjoy bragging rights. My hope is MMA fans and DFS players everywhere will soon experience the thrill of watching their underdog fighter land a first round knockout, and the player base will continue to grow. Based on the UFC posting odds prior to the start of a fight, it seems they have a similar theory.

And so, it is in this modern age that I find myself asking two questions. Is it possible to create an accurate, useful MMA point projection system? Can I build it?

The problem is obvious; not only is MMA one of the more unpredictable sports to begin with (we just witnessed an event where underdogs won nine consecutive fights), but the sample size is absolutely tiny. A basketball player can play 70, 80, or 100 games in a single year, but most fighters will only fight a handful of times. Can you really extrapolate any useful data from such tiny sample? Is it even possible to get a representative sample of fights that can provide the basis for predicting say, how many strikes a fighter will land in his next bout? As far as I’m concerned, there’s only way to find out.

This blog will catalog that journey. Over the past three weeks I have been building and tweaking such a system, and will now put it to the test. Through a combination of bookmaker odds, fightmetric data, fighter profiles, and a touch of intuition and experience, I produce point projections for every fighter according to DraftKings’ scoring system, and build cash lineups with that data. Without further delay: 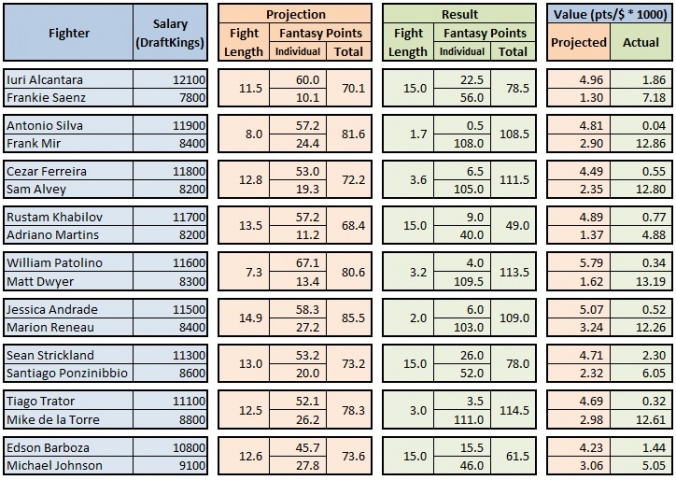 What a night to begin testing! Of the entire fighter pool, underdogs were perfect on the night! Absolutely incredible. Time after time the Brazilian crowd was left stunned as their hometown fighters disappointed. As you can plainly see, in matchups that went the distance, predictions for total points scored in the fight were relatively accurate. The sheer number of first round finishes meant the point totals of several fights were underestimated.

Why total points scored? The system is such that when a fighter wins his fight, he will outperform his projection, and vice versa. Thus, the total points scored in the fight is the best metric to determine the accuracy of the projections. It may prove to be interesting to take the current projection system and also include projected point totals for scenarios where a fighter wins his fight and loses his fight. I will keep this in mind. Of course, all this information is only as useful as the lineups constructed from it.

The entire goal of the projection system is to identify the best value plays of the night, and combine those into the most cost effective lineup possible. The fighters of note here were William Patolino, Marion Reneau, and Michael Johnson:

1) Patolino, as by far the heaviest favourite to finish his fight, was the most obvious play of the night. Suffice to say this did not exactly go as planned as he was knocked out in the first round by Matt Dwyer.

2) Reneau was my favourite underdog pick, and the most valuable underdog pick on the board. All the metrics predicted a fast-paced, high action fight that would go the distance. Typically, this is the kind of performance you seek from your underdogs: lots of strikes thrown, and a chance to squeeze out a decision. The fight began as predicted, but Reneau quickly made Andrade, who had made disparaging comments about Reneau’s brazilian jiu-jitsu belt, eat her words with an excellent first round triangle choke.

3) With the cancellation of the Oliveira- Waldburger bout, Michael Johnson was the only fighter available in the middling price range of $9k-$10.5k, and consequently was a near must play in order to maximize the value of the four other slots. The field concurred, and he was the highest owned fighter on the night at almost 60% ownership.

Mike de la Torre filled out the lineup as the most valuable underdog play remaining. I made the decision to substitute Iuri Alcantara for Antonio Silva, and kept the rest of the optimized lineup. I thought Silva, with his knockout potential and five round bout, had a comparable floor to Alcantara but a higher ceiling. This felt like a great decision for most of the night… until Bigfoot came out and seemingly just stood there waiting to get knocked out.

Nevertheless, my projection system and lineup optimizer combined for 286.5 points, cashing all 50:50s, triple ups, GPPs, and beating all the players who had the misfortune of playing against it head to head. My primary lineup scored a respectable 264.5, good enough to be slightly profitable on the night.

The results are certainly encouraging, but hardly conclusive. As nine underdogs won nine consecutive fights, I do not expect to find anything conclusive digging through the rubble. There can only be so much truth and order on a night where every single professional prediction was flat out wrong. Thus, the questions remain. Was this a fluke? Was it a coincidence that underdogs selected by the optimizer scored two first round knockouts? Or was that the reward for identifying the best values? Is there any predictability here whatsoever? Am I just staring at white noise, finding patterns that don’t exist? Only time will tell…

I hope you enjoyed the read and are interested to see if we can find answers to these questions. Future blogs will examine various aspects of the system in more detail, discuss DFS and MMA in broader terms, and keep track of the only metric that ultimately matters: Is all this work resulting in profitable lineups?