Let us not burthen our remembrance with
A heaviness that’s gone. – William Shakespeare

Part of an ongoing series. For context, see Entry #1 here.

A simple question, yet so much more. A powerful force, capable of drowning the most confident of men down into a sea of doubt.

Emerging as a distance whisper, nestled deep in your consciousness. Once heard, louder and louder it becomes. Soon, “what if?” is deafening, clouding your judgement, ruining any pleasure or enjoyment left to be had. It is not a guide, leading you to future prosperity; but a troll, leading you down a path to destitution.

In order to truly enjoy this hobby, you must learn to let things go. Many a gambler finds himself forever looking back on that one time where perfection was within his grasp. He should only look once, and move on.

I had him in my lineup, took him out right before lock. Of course he blows up.

You made a decision. Examine that decision. Go over it again with the available information you had at the time. Was it flawed? Or would you make it again? In daily fantasy, the line between great success and sheer disappointment can be a razor’s edge.

Or perhaps the decision came down to a coin flip? That happens as well. You placed your fate in the hands of the fantasy gods, like so many of us do when we cannot afford to play both this player and that player, and they decided that today was not your day. So it goes. 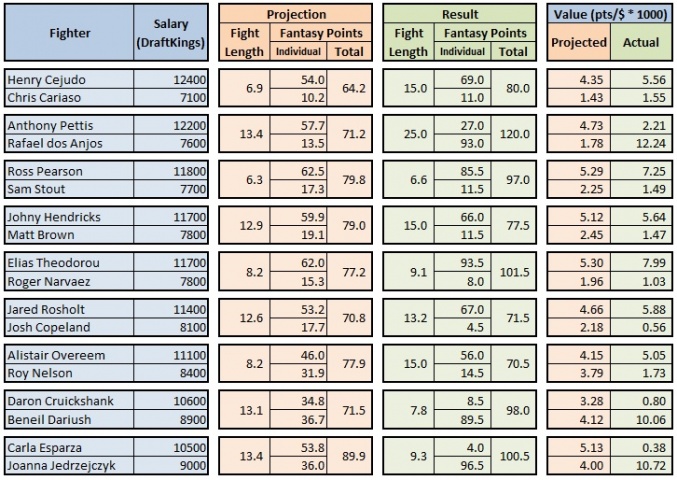 As I continue to gather results and ponder how I can expand on my projections, I’m realizing the potential my system has. Soon I will have enough data to establish floors and ceilings for each fighter, point projections based on winning or losing. For now, through three cards with wildly varying outcomes in terms of finishes and decisions, the only thing I can confirm with confidence is that my point totals are generally too low, by a measurable proportion.

I will make the adjustment ahead of this week’s event, while ensuring my methodology remains untouched. After all, the optimal lineup is riding an unbelievable hot streak.

When I first generated the optimal lineup, it took me only a few seconds to conclude that its floor was too low. I was after all, building a cash lineup. My solution was to lock in Anthony Pettis, and generate a new roster configuration.

The optimal lineup with Pettis locked in suggested I stack the women’s strawweight championship fight. I was comfortable with this approach. The fight was expected to go the distance, and from experience I estimated the fewest amount of points I would get out of both of them would be sufficient. In addition, I was confident that Pettis would defend his title. I concluded it was highest floor cash lineup possible, and locked it in. It was only upon watching the fights that I realized my mistake.

Carla Esparza never had a chance, this was obvious about four seconds into the fight. Those level change fakes did not inspire any confidence whatsoever. The fight was over the second it started. I am sure some sharp bettors, familiar with Joanna’s extensive kickboxing background, made a ton of money on her that night. Esparza a -155 favourite? The lack of history and knowledge on the women’s strawweight division was apparent from Vegas to my point projections to countless lineups on Saturday. The lesson? Focus my tape review on such new and unknown fighters. Not so much time and effort needs to be spent on known quantities. Fights like these are where there is money to be made and an edge to be gained.

Anthony Pettis is a one of a kind talent, but a good fight plan can give him difficulty. Get in his face, be relentless, get him up against the cage. It has worked against him before, and it worked again. RDA is world-class fighter and a deserving champion of course, but in this fight, and it was his game plan and fight IQ which lead him to a decisive victory. I assumed Pettis was by far the safest play on the board, a heavy favourite defending his title in a five round fight. It was a mistake. He is no Jose Aldo or Ronda Rousey.

The floor in my cash lineup ultimately prevailed. It cashed all $1-$20 50:50s, but not the $50. It broke even on H2H. Overall, it lost some money as it failed to cash in triple ups. It was a sound lineup configuration, and I stand by the decision to run it, but there are clearly improvements I can make when evaluating individual fighters. It would be easy for me to kick myself and say “I should have ran the optimal lineup!”, but I simply did not have the information on Joanna to make that call.
—-

And so, just when it seemed the night was lost, I felt a presence. I was not alone. The Alchemist appeared before me. He stood near motionless for what seemed like an eternity, and I dared not say a word. Finally, he looked directly at me, and spoke.

“I see in your eyes the same fear that would take the heart of me. A day may come when the wagers of men fail, but it is not this day!” 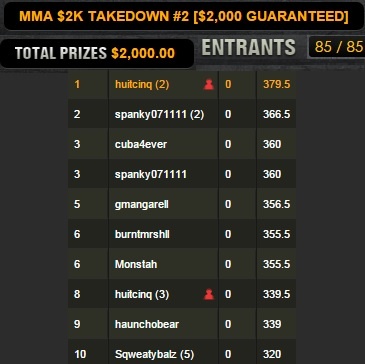 Oh sure, it wasn’t the #1 Takedown (finished tied for 22nd for $168), but $470 is a solid payout on a $27 entry. Most importantly, I finally saw my name come to rest atop the leaderboard. It was my first time, in any GPP across any sport.

Here’s hoping it will happen again in the near future. The hot streak continues.