THE GUY YOU ABSOLUTELY NEED IN SHOWDOWN TONIGHT (KC vs. BAL) NFL 9/28

But First, A Quick Note on Showdown Strategy

Thank you for joining me, before I get to the player you absolutely need in Showdown tonight, I’d like to make a quick note on Showdown Strategy.

Showdown is becoming increasingly more popular and the contest prize pools are getting bigger and bigger ($1M to first tonight in the $10 Buy-in). It’s a wonderful thing and here’s something I think that is getting overlooked in these contests, and that is, how to play them.

Your number one goal in showdown should be to take first place and beat the rest of the field. (Really? Did you need to say that?) Yes, I know how controversial that is to say.

But seriously, people attack these showdown slates in such sub-optimal ways that there are a ton of dead lineups before the game even begins! One thing I’ve noticed when watching videos on showdown strategy, or even looking at other people’s lineups, is that there isn’t enough consideration for the actual salary of the individual player. Sure, you might think it’s just one game and salary shouldn’t matter that much, just jam in the best plays and hope for the best.

That’s where I think there is an edge to be had. People aren’t analyzing mispriced players on Showdown Slates as much as they do on Main Slates. Take for example this past week: Miles Sanders was clearly underpriced at $6,400 and everyone knew it hence why he was 40%+ owned in nearly every contest. If you care that much about salary on a Main Slate, shouldn’t you care the same amount about salary on any given slate? It is the same game we are playing in a sense.

Of course, Showdown is unique and you are obviously trying to put the highest raw point player or point-per-dollar player into your captain spot, but still there are gross mispricing’s on every Showdown Slate and it seems to be going overlooked.

Okay, now if you aren’t asleep reading boring tidbits about Showdown Strategy, let’s actually use the information above to try and identify those mispriced players for tonight’s Showdown Slate.

The Guy You Need

We have arguably the best two teams in football squaring off in what looks to be an amazing game and overall slate. It is also a unique game because it has total of 54.5 which could honestly be too low considering how elite these offenses are and the amount of scoring we have seen the past weeks.

I mention that because you absolutely want as many pieces as you possibly can of the offense from both teams. The only way you’re going to do that is to find the value pieces that make it affordable for you to do so.

Rather than play Russian Roulette with the Baltimore RB’s (Shoutout MrTuttle05) I have a player that makes even more sense and comes with lower ownership and at a steep discount.

Try not to throw up when you read it but the player is: 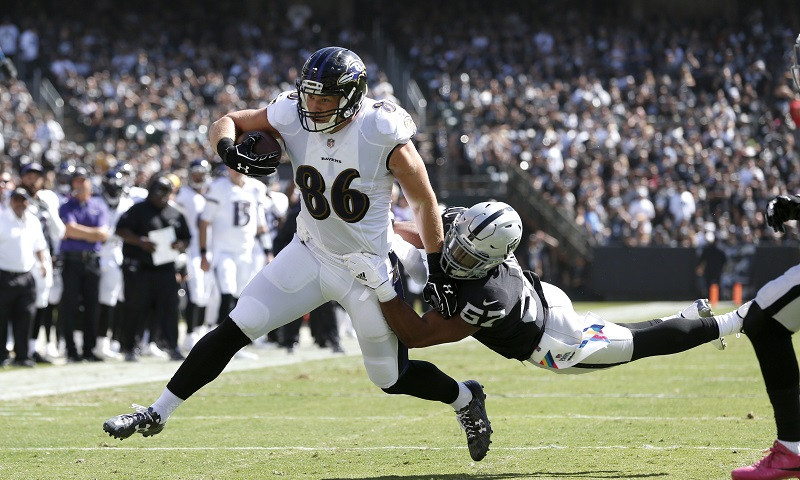 I know I know. If you clicked out of the article right after reading that I don’t even blame you. But hear me out.

Nick Boyle is quite literally free on the Showdown Slate tonight. He’s $800 and to me that is absurdly cheap. If you take away the name and look at some of the data you might be able to stomach the play.

Nick Boyle was on the field for 66% of snaps in week 1 and 78% of snaps in week 2. That leads the entire Baltimore offense in avg.% of snap counts through two weeks (Myles Boykin was #2 who I also think is an awesome play tonight). I’m sure you are saying “yeah so what, who cares he’s a blocking tight end who’s there almost entirely to block.”

You’re not wrong! But when he does run routes he is at least a weapon that Lamar will throw too in open space. Right now he has a player prop of Over 15.5 receiving yards at -112. He has 4 targets through 2 weeks which obviously isn’t anything to write home about but they at least exist. The kicker for me is that he has the exact same odds for a touchdown as Willie Snead at +425 a piece.

If Boyle runs a route at the goal line and happens to catch a touchdown in broken coverage, we are looking at a player who is giving you potentially 10x or more on his salary! I also want to make it clear, if it isn’t already, that you should only be playing Boyle in the Flex position. He doesn’t have enough upside to warrant using a captain spot on him.

After reading all of that I can see you saying out loud, “Imagine writing a entire article on Nick Boyle. I couldn’t agree more. But the point is not really about Nick Boyle and us banking on a very unlikely touchdown. The point is the ability to fit in Lamar Jackson and potentially Patrick Mahomes in that very same lineup which could end up giving you more points than playing say a Willie Snead and J.K Dobbins together to save salary.

Remember, what we are trying to do is beat the field and come in first. Nick Boyle gives you that leverage and much-needed salary relief on a slate like tonight. Play Nick Boyle and may the football gods have mercy on our degenerate souls.