After farting around the first few months, February gave me a fighting chance at meeting my four figure goal. Let’s keep things rolling in the right direction as we “march” toward the finish line! #dadjoke

Sunday was a very solid start to the month, profiting a little over $70 thanks to cashing on both slates on FD, both slates on Yahoo, and this big one on DK: 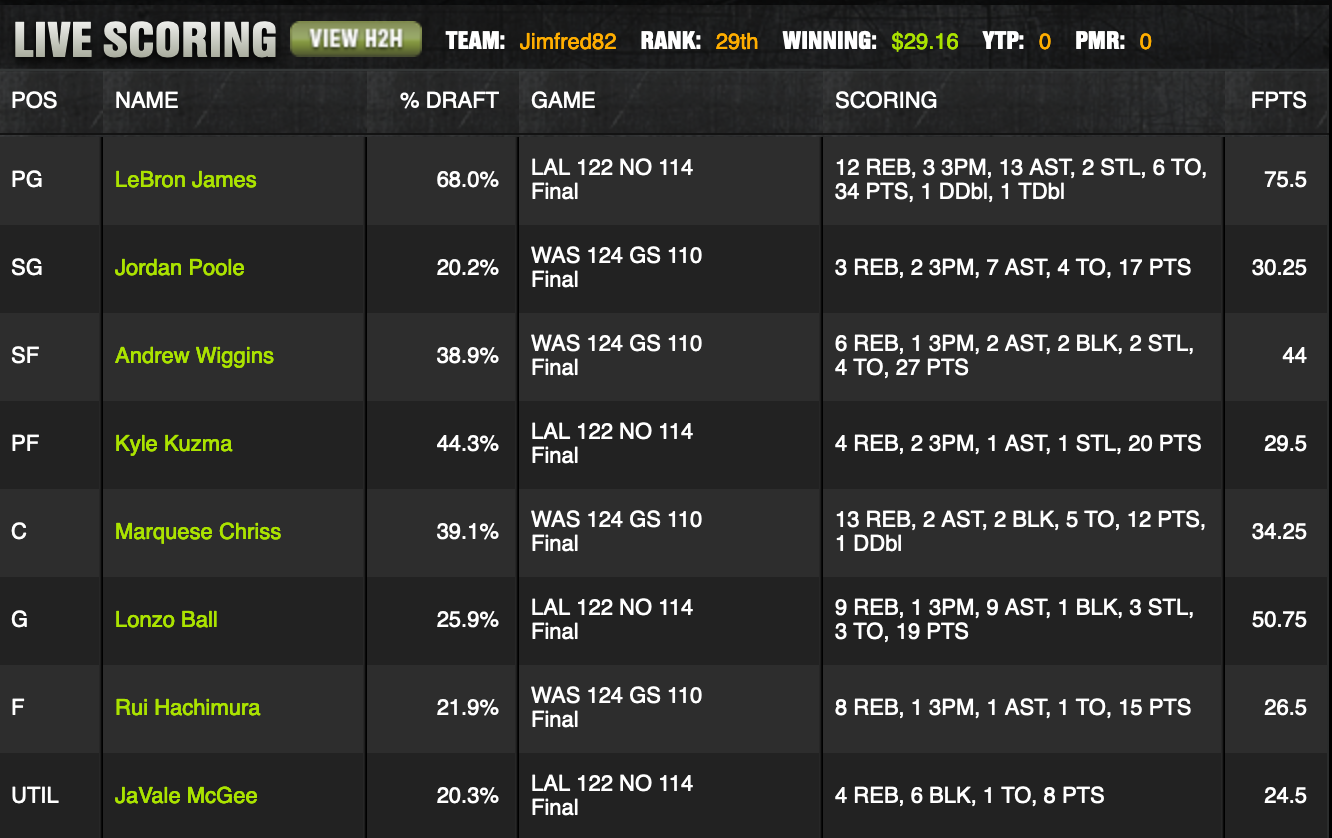 Then, on Monday, with the weirdness of so few available SG’s but no Porzingis, I actually had the same situation as I did last week on FD, with a “too good to be true” lineup that actually worked really well for me (along with about 700 others, unfortunately, making this 11th place finish more of an “11th”): 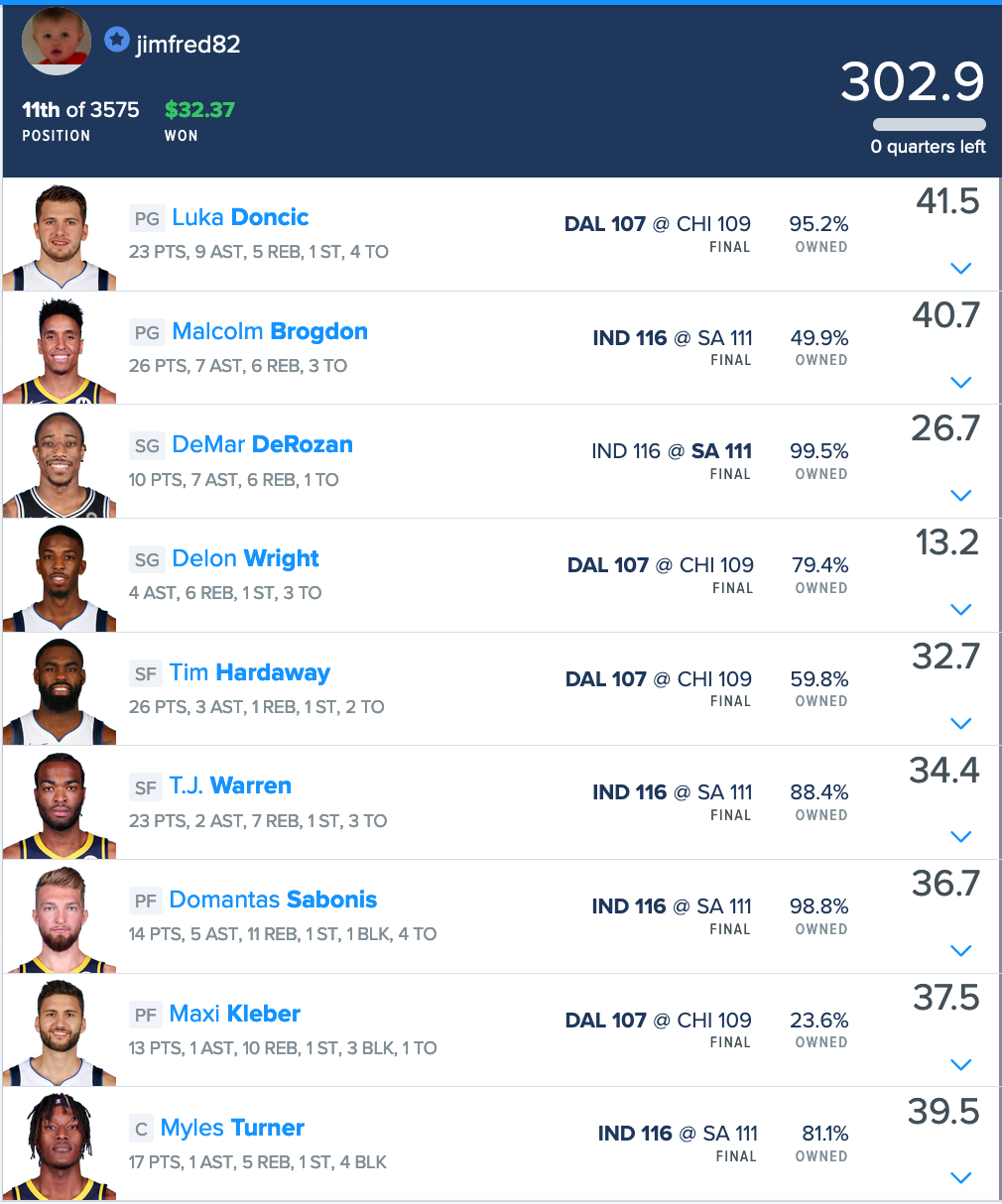 I also quintupled up on DK, and 10x’d on Yahoo, mainly thanks to Patty Mills and Denzel Valentine: 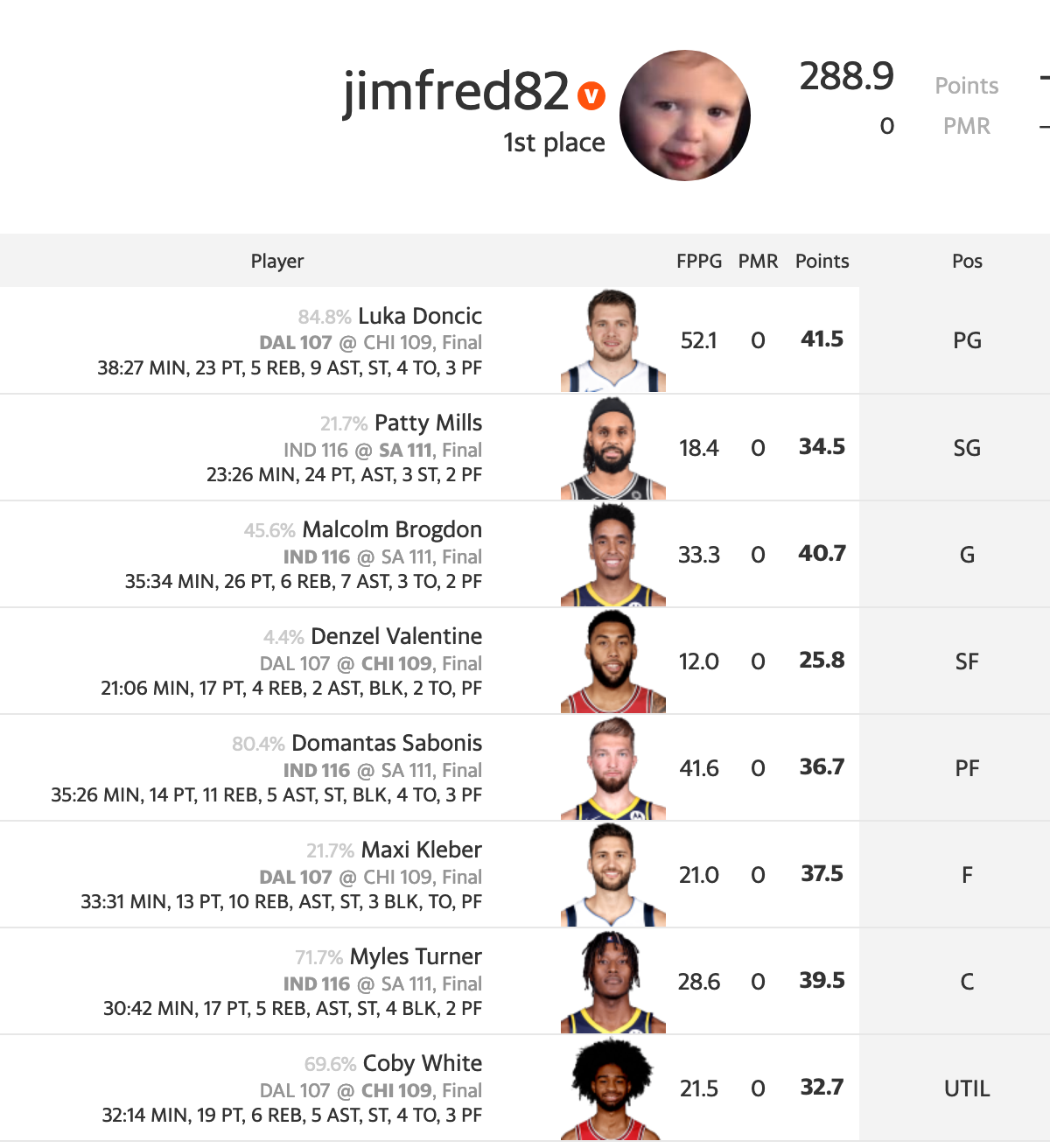 Tuesday night I actually was able to watch some NBA with my buddies, which is rare, and I really just needed Mike Scott to start for me to have lineups I felt good about. Well, he did, and I did, and fell just short on FD and flopped on DK, but had a third straight big night on Yahoo thanks to the aforementioned Scott and his rockbottom ownership, as well as a surprisingly low owned Brow gem: 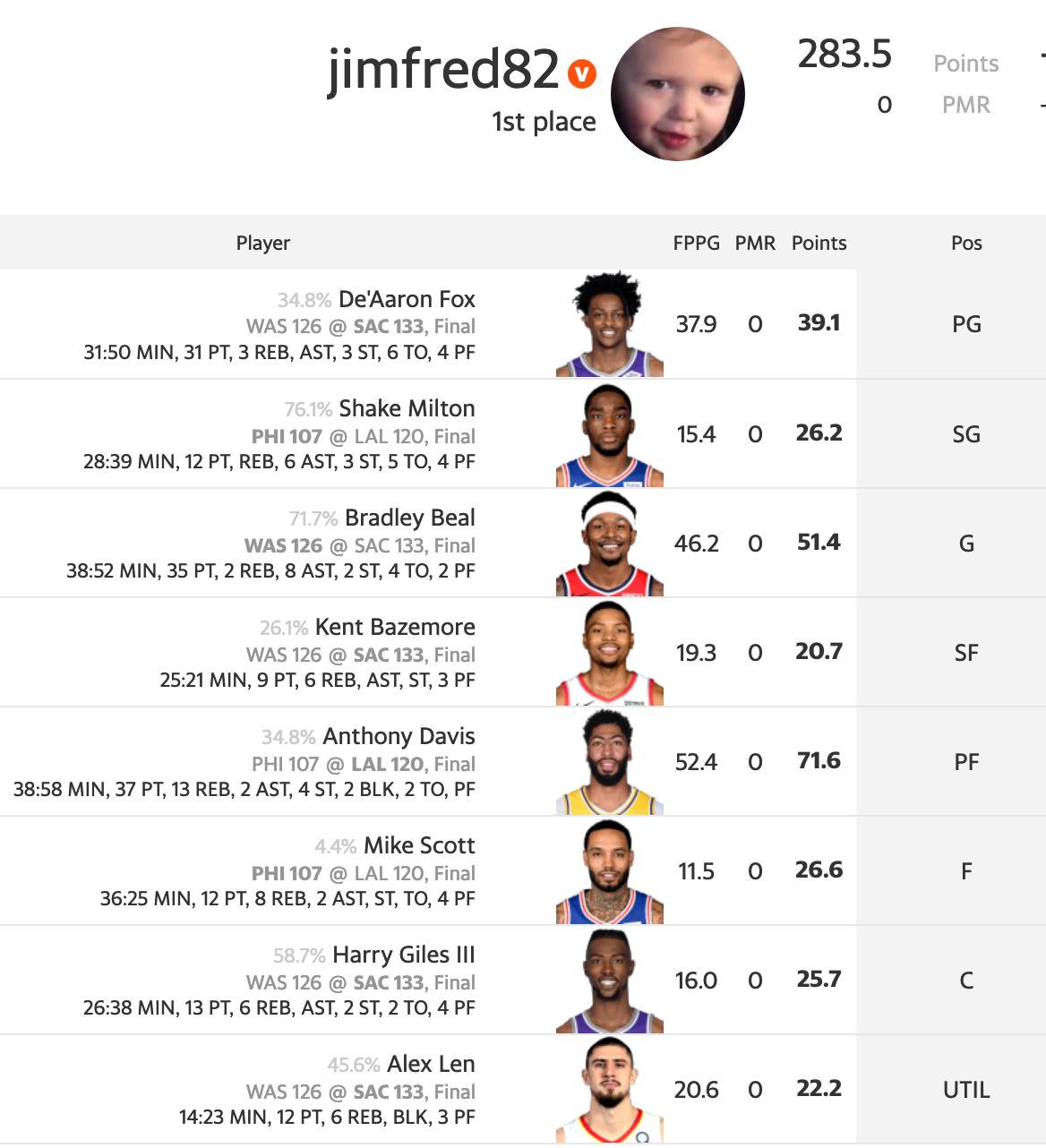 Too bad these Yahoo games don’t go into my Grinder profile? Speaking of that, I saw that I graduated from “Flyweight” to “Bantamweight” today, so that’s cool!

Tuesday brought a slight dose of reality back as I had most of my guys (due to value plays and salaries) in the wrong, non-OT game, but still managed to slightly profit on the night, and on Wednesday and Thursday, more of the same, with more or less breaking even. As usual, on Friday, I didn’t embarrass myself or really do anything amazing in the Yahoo tourney, just missed a cash on FD and Yahoo, but made most of it back on DK. And, to cap off what was a wonderful week, I really didn’t have a very good night overall and still managed to cash on FD, mitigating an oh-fer and managing to go my first week all season where I didn’t have a single night all week that I didn’t go cashless.

On Sunday, the Yahoo league started earlier than the late FD and DK ones, and, on there, I wasn’t too great. Fortunately, I did manage to have double ups on both FD and DK thanks to a lot of OT on DK and a lot of Raptors on FD (and jumping 4k spots in the fourth quarter), and then on Monday, with Buttholzer doing all kinds of weird stuff with the Bucks’ starting lineup, I decided to pull all of the namebrand guys (Lopez, Middleton) and hope that they would DNP (especially Middleton, since I knew he’d be very highly owned) and I could get a massive leg up on the field. Then, Normal Powell went down a minute in a half into the game and DiVincenzo (who apparently is a veteran now?) also DNP’d, making all my forward thinking moot anyway, which was a pretty lol example of DFS at it’s most random. I stand by those decisions, though, despite how things turned out… but man, that sucked, especially when you consider I was still profitable on the night, even with lineups like this: 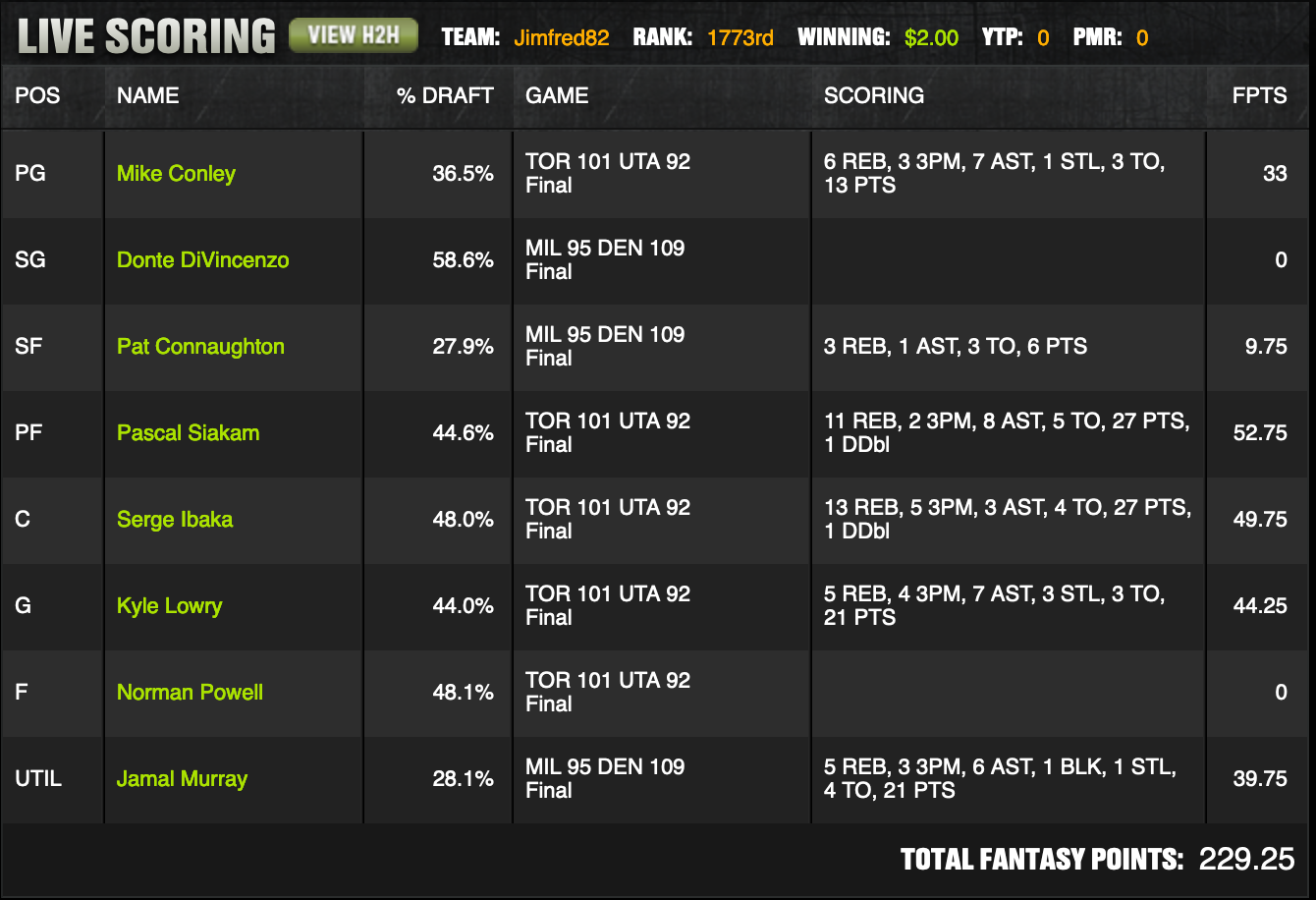 Tuesday night didn’t bring too much injury news other than Dwight and Sweet Lou, which basically meant I was going to go all-in on gulp McGee, but that did allow me to open up my lineups quite a bit, and after a first quarter that saw him amass 11 fantasy points, I was feeling pretty good. Then, everything imploded and I had enough to minimum cash on FD. Fortunately, I had actually had a really good Showdown lineup on DK earlier in the night with a 6x payout anyway, so it all ended up okay in the end, but honestly, that’s two pretty nasty nights in a row. Then, the icing on the cake (and not just from a DFS perspective) was Wednesday night, when, despite having Boban, it ultimately didn’t matter since NBA (and sports in general) were put on hiatus indefinitely. It was nice of FD and DK to refund, though…. but man, this is some crazy stuff. 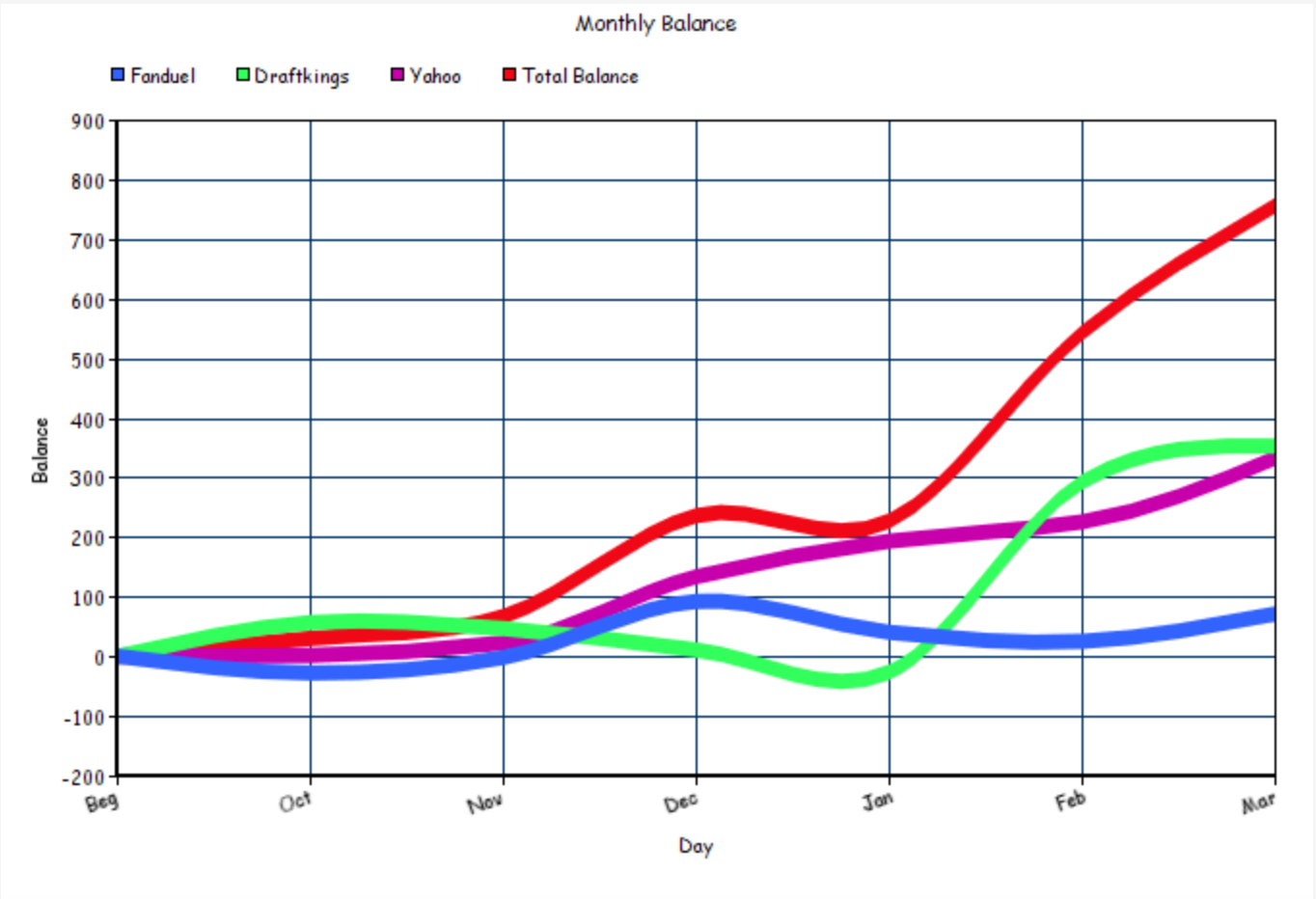 Thanks to a solid start to March, if the challenge were to end today, I would end up at $756, which is pretty much where I would need to be in order to successfully complete the $1000 challenge. So, if the 30 day suspension of games ends up being the end of the regular season, I guess you could say this has been a success. However, since we’re all in unprecedented territory at this point, I’m hoping the league will resume and we can continue where we left off, whenever that may be. But, right now, nobody really knows what’s going on, in the NBA or really in anything else.

Speaking of the future, be safe and smart, my friends. I know that everybody on the internet is already an expert on everything that’s going on already, so I won’t give any advice on what you should or should not do, just to try and take advantage of these non-sports times to reconnect with your family and friends, and enjoy your (hopefully short) break from all things DFS. I know we all love this game, but, at the end of the day, it really is just a game, and there’s a lot more to life than DFS. So, stay safe, and hopefully see you all again soon… and hopefully sooner rather than later, life as we know it can get back to normal!