To achieve success (i.e., +EV) as a college football Grinder, it is absolutely essential to be aware of what is happening in the locker rooms in those schools. In the NFL, injuries are reported mid-week and closely monitored by the media thereafter; in the NCAA, unless it’s a top-10 university, you will have to search the local newspapers to glean valuable information about injuries, suspensions, personnel changes, and the like—doing this research takes time…and, if you’re like me, time is a limited commodity. So I extract the most of my limited time by first using a spreadsheet methodology to help identify key games, matchups, and other factors to help narrow down my selections for a full slate of NCAA games.

Here, I will describe how I approach a full day of NCAA games using a spreadsheet system for this weekend’s Draftstreet “The Big Score II” selection of 25 games. While I can’t possibly list every angle that I employ to extract information for a given Saturday within the parameters of a single blog post, I will attempt to demonstrate how a spreadsheet can be exploited to give you an edge over your opponents. There are, however, problems with using spreadsheets and I will try to point out some of those shortfalls along the way…let’s go!

Any seasoned Grinder will tell you that Vegas should be your starting point for player and game selection; Vegas has hired people far smarter than you and me to implement and employ algorithms that are accurate beyond what any single person can accomplish on their own. Therefore, the first thing that I do in my weekly spreadsheet generation is to import the following information into my spreadsheet:

After this information is entered into my spreadsheet, I can immediately deduce how Vegas sees the game playing out, with projected scores for each team. I subsequently sort the team totals from high-to-low and highlight which teams will be the highest-scoring; I also do the opposite to avoid selecting players from teams who are projected to score less than 21 points (my arbitrary cutoff). If you want to take a shortcut, Rotogrinders puts together a similar spreadsheet each week under “Vegas Odds & Lines” in the “Daily Research” tab for college football—I construct my own because I want to add to it (see below) and also complete it earlier than it is generally posted on RG.

Here, I take advantage of one of the many tools RG has to offer: I import the data for “Defense versus Position” in the “Daily Research” tab for college football—this information is essential for tracking how a given defense performs against the run or pass. In the end, I’m only trying to narrow down the field, so I eliminate everything except for the overall ranking against a given position. I do this for QB, RB, and WR; TE’s are a total crapshoot in college football (save Jace Amaro), so there’s no sense in wasting time trying to predict the unpredictable…just pick the cheapest tight end who catches > 1 catch per game on an offense projected to score more than 28 points and hope you get lucky.

Once all “versus position” defensive rankings are listed, I sort and highlight them; the top 30 defenses for each position get a red highlight and the worst 30 defenses are highlighted green. This acts as a visual tool for further analysis.

After I have setup the spreadsheet as described, it’s time to perform my initial analysis. The first thing that I do is to re-sort the “team total” column from highest-to-lowest (I explain why below). Note that I haven’t mentioned a single player or salary yet—I focus on understanding the matchups before I ever look at a single salary; this way, I never fall in love with a player prior to seeing his matchup. Here is a list of things that I look for in the spreadsheet with examples for this weekend’s games, where applicable.

1) OBVIOUS SELECTIONS After sorting the ‘team total’ column from highest-to-lowest, it becomes easy to see the positional matchups that I want to target. For example, Indiana is currently projected to have the highest scoring offense this weekend with ~ 43 points scored; scanning to the right to look at positional matchups, you can see that Purdue is 107th against the run this year. That, combined with the fact that Indiana is a 20-point favorite, indicates that the Hoosier running game should be targeted. At this juncture, I take a peek at the options and see Tevin Coleman ($13,241) and Stephen Houston ($8,867); Coleman has been injured for 2 weeks now & Houston has seen 21 carries over those 2 games, an equal split with D’Angelo Roberts (not offered by Draftstreet). That said, those 2 games were against Ohio State and Wisconsin—2 top-5 defenses against the rush…so I’m comfortable rolling with Stephen Houston this weekend at $8,867 when he’s playing against a terrible rushing defense. His upside is huge (120+ yards and 2 TD’s is not out of the question) and his floor is minimal, providing Coleman doesn’t return this weekend.

2) SANDWICH SELECTIONS One of my favorite analyses is to look at how a defense plays against all 3 positions (QB, RB, WR) and look for a ‘sandwich’ whereby the highlighted color is the same on the outside, but different on the inside. This week, look at Rutgers’ defense against UConn; Rutgers is horrid against the pass, ranking near the bottom of all of Division I football in both categories…however…they are much better against the run (28th in the country). One might conclude that if UConn is to win this game at home, they’re going to have to employ their passing game; their QB (Casey Cochran, $7,588) is a cheap option with the ability to achieve value (averaging 17.5 points over the past 2 games) and will assuredly be owned by very few entries this weekend. Al_Smizzle would call him an “R&R” player! 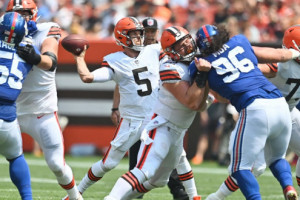 3) FADE SELECTIONS One of the smartest things you can do as a GPP player is to avoid the bust-of-the-week. Example: Last weekend in the NFL, Case Keenum was the ‘sneaky value play’ going against the putrid Jags. The Texans didn’t show up & Keenum busted many, many fantasy teams; if you avoided him in your GPP’s, you likely bypassed ~25% of the field in the process. Looking at our spreadsheet, one thing that immediately jumps out at me is the Florida-Florida State game: 44 total points and both teams are highlighted as having ‘red’ matchups. The average NCAA fan wouldn’t hesitate to roster Jameis Winston this weekend because he’s in the Heisman race and he’s going up against a Florida team that just lost to Georgia Southern, an FCS team, last week…but don’t be fooled—Florida’s defense is no joke (Vegas agrees) and Winston’s salary ($17,168) is too lofty to expect him to achieve value this weekend. Let the suckers roster him, while you look elsewhere.

4) AVOIDING MISCUES Last point: Do not overvalue the spreadsheet — It is only a tool to help pinpoint potential value selections! There are times when common sense will tell you that your spreadsheet is just flat wrong. For example, Michigan’s defense is ranked 19th against the run and highlighted as a ‘red’ matchup for Ohio State, which might lead some people to believe that Carlos Hyde will have a poor showing on Saturday. I don’t agree. Michigan’s running defense is ranked high because they haven’t played a team with a great RB most of the season (exceptions are Abdullah and Langford, each of whom scored ~ 18 fantasy points in their respective games); this weekend, they’re facing a team who is projected to score 36 points and is 6th in the nation on the ground—I expect respectable numbers for all ball carriers wearing white (Braxton & Hyde) this weekend.

The biggest lesson one can learn from incorporating spreadsheets into their DFS homework is to use them for what they are: a tool. I would estimate that 30% of my lineups are based on my spreadsheet and the remaining 70% is based on logic, player information, Vegas odds, and salary/value. The information that can be garnered using a spreadsheet is instrumental in larger game sets where it is near-impossible to thoroughly research every game, which is why I use it weekly for college football. This blog post represents just a sneak peek into a few of the ways I utilize my spreadsheets while constructing lineups…please feel free to use the comments section to explain alternative spreadsheet analyses that you routinely use. If any of this has been useful, please leave me a comment below until the RG vote system is fixed. More comments = more blog posts. Thanks!