Week 6 Starts of the Week

It’s that time of the year in fantasy football, where your team is looking great until you start piling up some injuries and get hit by ugly bye weeks. Nothing sucks more in fantasy than bye weeks, so you have to look deep into the players list to find the right guys to plug in for your injured and bye-week’d players. All of these value plays also pertain to daily leagues on Fanduel, Draftstreet, and all other daily fantasy sites. 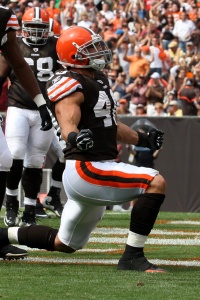 There have been some very good players available in the past few weeks on both yearly league waiver wires and weekly league cheap plays, such as Ryan Torain, Jackie Battle, Eric Decker and Doug Baldwin. This week, the question is who will be the guy to break out and lead your team to victory, and hopefully profit.

Eli Manning vs. Buffalo – The stats are all there, and while Eli didn’t have that great of a game for Giants fans like myself last week, he is a great value play this week. The 1st place Bills rank 31st against fantasy quarterbacks, so expect some big plays by Eli and company. Eli has been improving each week and although he has been plagued by the turnover bug this year, he can still put up some big time fantasy points and for that reason alone is worth a look this week. The Giants receivers are beginning to come together, so use Eli with confidence this week.

Curtis Painter @ Cincinnati – Purely a bye week/big time cheap sleeper, Painter has putting up great fantasy points since he took over for Collins and is worth a start against a just ok Bengals defense. If you are looking to go cheap on Fanduel or Draftstreet then I highly recommend starting Painter at QB this week.

Ryan Torain vs. Philly – Torain exploded for 19 carries, 135 yards rushing and a touchdown in week 4. The Skins had a bye last week but if he gets the nod vs. the 32nd ranked rush defense in the league he is a great start this week.

Peyton Hillis vs. Oakland – Oakland has an awful rush defense (31st overall), and is a good play this week now that he’s healthy. Montario Hardesty is also a good sleeper this week.

James Starks vs. St. Louis – Going up against another bad rush defense (Rams are 30th overall), and he’s been getting the majority of the carries over Grant so far. This could be his breakout week.

Anquan Boldin vs. Houston – The Texans defense just lost Mario Williams, their number one pass rusher, and have already been struggling against the pass this year. I would use him and expect good results this week.

Victor Cruz vs. Buffalo – Why not? The guy has had 3 huge weeks already this year, is cheap on Fanduel, is available in a lot of yearly leagues, and most of all is getting thrown to by another start of the week! Start Victor until he proves that he shouldn’t be started.

Good luck to everybody this week! I’ll try to put together this article each week for the rest of the season, and highlight who I think will step it up from week to week. Start these guys with confidence!