Week 7 Starts of the Week

It’s another week in fantasy football, one that’s being highlighted by a few big news items – Felix Jones and Jahvid Best are out this week, Brandon Lloyd has been traded to the Rams, and Carson Palmer is now a Raider. With all these moves and injuries it is time to capitalize on them and weed out the best possible value plays this week. The following are just a few value plays to take a look at when making your Fanduel, Draftstreet, or any other site roster for the week.

Tim Tebow – All week you have probably been hearing about Tebow. You can’t get away from him in the media, but it’s finally time to put him to the test and see if he has what it takes to be a good NFL QB. He’s playing in Miami for “University of Florida” day so the crowd will likely be very much on his side, and the Dolphins defense has been subpar against opposing passing games this year. In his few starts Tebow has never put up less than 24 points. It’s a great matchup for Tebow and he’s a great value play on every site this week.

Curtis Painter – So far, Painter has produced very efficiently in two of his three starts this year. The Saints defense, who just got lit up by Josh Freeman, have not been very good agains the pass this year and that makes Painter a great value play this week.

Earnest Graham – I’m feeling really happy about adding him in all three of my leagues and plan to start him on fanduel this week as well as he has a great matchup and has been running the ball really well. The Bears are giving up 122 yards per game on the ground this year, and Graham looked really impressive in his first start of the year. Expect double digits.

DeMarco Murray – If you read as much about fantasy as I do you have probably read about Murray this year in some sleeper articles. He has a lot of talent and it’s finally his time to shine in Dallas with Felix Jones out indefinitely. He should get a lot of looks this week against the winless St. Louis Rams and is definitely worth a start on all sites with his low price and very good possibility of high reward. Start him! 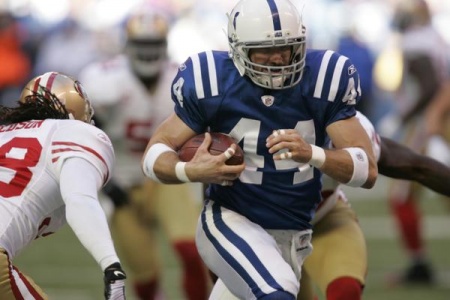 Calvin Johnson – He is a start of the week every week, and although this is obvious I’d just like to say it anyway because if you are not starting him every week on these sites you are missing out. He is almost guaranteed a touchdown every week, and though he didn’t score last week he still has 10 touchdowns in his first 6 games. I’d really recommend starting him and then going with some lower value plays elsewhere.

Anquan Boldin – The Jags have given up a league high 5 touchdowns to opposing #1 receivers and look for that to continue as Boldin should get a lot of looks this week. He’s finally coming into form and makes a very good start this week.

Dallas Clark – He’s finally getting some looks in Indianapolis and now that Painter knows that he can be a great weapon in the offense (7 targets and a TD last week), he might finally start to produce well.

Baltimore – Up against Jacksonville, they’ve been great all year, just a perfect start this week.
Oakland – KC’s offense has been awful and no reason not to start them.

Good luck this week everyone!