Week One NFL Contests are Live on Fanduel! Let the Fun Begin.

Today when I loaded up a Fanduel Lineup entry screen I saw hashmarks instead of a baseball diamond in the background and I couldn’t have been happier. Football games are open for business! I’ve played quite a bit of basketball and baseball since last football season ended, but secretly I’ve just been biding my time, waiting for football. When I heard NFL games were launched I headed straight to the lobby and sniped a game against some noob named TommyGMets86 just to get my first look at the initial salary structure.

Fanduel is the first site to launch Week 1 games. It’s surprisingly early to have a salary list out, but I’m not complaining. I’ll take a look at some of the salaries in this blog. If you don’t yet have a Fanduel account it’s time to get one – don’t forget to sign up through our Fanduel Incentives program to get the best deposit bonus and freerolls. 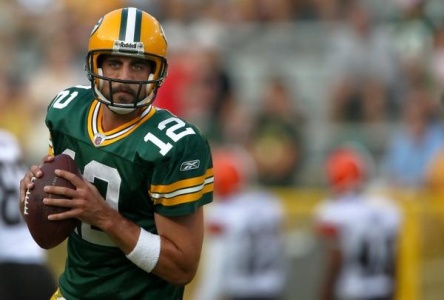 There’s only a $1400 difference between Mike Vick or Aaron Rodgers and David Garrard. It will be tough to not go with a premium option at QB. If you’re looking for potential high value you’ve got to scroll pretty far down the list. Tarvar is buried in there somewhere if you look hard enough, in the $5k range. Look for him to be the sleeper pick on week 1 Tournament teams, but don’t touch him with a ten foot pole in your heads up matches.

LOTS of serious talent is grouped right around the 6700 range, a full $3k cheaper than the top option (Arian Foster). You can get Mark Ingram for $5500 – if the hype tide on him keeps rolling in at this pace he will be on every single team come week 1.

VJax at $6700 and Mike Williams at $6900 were the two values that really caught my eye. I think Fanduel did their best job with salary distribution in this section. I don’t see any must start cheap guys now, but I’m sure some will emerge as the preseason plays out. The Rams WRs are all cheap, but they’re playing the Eagles and their Miami Heat-style secondary, so I may wait a week before testing them.

I really don’t like what Fanduel did here for 2011. I was one of the less than 25% that voted to completely eliminate the K spot. Instead they kept it and they raised the minimum price for a Kicker to $5k. The most expensive K is $5500. We’re forced to give more consideration to this position now instead of just picking the cheapest starting K and moving on. The big tournaments got decided by the K position wayyy too much for my taste. I wish they would have at least cut the K scoring in half.

They all cost $5k. Zoobird must have been tired by this point :)

Check out the Fanduel salaries and let me know in comments if anything really stands out to you. I’ll be here twiddling my thumbs until kickoff if you need me.