Who Wants to Be a Best Ball Millionaire?

Who Wants to Be a Best Ball Millionaire?
By, Chris Felicetta

Thanks to the good people at Draft, someone is going to win a million dollars in a best ball contest this football season. I am fairly certain that someone is going to be me. Will I put that money towards a new apartment or the beach house that I’ve always wanted? Will my first trip be to Italy with the girlfriend, or Vegas with my degenerate buddies?

Before answering these pressing questions, I only need to outlast over 165,000 other entrants. Say what you will, but I like my chances.

In all seriousness, taking down a contest of this size is obviously an absurd long shot. My $25 entries are no more than well researched lotto tickets. I’m not #howrich enough to have the max 150 entries and I’m not delusional enough to think I’m better than the deep bankrolled pros that do. I respect the knowledge, skill, and work ethic of the people that are profitable enough to do this full-time.

I am just a regular guy with a day job who loves fantasy football. I’ve been playing season long with my friends for 20 years and DFS for the last 5. I know it’s not the most plus EV way to build a bankroll, but it sure is fun to chase that life changing, million-dollar score.

The season starts in 5 weeks. I thought it would be an informative exercise to do one draft per week and analyze the results of each. The evolving results of my drafts should highlight some of the trends in player value as we move from training camp through the preseason. It should also help illustrate what your team might look like when drafting from various starting positions.

I plan to have 25 total entries in the contest, the 5 that I am going to analyze here and the 20 that I’ve already done. At times I’ll refer back to my earlier drafts (the first of which were done on June 3) for perspective. In the 20 drafts that I’ve completed I’ve only picked in the top 3 once. I am starting to think that the fix is in.

With that said, I hope you’ll join me on my quest to become the first best ball millionaire. Let’s break down the results from my draft on July 30: 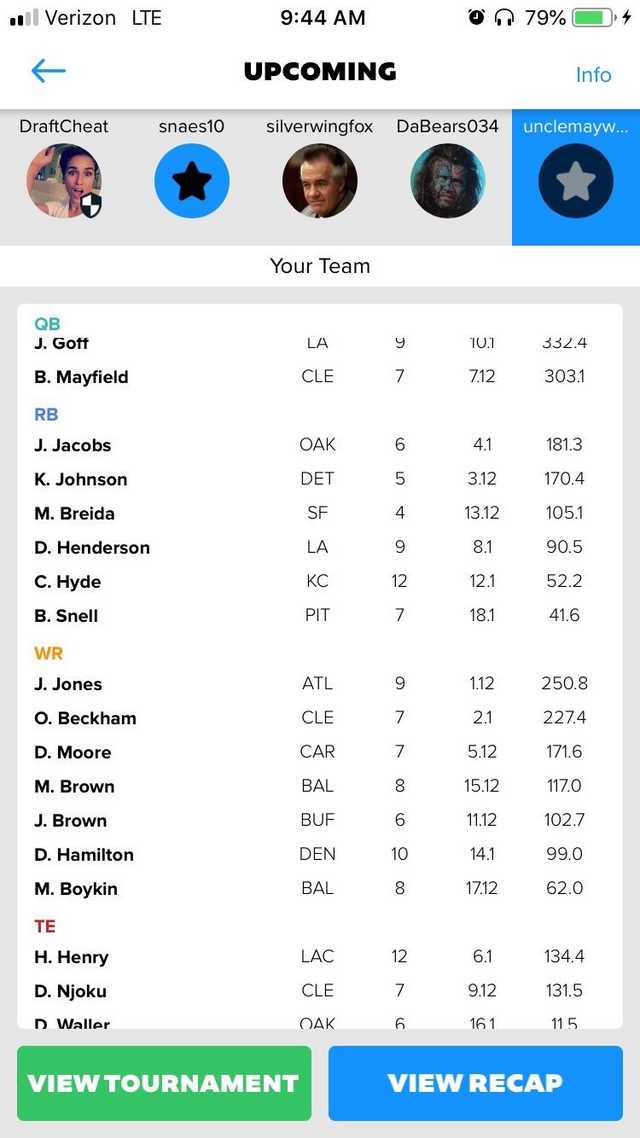 I’ve done about 20 of these drafts and I tend to like my teams better when I pick a running back in the first round. I tend to like my teams best when I get two running back in the first 3 rounds. I simply prefer the WRs I can get in rounds 5-10 to the RBs in that range. I’d rather go to battle with the Christian Kirks and Curtis Samuels of the world as opposed to the Jordan Howards and Sony Michels. That said, it helps to have a little lottery luck to implement this strategy.

One can certainly debate the order they should be ranked, but most agree the first tier of running backs includes Saquon, McCaffrey, Kamara, and Zeke. With Melvin Gordon falling due to his holdout, DJ and Lev Bell form a two man mini-tier behind the four studs. You need to be drafting in the top half of the round to be assured one of these true 3-down backs.

Unfortunately, my lottery luck mirrors that of the Knicks, the clown show NBA team for which I root. I drew the 12th pick and drafted on the turn. As much as desired a RB, I didn’t force the issue out of position. I instead settled on blue-chip WRs Julio and Odell. The Falcons play 13 games in domes this season, which bodes well for Jones. As a Giant fan I’ll always love Eli, but I watch him every week and trust me when I say that he is beyond WASHED. The capital letters are warranted. He has long lacked either the ability or confidence to throw the ball down the field. Baker Mayfield lacks neither. The upgrade in QB play that Odell will receive is even greater than most perceive. If Beckham plays 16 games (far from a lock given his history), he will put up numbers that can win your league.

The most interesting thing to happen in the first round of this draft was Zeke falling to the 8th spot. Perhaps those who passed on him with picks 4-7 are still scarred from Bell’s holdout last season. I expect good old Jerry will find a way to have Zeke off the Cabo beaches and in the Dallas backfield by week one. If Elliot’s contract situation gets sorted, those who drafted him at a discount will be sitting very pretty.

Tyreek Hill went off the board at pick 1.10 which (karmic considerations aside), makes me feel great about the two teams I drafted early in this contest, when I was able to score him at picks 10.5 and 11.7. Obviously, those teams look stacked and I feel good about my chances of winning those 12 man leagues. I only have two discount shares of Hill. I’m sure there are sharp drafters who bought in a lot more heavily on Hill in early drafts. So, while I am grateful to have gotten a taste, I don’t feel particularly advantaged by this unique change in Ty-Freak’s draft price.

Josh Jacobs and Kerryon Johnson being available on at 3.12 and 4.1 made waiting on RB a lot more palatable. John Gruden once gave a rookie Cadillac Williams a staggering 290 carries. Chucky will not hesitate to put the rock in the hands of his versatile first round pick out of Alabama. Kerryon Johnson showed immense potential as a 21 year-old rookie averaging 5.4 yards-per-carry. Theo Riddick getting cut should only lead to more 3rd down work and increase Johnson’s usage.

I may have reached a little bit at QB to secure Baker Mayfield with pick 7.12, but I believe it is essential to have some correlation on your roster. I love stacking Baker and Beckam. Now I’ll just cross my fingers and hope that the hype train does not run over the Browns, who for the first time in decades bear the burden of expectations.

I am very comfortable having Goff, entering his third year in the McVay system, as my second QB. He has his full compliment of receivers with Cooper Kupp returning from ACL surgery. The former number one overall pick should be more of a focal point of the offense as the Rams look to limit Todd Gurley carries. Explosive rookie RB Darrell Henderson, who I drafted at pick 8.1 is expected to pick up some of Gurley passing down work. He could prove to be a sneaky effective stack with Goff.

I was hoping to draft Evan Engram on the 5-6 turn, but got sniped by one pick. The athletic TE should be a target monster as the Giants’ WR corp has been decimated by a dumb trade, injuries, and suspension. I instead settled for Hunter Henry who will be favorite red-zone target of Phillip Rivers now that Antonio Gates his finally retired. For this team to succeed I am counting on a big year from the Cleveland offense, so I was happy to add Njoku to the stack as my second TE.

I was really high on Hollywood Brown and Miles Boykin coming into the NFL draft and was disappointed that they both landed in run first Baltimore. The reports out of camp, however, have been positive on both the rookies. At picks 15.12 and 17.12 I feel that Brown and Boykin are worthy dart throws who should be capable of a couple spike weeks.

All told, this is probably not my favorite of the teams I’ve drafted, but I do like its upside. I am heavily invested in the Cleveland Browns. What could go wrong with that? If Josh Jacobs and Kerryon Johnson produce to the higher end of their expected outcomes this should be a very competitive team.

Feel free to reach out on Twitter or in the comments to let me know what you think of my draft. If you think you can do better, purchase RotoGrinder’s insanely comprehensive draft kit, which for a limited time includes a free $25 ticket to this very contest. I look forward to seeing you in the draft room.