Who Wants to Be a Best Ball Millionaire: Part 2, The Pack Stack

Who Wants to Be a Best Ball Millionaire: Part 2, The Pack Stack
By Chris Felicetta

Welcome back to the five-week column where I break down my entries into the 3.5 Million Dollar Best Ball Championship. If you missed last week’s introduction, you can catch up here.


The lottery gods apparently still hate me. I found myself drafting from the 12 spot again. 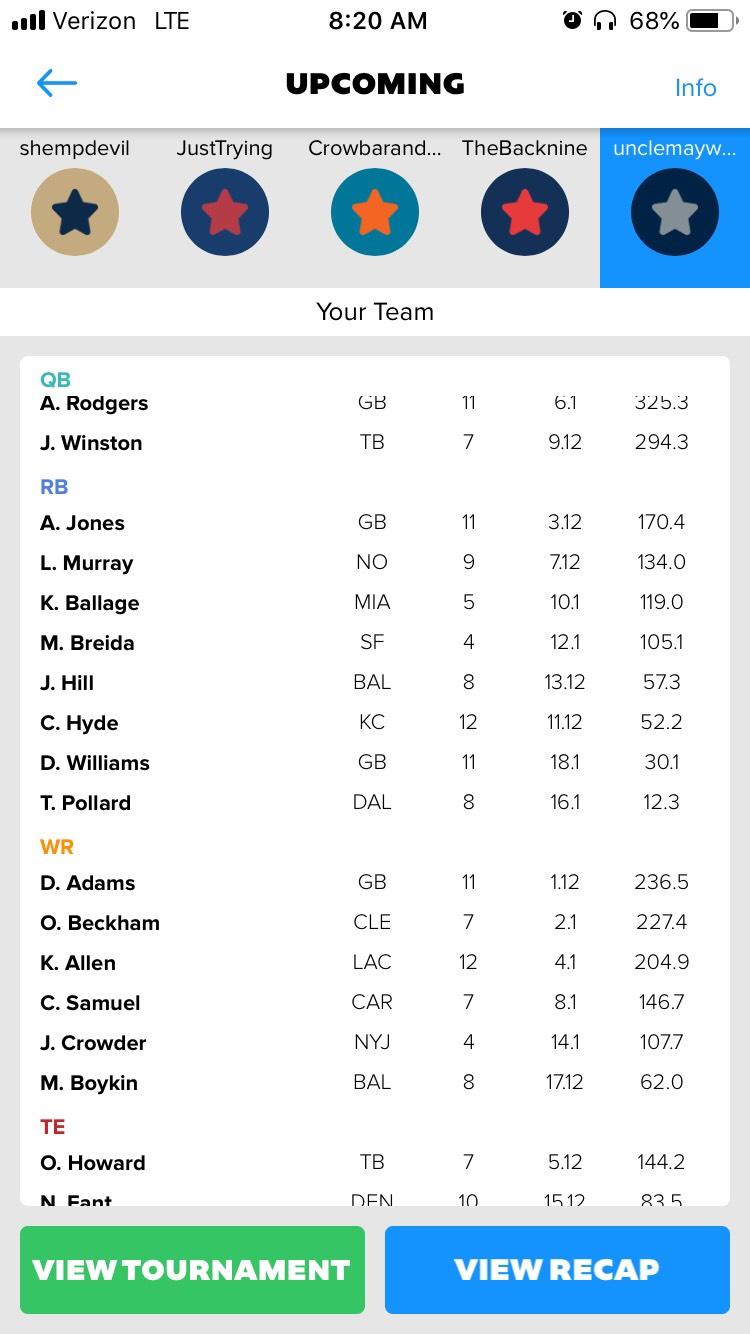 I have a very hard time not drafting two wide receivers when picking on the turn. I already have more Joe Mixon shares than I am comfortable with and I’m not as high on James Connor as most. If you are going to start you team with two WRs, you can do a lot worse than Adams and Beckham. Touchdown equity is especially important for receivers when you are only getting .5 points per reception, as is the case with Draft/FanDuel scoring. I expect both Davante and Odell to be frequent visitors to the end zone in 2019.


Paying up at receiver meant nervously waiting 23 picks to see what running back would be available to me on the 3-4 turn. The answer would prove to be Aaron Jones. According to Pro Football Focus, the talented Packer back lead all 87 qualifying RBs over the last two seasons with 5.5 yards per carry. In the great Green Bay tradition of Eddie Lacy, he put up these numbers despite being relatively fat. Apparently, Jones has cleaned up his diet and trimmed his body fat percentage from 11 to 5.3 this off-season. If he can get over a recent hamstring injury, the new coaching staff will likely grant the fantasy community’s wishes and #FreeAaronJones.


Keenan Allen has shaken off an early career label of “injury prone” with consecutive 16 game season. I was delighted to score the LA target monster as my third WR with pick 4.1.


There’s no reason to enter a contest this top heavy if you aren’t trying to take it down. I seriously doubt someone is going to outlast 165k competitors without some roster correlation. When I realized that two of my first three picks were Packers, I made the decision to target Aaron Rodgers. I generally prefer to wait on the position, thus in over 20 drafts, I had yet to take the Green Bay QB. This seemed like the perfect situation to get a little exposure to Danica’s boyfriend. I scooped up Rodgers at 6.1, which is a reach, but there was almost zero chance he would be there when I next picked at 7.12.


The Packer schedule breaks very nicely for some spike weeks late in the season when the money is going to be won. They play the Niners, Giants, Redskins weeks 12-14, potentially three of the worst defenses in the league. Hosting the Bears week 15 is a tough match-up, but if your team advances to the championship deciding week 16, Green Bay plays indoors at Minnesota.


I had a productive 7-8 turn scoring Latavius Murray and Curtis Samuel. Few, if any player has received as much training camp hype as Samuel. As a result, his ADP has been swiftly rising. I’ve seen sharp drafters pick him early in the 6th round. Scoring the Carolina WR in the 8th felt like a win.


I added a little more correlation to my roster taking Jameis as my second QB with pick 9.12, four rounds after grabbing his TE,OJ Howard at 5.12. PFF’s Scott Barrett had a great stat noting the 12.0 yards per target that Howard recorded last year was the third best that they’ve ever tracked at the position. If OJ stays healthy he should put in huge numbers in Bruce Arian’s “no risk it, no biscuit” offense.


I’ll stack my top four receivers of Adams, Beckham, Allen, and Samuel up against anybody’s and feel good. My running backs? Not so much. I fired a bunch of darts at the problem in the late rounds (Ballage 10.1, Hyde 11.12, Breida 12.1, Hill 13.1, Pollard 16.1, and one more Packer, Dexter Williams at 18.1). None of these guys are certain to have a significant role, but I can make the case each of them. I don’t need all of them to pop in order to be competitive, just one or two.


When you only draft one running back in the first six rounds, you are certainly going to be vulnerable at the position. That said, I love my pass catchers and the Green Bay stack could be formidable. Hit me up on Twitter or in the comments to let me know what you think, and be sure to check back next week as I continue to chase this million dollar dream.