Who Wants to Be a Best Ball Millionaire? Part 3, Chaos is a Ladder

Who Wants to Be a Best Ball Millionaire? Part 3, Chaos is a Ladder
By, Chris Felicetta

We need to take a quick trip to King’s Landing to analyze my latest entry into Draft’s 3.5 Million Dollar Best Ball Championship. Back in Season 3 of Game of Thrones, when the show was still well paced and brilliantly written, Varys and Littlefinger have a famous discussion in the throne room. The Spider contends that “Chaos is a gaping pit waiting to swallow us all.” Littlefinger counters that “Chaos is a ladder.”

For the purposes of fantasy football, chaos is uncertainty. Chaos is Zeke and Melvin Gordon holding out. Chaos is Andrew Luck mysterious calf injury. You have to decide if you want to be Varys or Littlefinger. Do you want to avoid the uncertainty that could potentially sink your whole season? Or do you view the chaos as a ladder to climb above the competition?

In season long format where you only get once chance to make a first round pick one can easily justify the Varys approach and take the negative view of uncertainty. Why risk sabotaging your entire team for Zeke when a safe pick like Davonte Adams is readily available? However, it requires a vastly different strategy to beat 11 of your college buddies than it does to win a 166k entry best ball tournament. Drafting from the sixth position, I decided to take Zeke Elliot in an attempt to climb Littlefinger’s ladder to a million dollar payout. 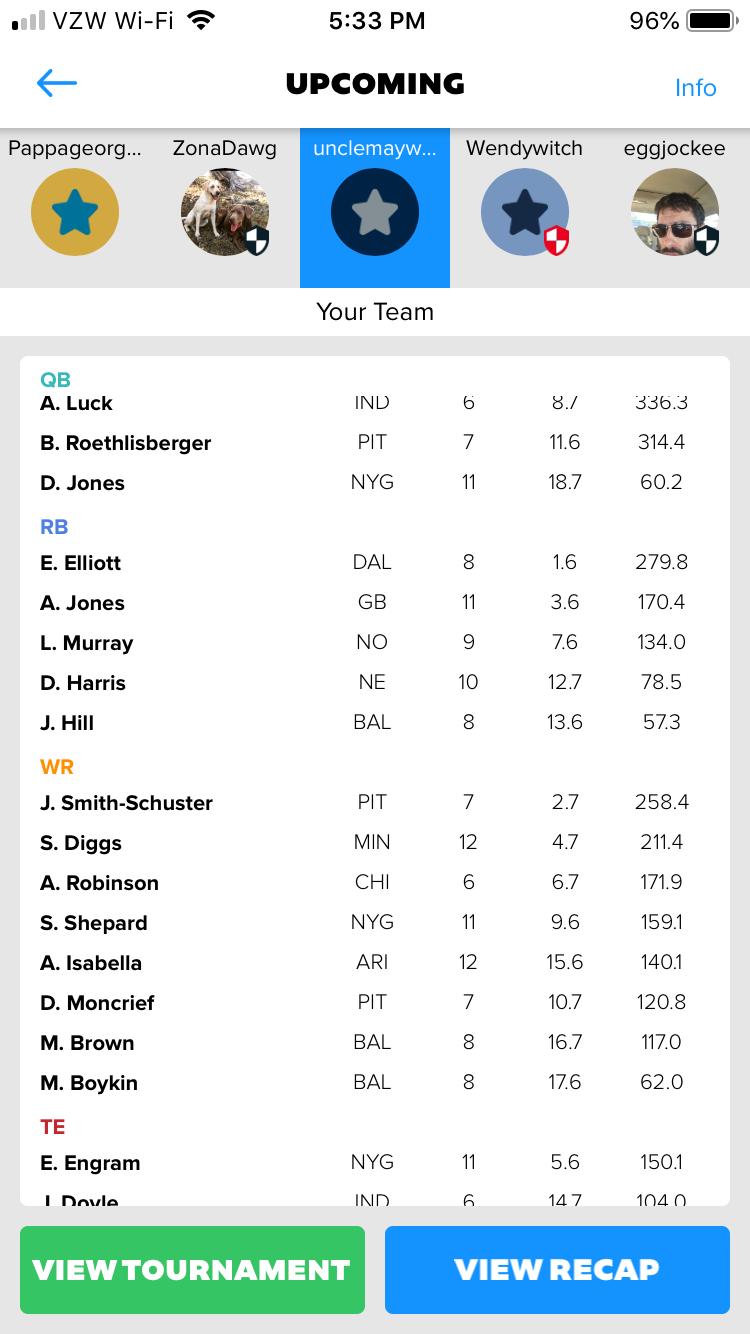 I followed Zeke with picks of JuJu (2.7), Aaron Jones (3.6), and Diggs (4.7). Each selection was made with a mindset of targeting upside. At 5.6 I took Evan Engram, who is by far my highest owned TE. I tend to like my teams better with him or OJ Howard in the fifth as opposed to paying up for one of the big three tight ends. Engram’s ability to stay healthy and produce will go a long way towards determining if I am profitable in this contest.

I doubled down on the decision to embrace the uncertain by taking the discount on Andrew Luck at 8.7. In earlier drafts, before the news of his calf injury broke, I often selected him in the sixth round. With the additions of Parris Campbell, Devin Funchess, and a healthy Jack Doyle, I figured Luck had to chance to challenge Mahomes as the highest scoring QB. With this already being a boom or bust entry, I crossed my fingers and went a little deeper in on Luck at the lower price.

Once I had the core of my team set, I shifted my focus to building some correlation into my roster. I selected Moncrief (10.7) and Big Ben (11.6) to stack with JuJu. I added Doyle (14.7) as my second TE, to couple with Luck, I love pairing Hollywood Brown (16.7) and Boykin (17.6) together super late in drafts. I don’t believe Lamar Jackson is as bad of a passer as he is generally perceived. I predict that two talented Baltimore rookies will combine for enough spiked weeks to approximate one WR that is drafted much higher.

One might wonder what the hell I was doing drafting Daniel Jones in the 18th round. As a Giants fan who was furious when he was selected 6th overall, I see this as a valid question. This pick was inspired by a strategy that the always sharp @JMtoWin explained in a podcast on his One Week Season website. JM spoke of a few drafts where he intentionally selected Josh Rosen in last round and stacked him with a few Miami pass catchers.

The idea behind that approach is that Rosen (or Jones in my case) is almost never drafted, but will very likely be starting late in the season. So, if the young QB happens to have a career week in 15 or 16, when the big money is being decided, you will almost certainly be the only one alive with that stack. This is not as crazy it may seem. Surprise spike weeks from rookies Josh Allen and Sam Darnold won people GPPs late last season. Already having Engram and Shepard on the roster, I decided to roll the dice with Giant QB, who also provides some sneaky rushing upside. If I win a million dollars on this entry thanks to Daniel Jones, I promise to give the child that I’ll probably never have the initials JM. What kid wouldn’t want to be named after a fantasy football analyst?

Please reach on Twitter or in the comments to let me know what you think of my Littlefinger inspired lineup. Will I end up on the throne, or like Petyr Baelish bleeding out on the floor?