Who Wants to Be a Best Ball Millionaire? Part 4, Young Chiefs

Some days it feels like there is almost too much good fantasy content available. My headphones are a constant stream of analysts touting their sleepers and ripping their busts. On my subway ride to the office, I’m told Lev Bell will have fresh legs from the year off. By the time I pour my first coffee someone else is advising me to fade him because Adam Gase never commits to one running back.

I’ve become leery of paralysis by analysis, but sometimes a take cuts through the noise, causing me to rethink my process a bit. A remark from Davis Mattek stood out most to me this week. He essentially said that he tries to never leave a draft without a Kansas City Chief. (It’s disturbing that I can’t even give proper credit because I listen to so many podcasts and can’t remember where it was said. Shit, I’m not even 100% sure it was Davis. Apologies if it wasn’t.)

Anyway, the simple, off the cuff comment rang true. Kansas City has the best quarterback, the best tight end, the best play-caller, last season’s top-scoring wide receiver, and they’ve added two dynamic rookies. What are the chances someone takes this thing down without a Chief on their roster? These thoughts were fresh on my mind as I entered this draft. 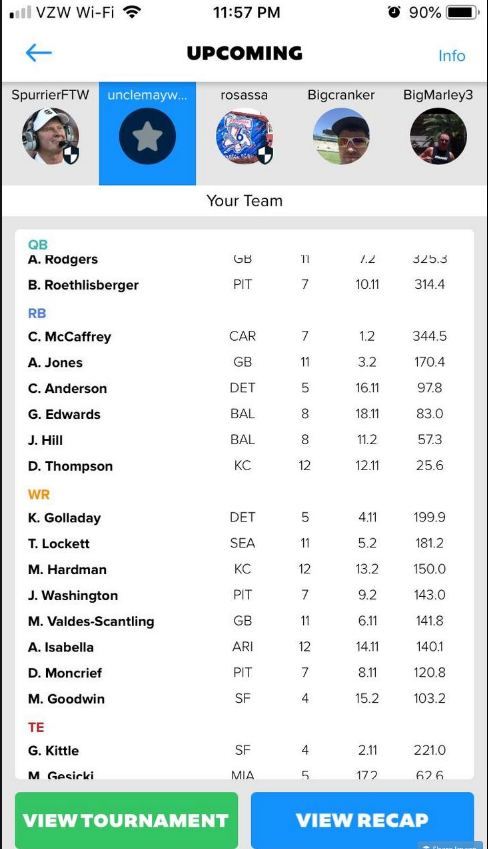 I have seen people put together some scary looking Chief stacks by taking Kelce in the late 1st, Hill in the early 2nd, and reaching for Mahomes in the 3rd. Once I drew the second pick, this strategy was obviously out of the question. I would have to wait to shop for my Kansas City exposure in the discount racks.

I generally pick McCaffrey over Kamara when given the choice. Both players are PPR monsters in productive offenses, but I am more confident in McCaffrey’s total usage and touchdown equity. He out-touched Kamara last year 326 to 275. While Latavius Murray is not Mark Ingram, he is one of the league’s most efficient goal line backs and light-years better than Cameron Artis-Payne or any other jobber sharing McCaffrey’s backfield. This team was drafted prior to Thursday night’s preseason game that left Cam Newton in a walking boot. So, that is a bit concerning.

I can’t stop drafting Aaron Jones in the 3rd round. He is my highest owned RB. Popular late-round flier Justice Hill is my only running back who even close in ownership percentage. The decision often comes down Jones or Fournette. I just trust the GB offense more and I’m more confident that Jones will have a significant roll in the passing game. I continued to show faith in the Packers by pairing MVS with Aaron Rodgers in the late 6th/early 7th.

Much ink has been spilled and radio air time filled debating who is going to be the number 2 WR in Pittsburgh. Donte Moncrief has been getting the lion’s share of the snaps with the 1s this preseason. James Washington has looked more dynamic, but he’s playing against backups. I said fuck trying to guess and took them both. The 8th and 9th round might be a little early to pair teammate like this, but it’s easy to forget that Ben threw for 5,000 yards last season. More weeks than not, one of these two should pop and make it into my optimal roster. Once I made this move, there was little choice but to tack on Roethlisberger in the 10th as my second QB.

We’ve finally reached the part of the draft where I was able to go to the outlet store and get my cheap Kansas City exposure. “(player-popup #mecole-hardman)Mecole Hardman”:/players/mecole-hardman-982694’s ADP in this contest has been a roller coaster ride. In first two drafts I did way back on June 3, he went in the 8th and 6th rounds. In those same two drafts Tyreek Hill went in the 10th and 11th. After it was announced that Hill would not be suspended, Hardman’s stock plummeted. He was readily available in the 14-15th round only a few weeks ago. An impressive TD reception from Mahomes in a preseason game has the rookie on the rise again. I’ve seen him go as high as the 9th round, so I was happy to score him here at 13.2. Andy Reid will find a way to make use of the talented youngster, and if Hill or Watkins happen to miss time he could smash.

Darwin Thompson is the hottest name in fantasy football right now. A lot of people are already taking victory laps on Twitter for stocking up on him months ago in the last few rounds. I had a couple of Thompson shares before his preseason glow up, but not nearly enough. I’m not going to sit here and pretend like I was grinding his Utah State tape. Seeing Darwin accelerate in the open field I had a mini panic attack and thought “oh shit, I should have drafted more of this guy.”

In retrospect I should have been more in on Thompson earlier. I am almost completely fading Damien Williams and we’ve all seen enough of Carlos Hyde to know he’s just another guy. This is where I think a willingness to admit a mistake and adapt accordingly is important. Absent of inventing a time machine to go back in take him repeatedly in the 17th round, the best I could do was get a few more shares before the price climbed further. In the four drafts I’ve done this week I’ve taken Thompson three times, with picks 12.1, 10.4, and 11.1. The one time I missed on him he went in the 7th round.

Will Darwin Thompson be this year’s Philip Lindsay, the late round rookie running back that breaks the slate? If so, I’ll be very happy with my rounds 10-12 shares, even if there are people who got in at a better price. Was I right to dive in headfirst on Thomson or did I overreact to some meaningless preseason action? Feel free to reach out on Twitter or in the comments to let me know what you think.