Who Wants to Be a Best Ball Millionaire? Part 5, No Luck

Congratulations to Andrew Luck. Anyone who can retire at 29 having already earned over 100 million dollars is doing something right. The dude is clearly hurting and did not take this decision lightly. Walking away from a possible Hall of Fame career and upwards of a half billion dollars in potential earnings can’t be easy. I hope the future brings him health and happiness.

Now that we’ve gotten that out of the way, Andrew is my highest owned quarterback in this contest. Shit. I drafted Luck in 10 of my 40 entries. Which means 25% of my teams are basically drawing dead. On most of these teams I only have two QBs. When I draft a QB early (Luck went in rounds 5-8), I generally don’t take a third. Those teams now have only one QB that will score any points and I’ll take a zero at the position on his bye week. It’s going to be hard to turn a profit in a contest while essentially paying an extra 25% rake.

You hope to avoid a scenario like this but, knowingly assume risk when drafting early. By starting my drafts in June, I was able to get Tyreek Hill in the 10th and 11th round. My 17th and 18th round shares of Tony Pollard look pretty good today. The surprise Andrew Luck retirement is the other side of that coin.

Let’s analyze my 40th and (assuming I don’t degen out and tack a few more on) final entry this contest. 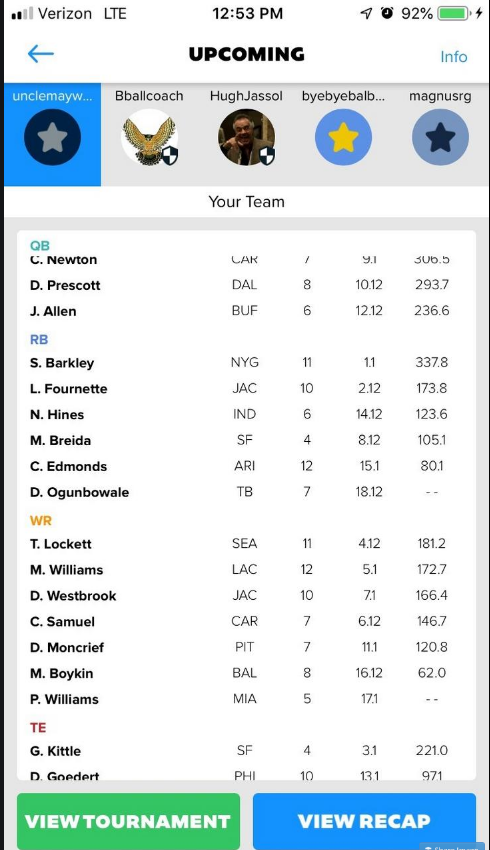 Perhaps the fantasy gods decided to throw me a bone after taking a flame thrower to all my Luck teams. I drew the number one pick and went with the chalk selection of Saquon. I might have gone Aaron Jones at 2.12, but he is already my highest owned RB and shares the same bye week with Barkley. I instead pivoted to Leonard Fournette. The Jaguar RB has a bad rep. The perception is that he was drafted too high, he has a shitty attitude, he’s injury prone, and he’s not involved in the passing game. Sounds like an awesome second round pick, right?

Now let me make the case for Fournette. Blake Bortles is gone. The offense should be much more efficient under Big Dick Nick leading to more opportunities in the red-zone. TJ Yeldon is also gone, leaving no obvious third down back to steal snaps from him. The Jags have talked openly about involving Fournette in the passing game and he has looked surprisingly agile catching balls this preseason. It is obviously a make or break year for the former LSU standout. If he wants to get paid this off-season, you’d expect his best effort/behavior. Please remind me of this paragraph if he’s on the sideline in a month nursing a hamstring injury in Tom Coughlin’s doghouse.

I love leaving the first 3 rounds of a draft with two running backs and George Kittle. The San Francisco TE had only 5 touchdowns in 2018 despite a record 1377 yards on 88 grabs. He is due some positive TD regression with Jimmy G back under center. Dante Pettis’ shaky preseason only further confirms that Kittle will be the focus of the passing attack.

I have no problem waiting until the 4th round to pick my first receiver if the draft-board falls that way. I am consistently happy with the WRs I can draft in the middle rounds of this contest. With consecutive picks of Lockett (4.12), Mike Williams (5.1), Samuels (6.12), and Westbrook (7.1) I feel like I have quality upside despite waiting at the position.

I may have an overreacted to being essentially down to one QB in 25% of my leagues. I invested a decent amount of roster/draft capital on quarterback. Cam Newton (9.1), Prescott (10.12), and Josh Allen (12.12) are all at least duel threats with spike week capabilities.

My fliers in the last two rounds were Tampa running Dare Ogunbowale and Miami receiver Preston Williams. I don’t know much about Mr. Dare, but I am pretty certain that Peyton Barber and Ronald Jones aren’t it and he seems to be the next man up. DeVante Parker and Kenny Stills are both have the potential to be traded or cut. Either scenario would open up increased opportunities for the talented Williams who has flashed in the preseason.

I am going to need one of my 30 non-Luck teams to go on a serious run if I am going to manage a profit. This roster has less correlation than I prefer, but if Saquon has a monster year and Fournette finally pulls his head out of his ass it might have a chance. I hope you’ve found this blog series informative. Hit me up on Twitter or in the comments with any feedback and best of luck this season!