What a World Cup its been so far. We’ve had one of the highest scoring opening rounds ever with teams scoring a ridiculous number of goals through the first 48 games. In fact, there have only been five goalless draws in this tournament, meaning we have been treated to some of the most entertaining football (soccer) that you can expect on the world’s biggest stage. Now we have the round of 16, where single elimination knockout begins. One mistake and your beloved team won’t move on. Players leave it all on the field, and teams no longer play the conservative (lets hope for a 0-0 draw) style. Expect more situations where teams open up the game, and expect more substitutions towards the end of the game that either focus on holding a lead, or try to break a tie.

For this set of games, we will focus on StatClash, who have a GREAT set of games available for the Saturday-Sunday game set. The first of which is the $7,500 World Cup Shootout with a $100 entry and the other is a $1000 World Cup Equalizer with a small $10 entry fee. These events should be appealing to all bankrolls as Statclash are looking to offer over $10,000 in tournament prizes this weekend. So Make sure to get your picks in before the 12:00 PM EST start time tomorrow.

This set of games will include four matches that are all expected to be exciting, so keep your Saturday and Sunday open as we gear up for a wonderful 2 days of world cup knockout stage world cup soccer.

- Due to a chronic illness where he finds his teeth locked on another player’s skin, Luis Suarez will not be appearing in a soccer match for at least 4 months. Suarez has now bit three different players during soccer games. That is remarkable, Even Mike Tyson is asking him to take it easy on the teeth. – The United States is in the round of 16, there is never a wrong time to mention this, but among the teams that didn’t make the round of 16 are the defending champions Spain, Former world cup winners Italy, England and a team with one of the best players in the world in Cristiano Ronaldo, Portugal. USA! USA! USA!

Now on to the picks

Keylor Navas – Costa Rica $23.00 – the Costa Rican goalkeeper is facing the worst offensive team in the Round of 16. Greece only managed to score 2 goals the whole tournament and one of those was off of a questionable penalty awarded in the last second to allow Greece to make it to the Round of 16. Needless to say, Greece does not have the fire power to make it to the quarter finals. Not to mention, Navas has been excellent so far in the world cup with fantasy point totals of 5.5, 17, and 9 respectively in the first three games. Expect Navas to be the most likely goal keeper to maintain a clean sheet, and likely a win if Costa Rica perform as expected.

There are no real value goal keepers in this set of games as they are all around the same price, with the exception of Claudio Bravo of Chile who is facing a very potent Brazilian team on its home turf. I don’t think you should pick Bravo as his chances of a win are the least amongst all starting GK’s tomorrow. 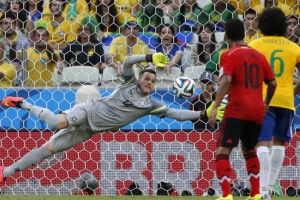 Julio Cesar (BRA) – The most likely team to pick up the W on the weekend slate.

Guillermo Ochoa (MEX) – He’s been the best goal keeper in the opening rounds, but he faces a formidable Dutch offense that leads the world cup with 10 goals scored so far.

Jasper Cillessen (NED) – Mexico doesn’t have many attacking options outside of Peralta and Dos Santos, and both should have less than ideal success against this Dutch team.

With such a significant bonus for defenders with a clean sheet on StatClash, I believe it is a smart move to stack defenders with a favorable match-up. In this case, the Costa Rican defenders Junior Diaz, Oscar Duarte and Christian Gamboa all make solid options on defense. They have each been productive in this world cup so far and they face a Greece team that will struggle to score goals but will allow some crosses and Gamboa has been able to supply a total of 6 crosses for Costa Rica in the three group matches so far.

In cases where you don’t wish to stack, there are several options on defense for players that are capable of producing points.

Mario Yepes – Columbia – He will likely return from injury after missing the third group game for his country. Yepes is capable of defending without giving up fouls, as well as being the victim of fouls when he drives the ball up the field. I would take a flier on him only in GPP’s.

Marcelo – Brazil – I am a big fan of Marcelo tonight as he is coming off a great group stage where he registered 1 assist as well as 8 corners taken. Marcelo plays an offensive defensive position that allows him to roam up the right side and can provide plenty of attack for a potent Brazilian side.

James Rodriguez – Colombia – I expect Colombia to dominate this match against Uruguay and Rodriguez will be part of the reason why they do. In the group stage games he has three goals as well as 2 assists. He has averaged over 17 fantasy points (Statclash) in the first three games and facing a less than stellar offense I Suspect he will come close yet again. Rodriguez has proven that he can step up in the absence of Falcao and becoming the main focal point of the offense. The team has flourished because of it and they have scored a total of 9 goals this tournament. His price is a bit steep and at $23.00 he is the second highest priced midfielder behind only Neymar.

*Neymar*– Brazil – Speaking of Neymar, the man has been on fire in the group stages. He has averaged a world cup best 0.26 fantasy points per minute he has played so far. He can score, cross, and take corners for this team. I suspect he will be the lead scorer in Saturday-Sunday slate on statclash. His talent is unquestionable and anybody that watches him can see why he is one of the top players in the world.

Juan Cuadrado – Colombia – at $18.75, Cuadrado might be a steal if you can afford him. Cuadrado is expected to carry the torch for a mighty Colombia team that expects to move on to the quarter finals. They will have trouble with an Uruguay squad that might win, but Colombia needs to focus their attack on Cuadrado and Diego Forlan in order to have a chance.

Alexis Sanchez – CHI – If anybody is going to score on the Brazilians in this game against close rivals Chile, It will be Alexis Sanchez. Sanchez hasn’t had the best of world cups, he only scored 1 goal and provided 1 assist during the group stages of the competition. But he has averaged 12.08 statclash fantasy points in the first three games. Sanchez might score a few goals, but ultimately it won’t be enough for this Chilean side against a very powerful Brazilian team

Robbie Van Persie and Arjen Robben – NED – the Netherlands are favorites in this game against the Mexican national team. Mexico features one of the best goal keepers in the world, and they will rely heavily on him to have any hopes of advancing. That said, I don’t think they will manage to keep the Dutch from scoring, and given the most recent histories, Robben or Van Persie are more than likely to score tonight. If I had to pick a single player to score, I would go with Robbie Van Persie and his $21.25 price tag on StatClash.