Tuesday is the last day of the World Cup Round of 16. Two more squads will punch a ticket into the Quarter Finals. Argentina will face Switzerland at Noon EST, and the US will square off against Belgium at 4pm EST. The sports-books have Argentina as a 1 goal favorite and Belgium as a .5 goal favorite at the time of this writing. Both games have an over/under of 2.5 goals, but the vig is trending towards the over in ARG-SUI and under in USA-BEL. If you’re new to World Cup DFS, feel free to look at previous blog posts for more general, process-based analysis. On to the plays:

Thibault Courtois (BEL $16,342 DS / $24.25 SC) – Courtois will be starting for one of the two favored sides Tuesday. He is also in the game where the over/under betting is trending heavily (at the time of this writing) on the low side. My heart will be cheering for the US, but my head tells me that the Americans have the weakest offense out of the four squads.

Diego Benaglio (SUI $15,243 DS / $19.75 SC) – Only 4 teams are playing Tuesday, and the salaries are fairly bunched up. Benaglio is the default Value Play because he’s the cheapest. He had fine game for Switzerland in their last match, and should be able to put up positive points once again, although I do not like his chances at a clean sheet against the potent offense of Argentina.

Jan Vertonghen (BEL $6,034 DS / $17.50 SC) – The USA squad has been lining up in a narrow defensive formation in their matches thus far in the World Cup. I expect that to continue against Belgium, since the likely starting fullbacks for the USA’s opponents are used to playing in the middle for their respective clubs. This means the US will be taking their chances on crosses that these converted fullbacks will be whipping in. Vertonghen scored in his last match, and should have ample opportunities to gain an assist in this match with his crosses.

Ricardo Rodriguez (SUI $5,534 DS / $16 SC) – Anyone who has read my articles previously knows that I think Ricardo is a great talent. He makes many contributions in matches that don’t show up on a fantasy score sheet, but he also pushes forward and joins the offense. He had 2 assists in Switzerland’s first match, and has the upside to put up a similar tally on Tuesday.

Stephane Lichtsteiner (SUI $5,050 DS / $16 SC) – Lichtsteiner is always a danger for some cheap fouls conceded, but he has similar upside to Rodriguez. He proved that value last game with an assist. I don’t like Switzerland’s chances at a clean sheet, but Lichtsteiner is one of the bigger risk/reward plays of the day due to his offensive potential. 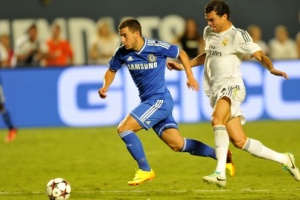 Eden Hazard (BEL $19,238 DS / $18.75 SC) – Hazard is one of the brightest young midfield talents in the world. He hasn’t had a dominating performance yet for his country, but he has the potential to do so in any match. Belgium, as a whole, have looked disjointed in attack, but I have a bad feeling (as a US fan) that they may finally find their way offensively on Tuesday.

Xherdan Shaqiri (SUI $18,374 DS / $20.25 SC) – I’ve had very good luck with picking Switzerland midfielders so far in the World Cup. When I recommended Xhaka, he scored. When I recommended Shaq-daddy, he had a hat trick. I don’t think Xherdan has a realistic chance at duplicating his incredible performance from last match, but Switzerland is likely to field him in the center as a second striker once again for their match against Argentina. They deployed him there in the last match and it paid tremendous dividends. Shaqiri likely has the highest floor of any midfielder tomorrow. Even against a favored Argentina side, he should get a few chances at goals and assists.

Dries Mertens (BEL $12,823 DS / $16.50 SC) – Mertens is listed here because he is the cheapest of the likely starters for Belgium in attacking midfield. He has the potential for a goal and should be able to provide a few shots and crosses as well. 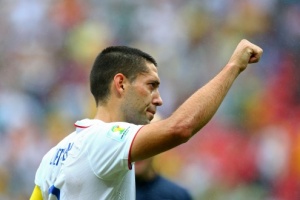 Clint Dempsey (USA $16,323 DS / $17 SC) – As I just mentioned, there are not many guaranteed starters at forward on Tuesday. Altidore may return to the starting lineup from injury, but whether Dempsey is fielded on his own or as part of a striker-partnership, he has the chance at a goal or assist with several shots.

Ezequiel Lavezzi (ARG $14,848 DS / $15.50 SC) – Sergio Aguero is out for Tuesday’s match, and likely the rest of the World Cup. Lavezzi should make the starting 11 as a result, and play as a winger/forward option. At his price, he is a very good value. Just make sure to verify that he is 100% starting before noon EST.

Josip Drmic (SUI $14,045 DS / $16.50 SC) – I am providing two value options because Drmic deserves a mention for his performance in Switzerland’s last match. He had a dynamic game, with 3 shots on target, and 4 key passes according to Whoscored.com. His partnership with Shaqiri in the new-look Swiss formation last match was a great success. It has the potential to cause problems against the Argentina defense as well.