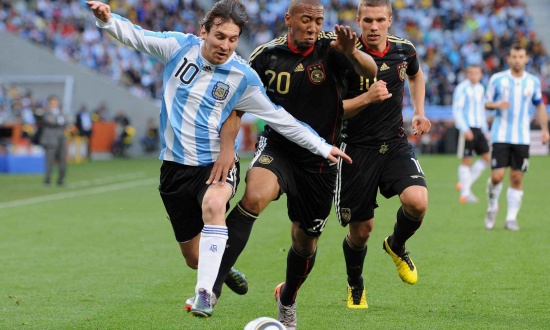 Welcome, fellow Grinders! Wednesday is another day of game three’s, which means some teams may rotate players, some teams are playing for a spot in the knockout rounds, and some teams are just playing for pride. I’m here to help you make sense of the madness.

Argentina has booked a spot in the knockout rounds, and only has to draw with Nigeria to ensure the top spot in their group. They may rotate the squad a bit to keep some players fresh, but luckily we’ll have their lineup prior to lock. I won’t get into too many of their options because of the lack of certainty, but rest assured that any attacking player that makes the lineup is in play. France has mathematically not guaranteed advancement out of their group, but realistically it would take an absolute disaster, to put it mildly, for them not to advance. There’s a good chance they rotate the squad as well. I will be avoiding them for cash game purposes, but in GPP’s almost their entire roster is in play (as Colombia proved today, even limited time can prove lucrative for some players – check reports and projected lineups in the morning). Bosnia is the only team eliminated, and since it’s their first ever World Cup final, I believe they will still look to gain a result. Every other team has at least a chance to advance.

On the sports-book side of things, Argentina and Switzerland are 1 goal favorites, France is a .5 goal favorite, and Iran/Bosnia are at a pick’em. That last game currently has an over/under of 2 goals as of this writing (although heavily leaning over, according to Bovada), and the other games are at 2.5, with Switzerland/Honduras also leaning slightly towards the over. The Swiss will be my primary targets for cash, as I think they have the juiciest matchup, and many strong players for fantasy purposes. On to the picks:

Asmir Begovic (BIH $17,992 DS / $23.25 SC) – Iran has not scored in this World Cup. They still have a chance to advance, so they may open a bit. That makes this pick a bit risky, but due to the over/under of 2 and Iran not having scored yet, he’s still very much in play.

Vincent Enyeama (NIG $16,728 DS / $18.50 SC) – Enyeama is the last goalkeeper standing (who’s started at least 2 matches) to not given up a goal. (Ochoa was the other, until Monday). Against a very strong and talented offensive team – Argentina – I expect that streak to end. He’s coming off of a very strong club season in French Ligue 1, and has kept that form going in the World Cup thus far, so I think he still has a good chance of putting up a positive score. This isn’t that much of a value play, since he isn’t much cheaper than the top options, but I trust him more than the options below him in price.

Others I like: Diego Benaglio (SUI) / Alexander Dominguez (ECU)

Ricardo Rodriguez (SUI $5,250 DS / $17.50 SC) – I’ve hyped him up before, and I’ll hype him up again. Switzerland are facing a Honduras team that has put up 1 goal in two matches. Honduras will continue to play a very basic, old-school game, hoofing up long balls and fouling away – I think Switzerland will handle them. Rodriguez takes many free kicks, which is very valuable for a defender. He has plenty of offensive upside and a decent shot at a clean sheet, so he’s my top option at D.

Efe Ambrose (NIG $5,545 DS / $15.50 SC) – Ambrose has the offensive upside, but less of a chance at a clean sheet. Enyeama will have to stand on his head again for Nigeria to achieve a clean sheet, but Ambrose has a high offensive ceiling (SOG/Assist-type of match). Nigeria are in good shape to advance from their group, but need at least a draw to make 100% sure of advancement. I expect Ambrose to be a part of their bid for a result.

Mehrdad Pooladi (IRA $3,939 DS / $16.25 SC) – Iran has one clean sheet already, and came very close to holding the high powered offense of Argentina to another. Pooladi is the 4th lowest defender available. If Iran decide to open up, Pooladi does play left-back, and should join in some attacks. If you are punting a D spot and think Iran can keep another clean sheet, Pooladi is your man.

Xherdan Shaqiri (SUI $14,002 DS / $19 SC) – I think the Swiss Shaq-fu and his other awesomely-named midfield partner Granit Xhaka are both in play. Last match, Xhaka was much cheaper and Shaqiri was coming off of the better performance, so I recommended Xhaka. He scored. The prices have nearly equalized and many people will chase Xhaka’s last score, so I’m hoping to pull off the same trick with Shaqiri this time.

Miralem Pjanic (BIH $13,827 DS / $18.25 SC) – Bosnia came into the World Cup with high hopes, and have been one of the bigger disappointments of the tournament. I blame their formation change – they stormed through qualification with a two-striker set, but have gone more conservative thus far in the actual World Cup. Despite Bosnia not scoring their last time out (although they wrongly had one goal ruled out), Pjanic had an amazing match. He had 5 crosses, 6 key passes (a pass that creates a goal-scoring opportunity, according to OPTA), and 2 shots on target. No midfielder is a sure thing, but Pjanic has among the highest upside at the position on Wednesday.

Javad Nekounam (IRA $8,293 DS / $15.50 SC) – “Hot Javad,” as he’s been referred to by a few RG chat regulars, is very much a gamble/high risk play. He really hasn’t done much of note for fantasy purposes in this World Cup. Then again, neither have Iran. Nekounam scored several of Iran’s goals in qualification, and has set up a few chances that just haven’t fallen Iran’s way thus far. Iran still has an outside chance to advance, but they need a win. If Iran breaks their dismal scoring drought, Hot Javad will likely be involved. For his price, even just a one-assist day would be good value.

Edin Dzeko (BIH $16,343 DS / $18.50 SC) – Things have not gone Dzeko’s or Bosnia’s way in this World Cup, as I alluded to in the Pjanic blurb. He’s also facing Iran. I understand if some people are skeptical of playing him due to those factors. On a day that is fairly light with top forwards that are sure to start, he’s still capable of a double digit Draftstreet score.

Emmanuel Emineke (NIG $13,432 DS / $16.75 SC) – As mentioned above, there are only a few sure-fire strikers that will be starting tomorrow. Emineke had an assist in Nigeria’s last match, and he has a good chance at improving upon that tomorrow. The late-game favorites have roster questions (Seferovic vs. Drmic for SUI, any number of France strikers if they choose to rotate the squad) that won’t be answered before lock. Emineke should lead the line for Nigeria, and is a goal threat in any match in which he does so.