I typically play a lot of Yahoo DFS – in fact, it’s where I started playing several years ago – so when I heard about the Million Dollar tournament with the guaranteed $250,000 overlay, I was understandably intrigued. I am typically a cash game player, usually putting about 95% of my spend towards 50/50s and Double-Ups, but the appeal of the payouts plus a generous 25% payout structure (and the knowledge that Christmas bills will be coming soon) led to me max enter yesterday.

Here is a quick glance at my 10 lineups, but here is the winning lineup by Binduinit (who, according to his/her profile, had his first win ever on Yahoo with this entry): 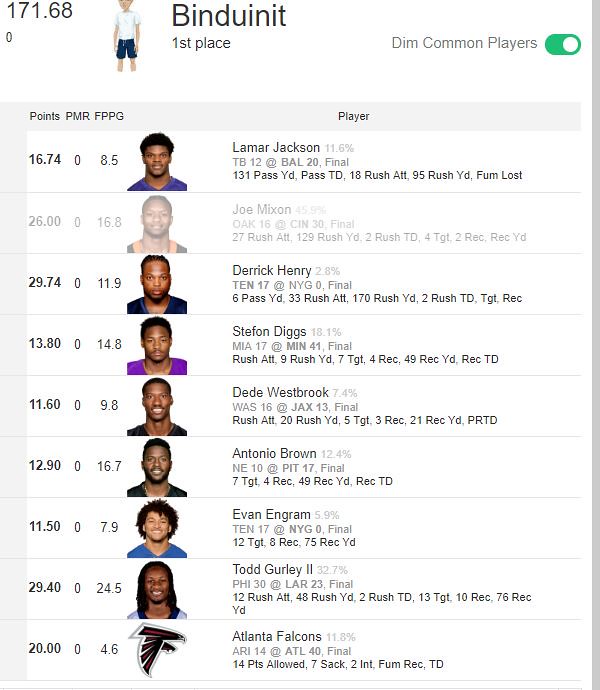 You couldn’t do much better than the Gurley-Mixon-Henry combo, especially with Henry just 2.8% owned. The WR-TE selections were all just good enough, so combined with the right chalk defense, it was plenty to take the down the tournament. It looks like, from a quick glance, you needed three of Gurley, Mixon, Henry, or Mack to place in the big money here. Also noticed a smart strategy here of, besides Brown, this was a Patriots/Steelers fade, which was also a must to score the big cash.

On to my blah lineups. 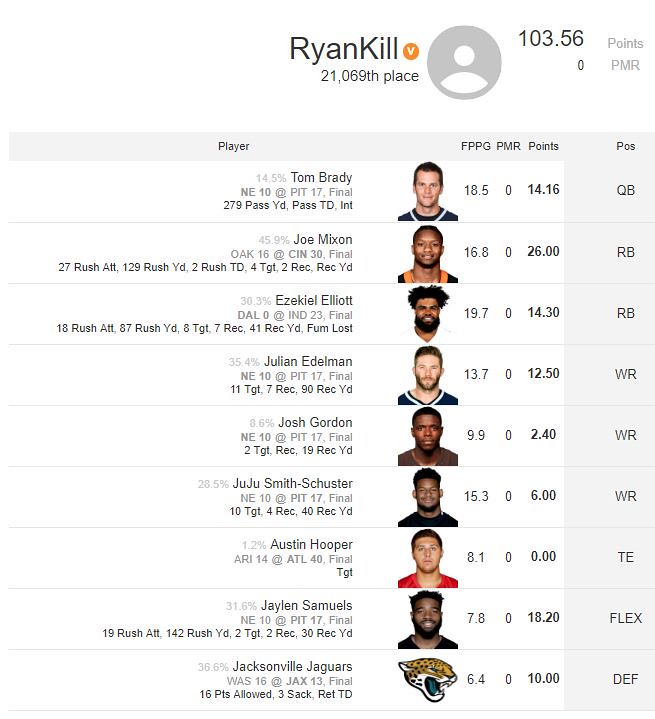 This was a bet on Brady and the Patriots offense getting right in an important game against Pittsburgh. That clearly didn’t happen so any lineup with any combination of multiple Patriots and Steelers was dead in the water. Hooper taking a zero didn’t help either. 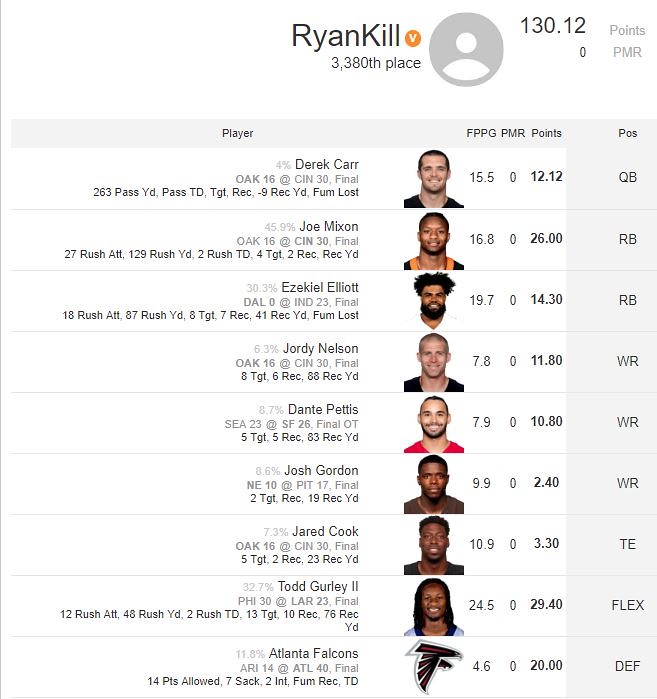 A game stack from Raiders/Bengals ended up being a marginal play if you were able to land on Nelson, Tyler Boyd and Joe Mixon, but anyone else from this game (with the second highest game total) was a let-down. This ended up being my highest-scoring entry, thanks to Elliott-Mixon-Gurley, but duds from Flash Gordon and Cook derailed a lineup that was 20 points away from big money. 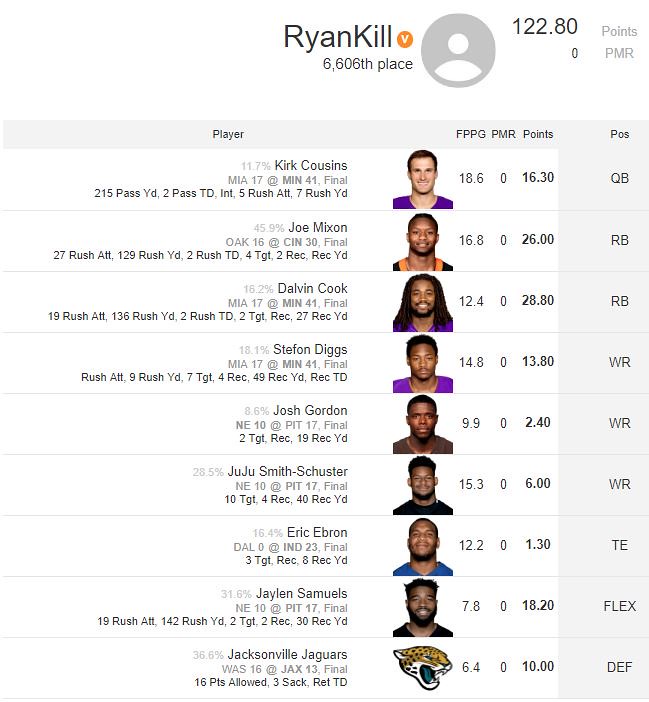 You could won some serious money yesterday with a Vikings stack similar to this one, adding in the Minnesota defense for good measure. Alas, the Gordon/Juju/Ebron combo bombed, and I am learning I was clearly too overweight on this game as I Monday-morning quarterback this thing. Also important to note as I look at these lineups is I was evenly distributed between Falcons and Jaguars yesterday. Several of my lineups would have place much higher if I had saved the two dollars and gone 100% Falcons. 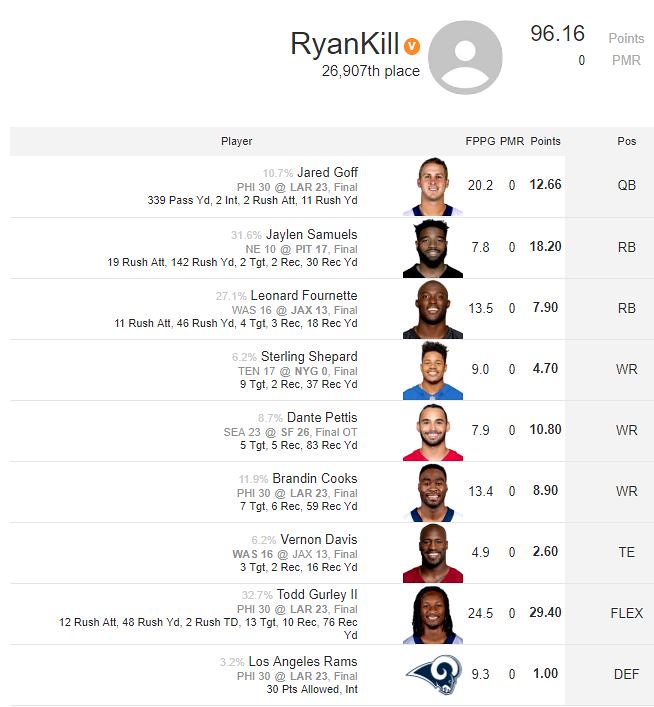 So much for a Rams stack. I was excited to be able to play this game on the Yahoo slate, but apart from Gurley, the Rams stomach-punched a lot of people in a lot of forms of fantasy yesterday. Fortunately, this was my only exposure to Goff and Rams wide receivers, as this ended up being my lowest-scoring lineup of the day. Fournette disappointed many owners yesterday after being an appealing tournament play. 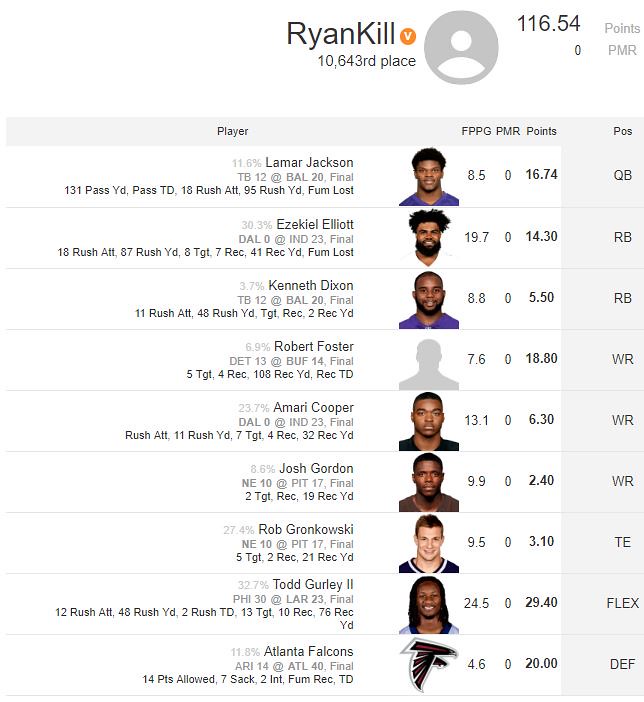 The story of my day yesterday was a lot of pieces right across my lineups, but could never combine all the right pieces into one entry. I wanted to monopolize the Baltimore rushing attack with this lineup, and in hindsight should have chosen Gus Edwards. Had I done that, this lineup would have cashed. Let me just to continue to thank the Patriots for their performance yesterday. I’m done trusting Brady. He just doesn’t have it anymore from what I can see. 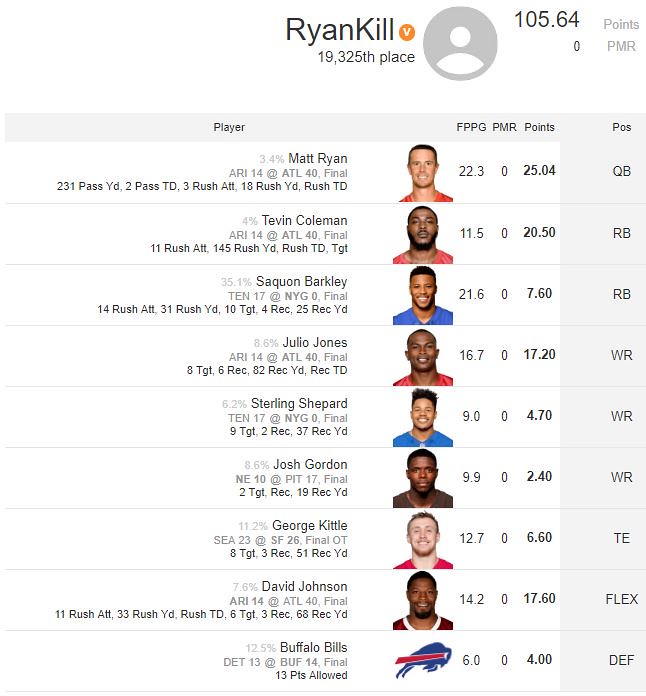 The skeleton of this lineup had so much promise. The Ryan-Coleman-Jones stack was popular but definitely smashed. I remember switching to the Buffalo defense on this one, but can’t for the life of me remember why I did that. That cost me 15 points and a cash in this line up. But the real reason this one failed was the decision to try and get Barkley into a lineup or two. Had I stuck with Elliott or Gurley – who I felt stronger about – this one had major potential. I learned a valuable lesson on the Gillcast this morning. They reflected on the bad decision to play two Giants in the same lineup. I did that here and it sunk me. Story of my day I guess… 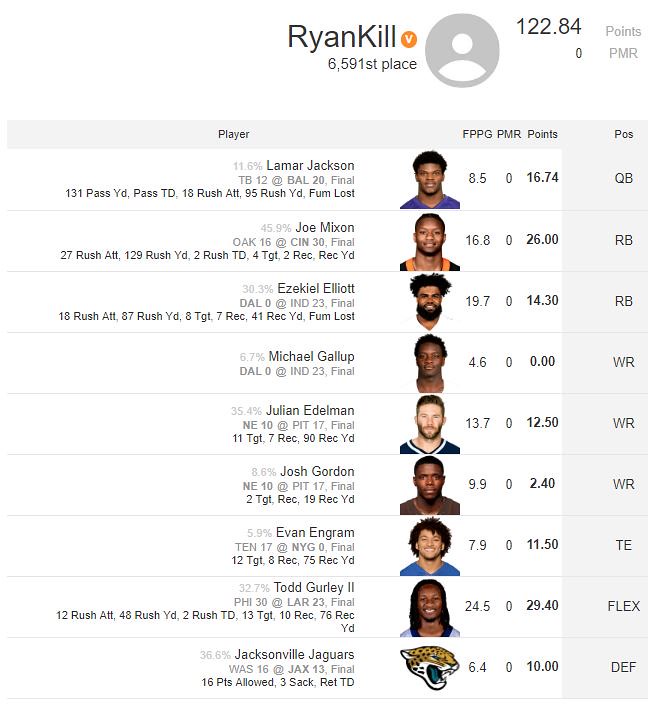 This was an attempt at jamming in all the stud running backs. It worked for the most part, and if I had any luck in my wide receivers here, would have profited handsomely. Engram ended up as one of the more valuable Tight Ends of the slate, and I wish I had more exposure to him and went more underweight on Ebron once the news came out that T.Y. Hilton would play. Another example where the Falcons defense would have doubled the winnings on this lineup. 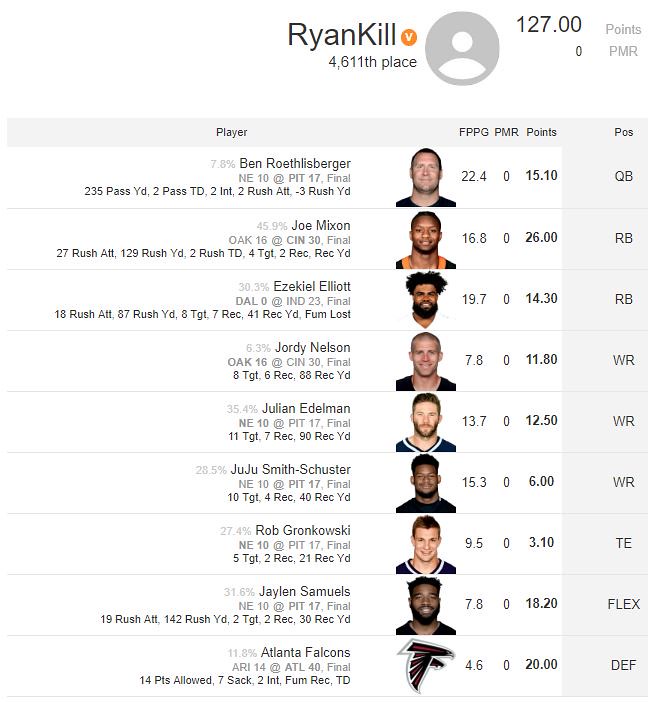 This Patriots/Steelers stack was somehow able to triple up (won $60 on the $20 entry), primarily because of good decisions at running back and defense. Should I do this tournament again, I will definitely spend more time on spreading out the exposure on wide receivers – seeing how volatile they are – and not going too overweight on any one game. After spotting Jordy Nelson on this one, I also recall debating between Nelson, Dante Pettis, and Robert Foster all at $12, and ended up with Nelson and Pettis in a couple spots. Landing on Foster might have changed the fortunes of some lineups but I am not intensely regretting that decision this morning. 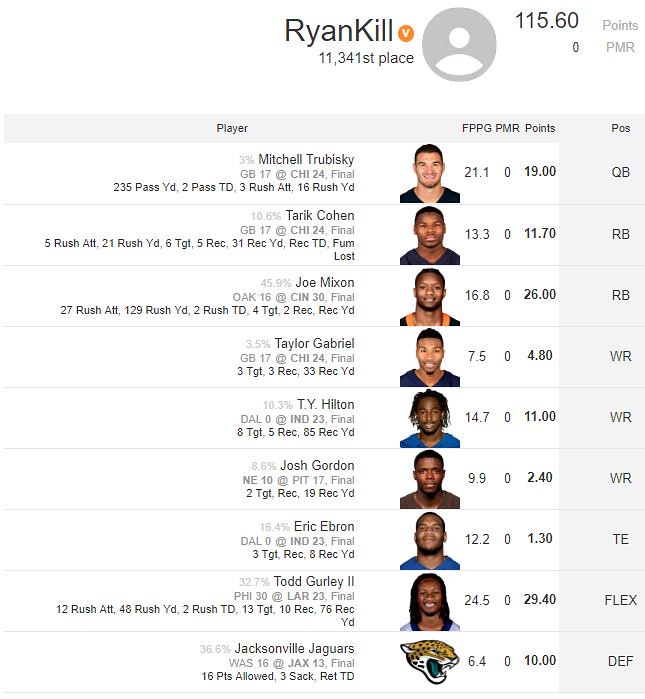 Here is the obligatory Bears stack with Trubisky-Cohen-Gabriel. These guys have won multiple people a million dollars this season, so at home against a lackluster Packers defense, it was worth a shot. Locked out of the cash line by Gordon and Ebron once again, I now realize I hate them. Not just dislike. Actual hate. 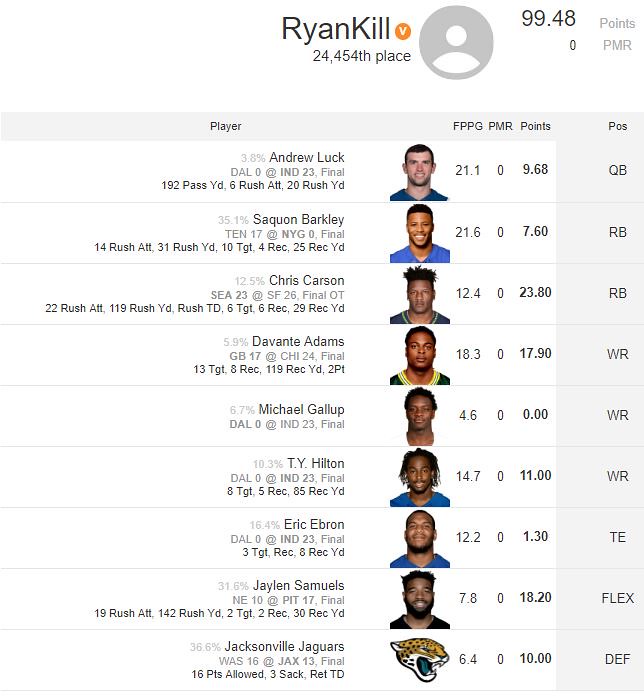 Here is the one lineup where I ended up on some strong tournament plays in Adams and Carson. The Colts stack didn’t work for anyone unless it was a Mack-Hilton-Defense play. Trying to get some exposure to Barkley again also destroyed any hope for this entry, as did the Michael Gallup dart throw, trying to wrap back around from the Colts stack.

Somehow, despite all the bad decisions and overweight exposure to the highest total game of the day (silly me, what was I thinking), I won $200 on my $200 entries. Breakeven could be a lot worse. And that just means I have the money ready to run it back this week in the same contest.

If you were in the contest, let me know in the comments how you did and a little about your process.