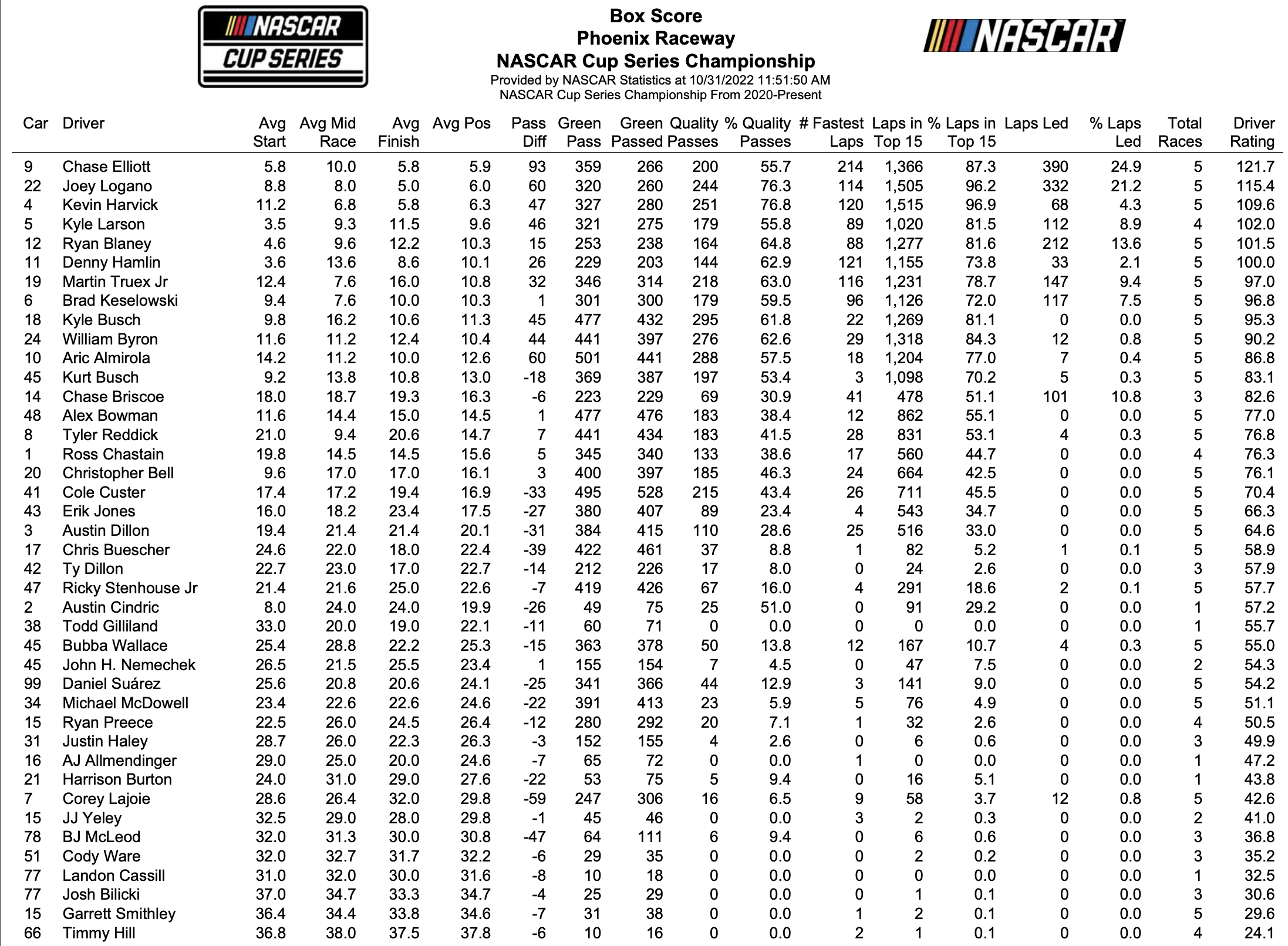 It’s always bittersweet to write the final article of the season, but it’s been a great year and thank you everyone for the support this season. I look forward to the 2023 season and having more data with the new car. This weekend we head to Phoenix for the NASCAR Cup Series Championship. The Truck race and XFINITY races were great, and I hope the Cup race on Sunday is great. This will be the ninth short flat track race of the season. I like to use New Hampshire and Richmond when comparing Phoenix. I’ll be looking at all flat-track data, those 4 flat track races, practice data, recent speed data, and a few other small things when building lineups this weekend. Like I mentioned on the live show, I’m worried with the new car, this race isn’t just the Championship 4 dominating the whole race. I think it opens different types of strategies when building lineups.

The stages are 60, 125, and 127, which is a total of 312 laps. NASCAR changed the stage lengths, and personally, I like the change to a shorter stage one. With 312 laps, we’re looking at 31.2 laps led points and 31.2 laps completed points on FanDuel. On DraftKings, we’re looking at 140.4 fastest lap points and 78 laps led points. With 218.4 potential dominator points, we’re looking for two to three dominators on most lineups this weekend. There have been at least two dominators in eight straight races here, and the pole sitter has been one of them in six of the last seven. Pricing on DraftKings is soft, so I think I’ll end up on more three dominator teams to make my lineups different. Some of the potential dominators have great place differential upside, which makes this a fun DFS lineup build race. The biggest thing for me, I want to focus on narrowing down my player pool in large field tournaments. 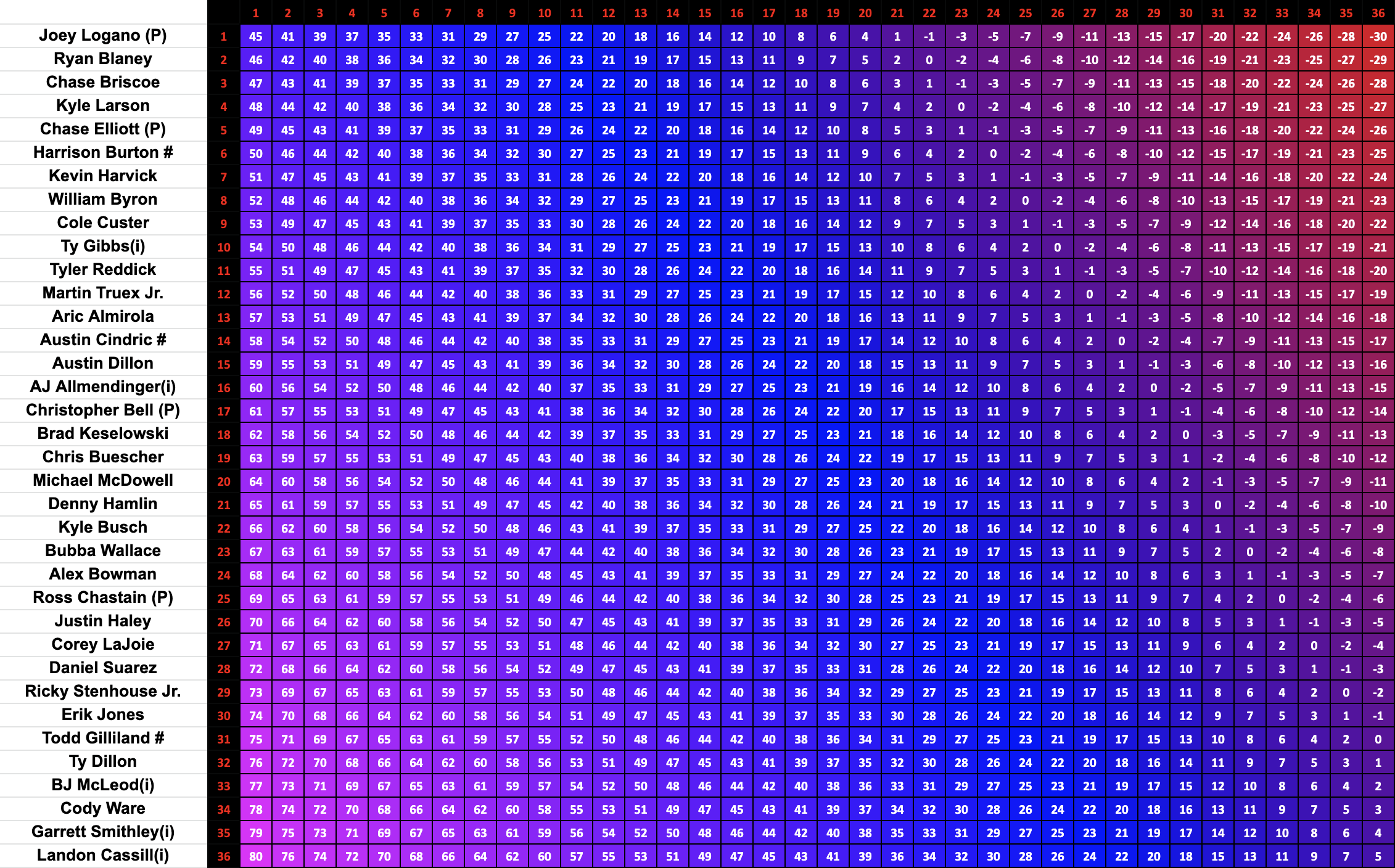 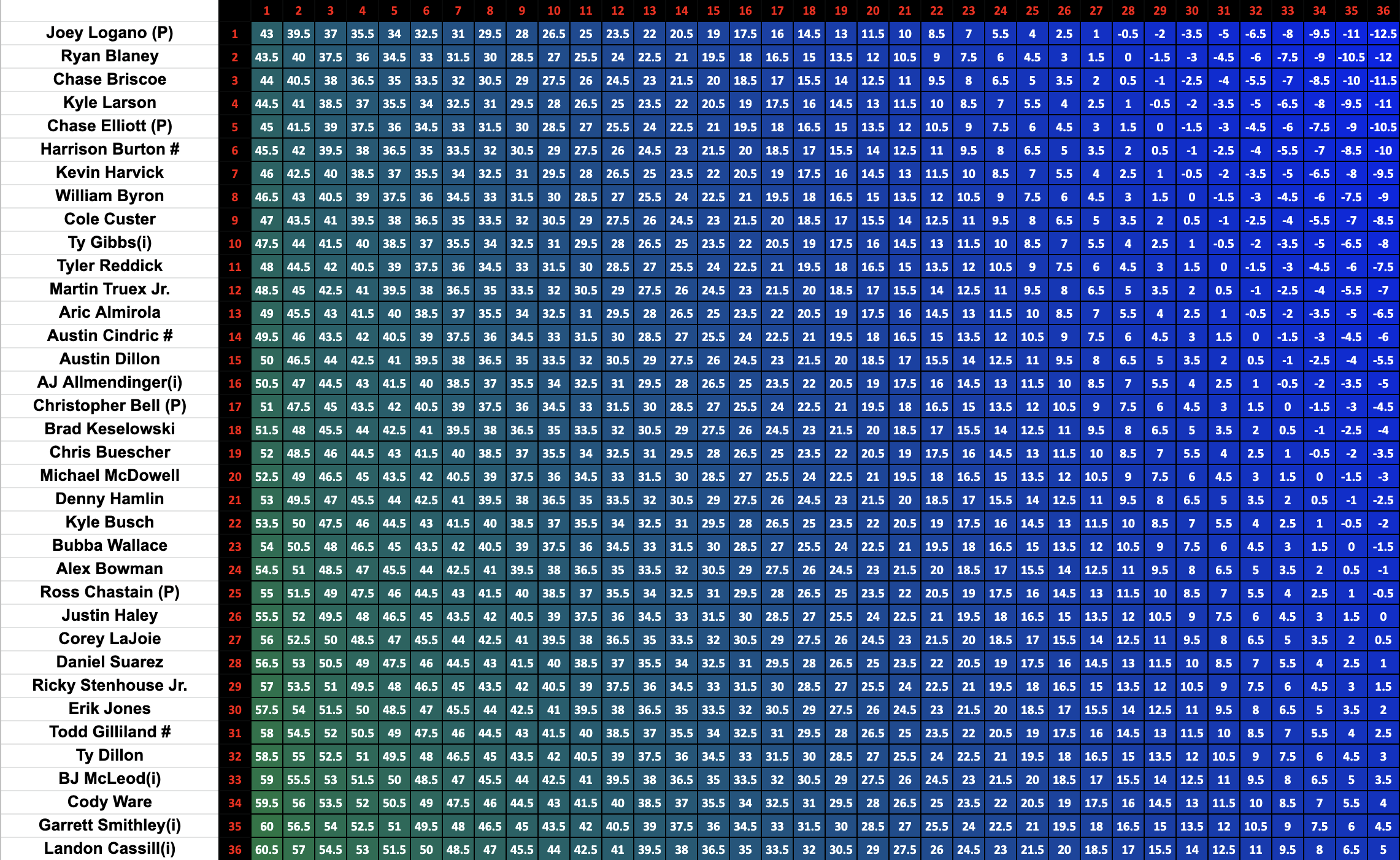 Joey Logano – Starting 1st – DK: $10,500 – FD: $12,500 – Logano starts on the pole, and like I mentioned above, the pole position has done well at Phoenix in recent history. Logano has averaged 63 laps led and 14.3 fastest laps in the four comp races. He has the fifth highest driver rating in those four races. His falloff in practice was great, but he didn’t have the early run speed like Blaney. With Blaney starting on the front row with Logano, I expect Blaney to play nice and Logano to get out to an early lead. With clean air and his falloff, I like his chances to dominate stage one at minimum.

Chase Elliott – Starting 5th – DK: $10,900 – FD: $14,000 – Elliott has been one of the strongest cars on flat tracks this season. He’s averaging the most fastest laps and laps led in the eight flat track races this season. Looking at the four comps, Elliott has the second-highest driver rating. Elliott had some of the best fall off and long run speed in practice, and I think he has a great chance to win this race. My model has him as the favorite to win the Championship. I’ll be overweight on Elliott in tournaments as well.

Bubba Wallace – Starting 23rd – DK: $7,300 – FD: $7,800 – Wallace struggled earlier in the season on these tracks, but he’s been a lot better here recently. Throughout his career, these flat tracks have been a strong point for Wallace. Wallace has four top ten finishes in his last eight races. I think he’s a strong mid-range place differential play. With pricing the way it is, I ended up in this price range a lot.

Ryan Blaney – Starting 2nd – DK: $9,100 – FD: $10,500 – Blaney had the best car in practice and was the best car here earlier this season. Despite getting a speeding penalty early in the race, Blaney still ended up leading over 100 laps. He had 52 fastest laps in that race. Blaney ran the most laps during practice, and still had the second-best overall lap average. He had the best 5, 10, 15, and 20 lap averages in practice as well. I don’t mind playing his with Logano, and I think you could use him as a pivot off Logano if you don’t think Logano will lead early.

Ross Chastain – Starting 25th – DK: $10,400 – FD: $13,000 – I’m going to set the over/under at 4.5 times we see the Chastain last lap move from Martinsville during the broadcast on Sunday. It was one of the coolest things I’ve ever seen in motorsports. Chastain struggled in qualifying, but he had top five speed in practice. He has a lot of short run speed, which could potentially help late in the race. I’m hoping we see Chastain finish top five and pick up 20 to 30 fastest laps on the way to that top five finish.

Kevin Harvick – Starting 7th – DK: $8,700 – FD: $11,000 – Phoenix Raceway is the house that Kevin Harvick built. He has nine career wins at this racetrack, and at one point, he won four straight races here. He had a lot of speed when we were here earlier this season but was stuck in traffic for a lot of the race. He had a much better qualifying effort this time around. Harvick has finished top ten in each of the four comps and has the best driver rating. I hope he goes overlooked because of price and I want to be overweight on him in tournaments.

Stevie gives an in-depth look on three cash game drivers, three tournament drivers, and two value plays. “I’m going to make sure it’s the best Fantasy NASCAR article in the industry” – Stevie. This article will be posted after qualifying each weekend.