I typically wouldn’t consider Tanner Roark on a 10-game slate, but given our limited options, I don’t think he’s the craziest SP2 option for tournaments. Here’s the bad news – the ballpark is awful for pitching, and he’s likely going to face four or five lefties, whom he’s had more issues with this season. Lefties have a .887 OPS against Roark this season compared to a .571 OPS against righties. Roark is going to have to find a way to navigate around Christian Yelich, Mike Moustakas, Yasmani Grandal, Eric Thames and Travis Shaw. I don’t see a reason to touch Roark in cash games as there’s just too much working against him here, but I don’t mind some darts on Roark in GPPs if making multiple lineups. Here’s the good news – the Brewers do own the 4th highest K% against right-handed pitching, and Roark himself has increased his K% to 22.9% this season (it was 19.2% last season). He’s doubled his slider usage from last season, which may be contributing to the increase in Ks.

Quick Breakdown: This isn’t a safe matchup at all, but at his price point, I will at least keep Roark in my GPP player pool in case I need a cheaper SP2 to make things work.

I would be lying to you if I told you who Jimmy Nelson is as a pitcher in the year 2019. I don’t think we really know at this point. Nelson continues to work his way back from a shoulder injury and has shown flashes of his pre-injury strikeout ability, but the results have been mixed. He’s struck out eight through his first seven innings, but he’s also walked six batters and hasn’t thrown more than 72 pitches in a game yet. In Triple-A, he struck out 29 batters over 24 innings, but walked 12 batters. It seems like Nelson continues to struggle with his command, and that’s going to get him into trouble. 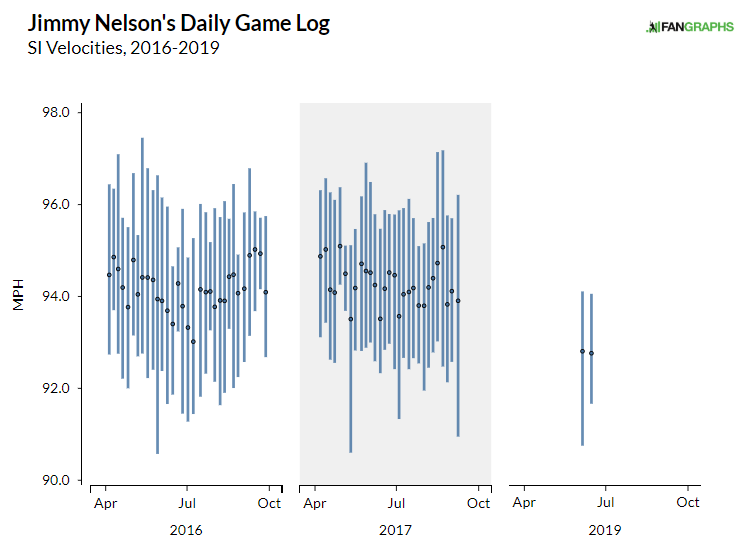 Also take a look at Nelson’s velocity. It’s way down, and that’s a concern for me considering his injury was shoulder-related. I have no idea if Nelson will be able to regain his pre-injury form, but for now I’m staying away.

Quick Breakdown: With Nelson’s velocity down and him continuing to struggle with walks, I’m not interested in him.

The Reds don’t have a high implied team total and they may go a bit overlooked on this slate. That’s fine for me as I really like them as a stack. As noted above, Nelson just hasn’t looked great this season. The Reds get to face him in a hitter-friendly ballpark, their prices are all affordable, and they should come at a fraction of what other teams like the Brewers and Cubs will come at. I’m not in love with anyone from a cash game perspective, but I will have some Reds stacks in tournaments today. With Nelson, I’m not so much focused on the handedness of the batter but moreso their lineup spot and power upside. Derek Dietrich, Eugenio Suarez, Jesse Winker and Yasiel Puig have the highest ISOs on this team against right-handed pitching, so these four would anchor my Reds stack. I would also be fine with exposure to Nick Senzel and Joey Votto in Reds stacks, but they fall slightly below the other four for me.

The Reds are probably my favorite sneaky stack on this slate, if they are even considered sneaky. It’s a good ballpark for power and the stack is affordable enough where you can still fit in some good pitching without breaking the bank. On DraftKings, for example, no player costs more than Nick Senzel at $4,600, while most hover in the $4K range.

If you’re playing the Brewers, it’s the lefties you want. Christian Yelich is in a prime spot here at home with the platoon advantage, but he’s just so expensive that I don’t see how you can get to him outside of Brewers stacks. It’s the lefties you want here, so load up on Yelich, Moustakas, Grandal, Thames and Shaw. From a cash game perspective, Shaw is incredibly cheap and a great way to spend up elsewhere.

Roark isn’t someone I generally like to pick on because he tends not to get blown up or allow many home runs. On the season, he’s allowed just four homers so far. Given the ballpark and elite lefty power I am fine with a Brewers stack. I’m not planning to go overboard with Milwaukee exposure, but the power upside keeps them on my tournament radar.