NFL DFS Picks and Analysis Week 3: The Grind Down - Falcons vs. Bears 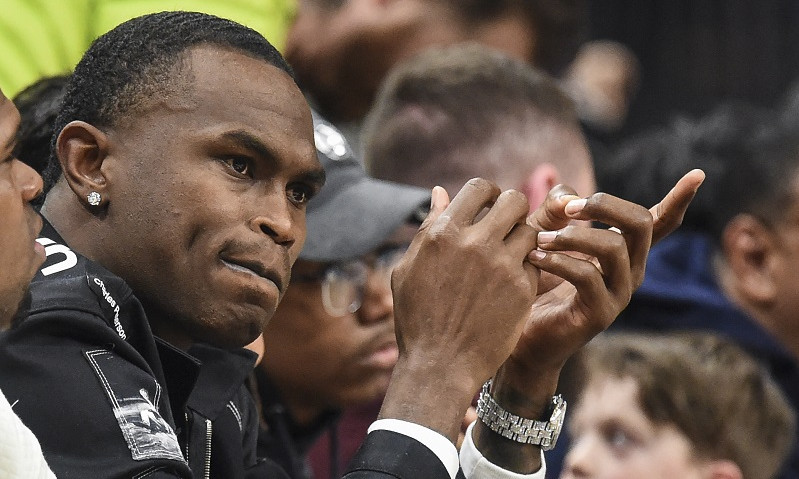 It’s been a classic case of good news, bad news for Todd Gurley. His workload has been encouraging in his first two starts with the Falcons — 35 carries and five targets. Unfortunately, he hasn’t been very effective with those opportunities. He has only racked up 118 yards from scrimmage with one touchdown. You couldn’t have asked for a better game script last week against the Cowboys, but Gurley wasn’t able to get much of anything going on the ground.

The Bears have been worse against the run than they have been against the pass this season, but the Falcons offensive line is slightly worse than the Bears defensive line in terms of adjusted line yards. Running backs that are home favorites and have a path for 20 touches always deserve consideration in DFS, but Gurley is a deep tournament flier at best this week. At the end of the day, DFS is all about options and the running back position is incredibly deep for the main slate.

Matt Ryan has scored at least 24 fantasy points in each of the first two weeks and they were completely opposite game scripts. The Falcons were playing catch-up in Week 1 against the Seahawks and they got out to a huge lead in Week 2 against the Cowboys (that they ultimately gave up). Ryan has historically been a great quarterback at home and he has plenty of weapons at his disposal in this offense. With little semblance of a run game, we could see Ryan airing it out 40+ times a game more often than not. Everyone seems to be writing off this Bears defense, but they are ranked fifth in DVOA against the pass in the first two weeks. The total for this game opened at 48 points and while the majority of the bets are on the over, it has dropped to 47.5 points. This isn’t extremely actionable information for DFS, but I found it interesting that the total is trending down when everyone is expecting a shootout.

Julio Jones labored through a hamstring injury against the Cowboys and has missed practice all week. He is shaping up to be a true game-time decision. While I wouldn’t look his way in cash games or single-entry contests, he’s an awfully enticing large-field tournament play. Everyone is selling their Julio shares in both DFS and season-long leagues. He’s off to a slow start this season, but if he didn’t drop that touchdown last week, the narrative might be completely different. It seems like there are a couple weeks each year when nobody plays Julio and he ends up breaking the slate. I have more faith in Julio having a breakout performance than I do in Russell Gage sustaining this type of volume. He’s the fourth option in this passing attack and has averaged 20 fantasy points in the first two weeks. I will let others chase that production.

I have Calvin Ridley being a top receiver in this offense. After what we saw last season and what we’ve seen in the first two weeks of this season, you can argue that he’s the 1A in this offense with Julio being the 1B. Ridley has caught 16-of-22 targets for 239 yards and four touchdowns in the first two weeks. While we can’t expect him to score two touchdowns every game, we can expect him to see double-digit targets. Hayden Hurst will continue to get better in this offense and he’s coming off of a nice week against the Cowboys where he caught 5-of-8 targets for 72 yards and a touchdown. If Jones ends up being active for this game, I will have interest in him, Ridley, and Hurst in tournaments. If Jones is ruled out, Ridley, Hurst, and Gage would all see an uptick in targets. 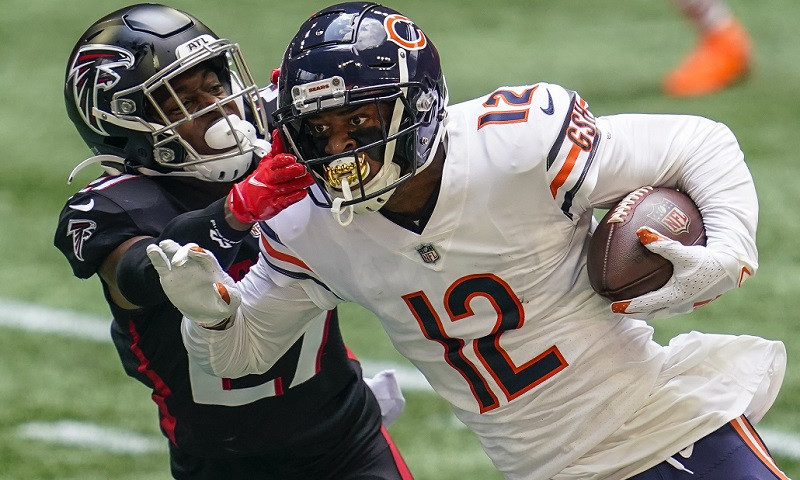 David Montgomery has looked good in the first two games of the season, which is an adjective we rarely used to describe his play last season. He has 29 carries and has averaged over five yards per attempt. We often think of him as a one-dimensional back, but he has seen three targets in each game and even caught a touchdown pass last week against the Giants. Tarik Cohen will continue to get most of the pass-down work, but it’s encouraging to see Montgomery make plays catching the ball out of the backfield.

At what should be sub-5% ownership, Montgomery is at least somewhat interesting in contests like the Millionaire Maker. Running back is loaded with options, but he’s playing indoors in a decent matchup against the Falcons. On the season, Atlanta is ranked 18th in DVOA against the run and 14th in defensive adjusted line yards. The main concern for Montgomery is the game script. If the Bears fall behind early, it will be nearly impossible for him to find a way to 20 touches.

I am not a Mitchell Trubisky truther by any means (are there any of those left?), but he does make his way into my DFS lineups on a regular basis. He’s always cheap, he has a decent rushing floor, and the Bears haven’t had much of a ground game over the last couple of years. His play is inconsistent, but he did throw for three touchdowns in the fourth quarter of Week 1’s matchup against the Lions. You can’t ask for a better matchup this week, as the Falcons are ranked 28th in DVOA against the pass and 21st in adjusted sack rate. The game is indoors, the game script could be favorable if the Bears fall behind early, and he’s easy to pair up with his top receiver in tournaments.

Allen Robinson has been unhappy with his contract situation, but the Bears have shut down all trade inquiries and continue to say they are going to sign him to a long-term deal. With that narrative in everyone’s mind and his struggles through the first two weeks, his ownership will be deflated heading into Week 3. This is a great opportunity to buy low, especially since the volume has been there. Robinson has nine targets in each of the first two games and has already racked up 239 air yards. Granted, air yards from Trubisky aren’t as valuable as they are from other quarterbacks in the league, but they should still signal positive regression. He has the squeaky wheel narrative in his favor and a dream matchup against cornerback Isaiah Oliver.

Anthony Miller continues to man the slot and finds himself in a favorable matchup as well. The Falcons haven’t been able to stop anyone in the passing game and again, the Bears are 3-point underdogs on the road. I have more interest in Robinson than I do in Miller, but don’t mind using both in my MME player pool. Darnell Mooney is quickly becoming the WR3 in this offense, but I will take a wait and see approach for now. The Bears are giving significant snaps at tight end to Jimmy Graham, Cole Kmet, and Demetrius Harris. I know the Falcons have struggled to contain tight ends and just gave up 23 fantasy points to Dalton Schultz, but I will take my chances elsewhere.