NFL DFS Picks and Analysis - Week 8: The Grind Down - Panthers vs. Falcons

NOTE: Games will be published as they are completed. Main slate writeups will be completed by Friday evening. 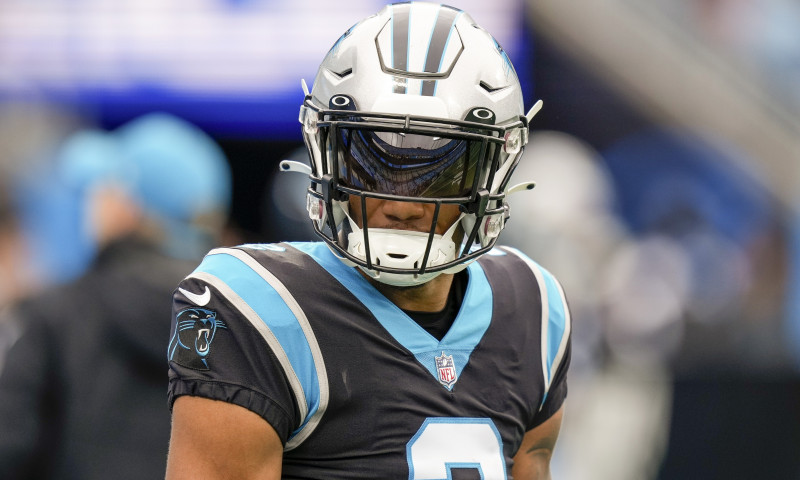 We’ve had a number of terrible Thursday night games over the years, but this should be a fun one. Christian McCaffrey was designated to return from IR, but was seen with a non-contact jersey in practice on Monday and Tuesday. Head coach Matt Rhule has yet to rule him out for this game and said that he was hopeful he could return to the lineup. However, I have a hard time seeing the Panthers risking their best player without getting in any reps in practice. For our purposes, let’s assume that C-Mac is going to be inactive this week. This is currently in line with our projections at RotoGrinders. If that changes, I will revisit the article and give my thoughts on the situation.

Mike Davis has essentially stepped right into the C-Mac role and has been one of the most productive running backs in football over the last month of play. He’s played on at least 72% of the snaps in each of the last five games, averaging 14 carries, 6 targets, and 19 fantasy points per contest during that stretch. While the Falcons have done a decent job at defending the run this season (seventh in DVOA and sixth in adjusted line yards), they have allowed the second most receptions, the sixth most receiving yards, and the most receiving touchdowns to running backs. In case you have been hiding under a rock, Davis is quite proficient at catching the ball out of the backfield. If McCaffrey is inactive for this game, Davis becomes my favorite play of the slate.

This is one of the few occasions where pairing a quarterback with his running back makes sense, even in tournaments. First of all, this is a showdown slate and we only have so many options to choose from. Additionally, Mike Davis is a big part of the passing game and the Falcons have been good against the run. And finally, stacking against Atlanta has been a profitable strategy the entire season. Teddy Bridgewater has played well in his first season with the Panthers, averaging 19 fantasy points per game with the 12th best DYAR (Defense-adjusted Yards Above Replacement) in the NFL. He should be licking his chops for a matchup against the Falcons, who are ranked 31st in DVOA against the pass, 30th in adjusted sack rate, and 31st in fantasy points allowed to quarterbacks this season.

At the start of the season, we expected Robby Anderson to be the deep threat and D.J. Moore to be the consistent option over the middle of the field. While Moore has been heavily involved in the offense, Anderson has more targets, receptions, and receiving yards this season. As it turns out, the Panthers are using Moore as more of the deep threat. He has more air yards (669) than Anderson (624) and a significantly higher aDOT (12.6). That has changed a little over the last two weeks, so it’s something to keep an eye on moving forward. Regardless, both receivers are incredibly talented and have possibly the best matchup of the week. The Falcons have allowed the fifth most fantasy points to wide receivers and we have both Anderson and Moore projected for a target share over 26%.

Even though I don’t have a ton of interest in the ancillary pieces for the Panthers, there are always a couple random names that end up being difference-makers in showdown slates. At the very least, we should cover the other options. Curtis Samuel has not lived up to his ADP in season-long leagues, but he’s had a steady role with McCaffrey out of the lineup. Over the last four games, Samuel has averaged just under five targets and three carries per contest. Ian Thomas was last seen on the side of a milk carton, but it’s worth noting that the Falcons have allowed the most fantasy points per game to tight ends this season. If he somehow finds his way into the endzone, he should be able to pay off his cheap salary. 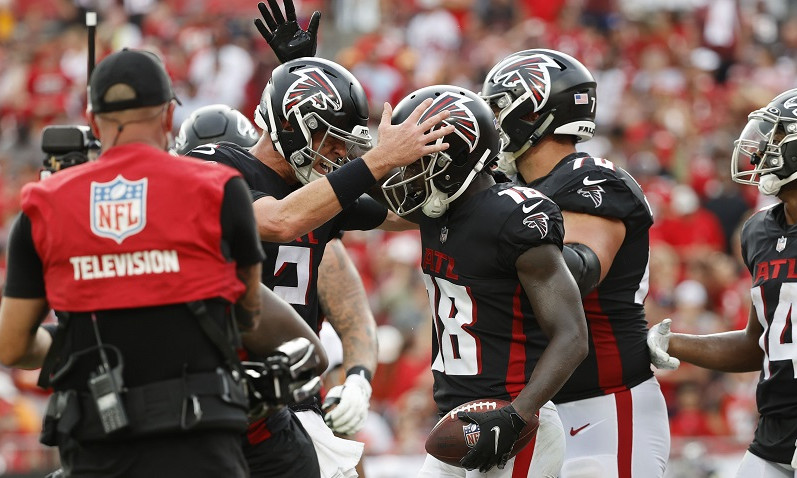 Todd Gurley isn’t as explosive as he was in his first few NFL seasons, but we are more concerned about opportunity than talent when it comes to the running back position in DFS. He has played a progressively higher snap rate each of the last five games, highlighted by a 71% snap share in Week 7. Earlier in the season, we were worried about his pass game involvement, but he’s had 12 targets over the last three games. On top of that, he’s had 43 carries over the last two weeks and he has averaged the third most redzone opportunities of any running back on the schedule this week.

We have no reason to be concerned about Gurley’s volume, so now let’s take a look at his matchup. On the season, the Panthers are ranked 28th in DVOA against the run and 31st in fantasy points allowed to running backs. Atlanta’s offensive line hasn’t been the best run blocking unit in football, but they have slightly better adjusted line yards than Carolina’s defensive line. Gurley’s productivity is far from ideal (28th out of 31 graded running backs in Football Outsiders’ DYAR), but he’s a good bet to have 20 touches in a pristine matchup. Brian Hill is a reasonable point-per-dollar value on DraftKings ($2,200), but he likely lacks the upside needed to find himself on the optimal lineup in what should be a high-scoring game.

We’ve talked about the home/road splits for Matt Ryan for years, but playing away from home hasn’t been an issue this season. In three road games, he has averaged 25 fantasy points per contest. We can also look at his splits with Julio Jones in and out of the lineup. In the two games Jones has missed, Ryan has averaged 10 fantasy points. In the five games Jones has played, Ryan has averaged 25 fantasy points. Regardless, this is a showdown slate and quarterbacks are almost always viable in these situations. On top of that, he draws an exploitable matchup against the Panthers, who are ranked 17th in DVOA against the pass and 29th in adjusted sack rate. With so many weapons at his disposal, Ryan is one of the safest fantasy options in this game.

Julio Jones has no idea of his ownership in DFS each week (at least not to my knowledge), but he tends to have his best fantasy outings when he’s low owned. That won’t be the case for this showdown slate, but we shouldn’t be concerned. He’s coming off of two solid outings (8/137/2 against the Vikings and 8/97 against the Lions) and projects to run a significant number of his routes against Donte Jackson. Calvin Ridley provides a nice pivot off of Jones, as the two rarely have big fantasy outings in the same game. For whatever reason, Ryan likes to lock on a receiver each week and pepper them with targets. Ridley has a similar target projection and should be lower owned than Jones given the fact that he’s $400 more expensive on DraftKings and $1,000 more expensive on FanDuel. For what it’s worth, Ridley is projected to have the better cornerback matchup (Troy Pride).

Russell Gage is no longer listed on the injury report, but the Falcons limited his reps in Week 7. He only played on 32% of the snaps against the Lions, but it didn’t limit his productiveness in the box score (6/54). I expect Gage to have a bigger role this week, but we could still see a decent number of snaps for Brandon Powell. He has maxed out at 5.4 fantasy points this season and has only caught a pass in two games, but he’ll only need one reception to pay off his $200 salary on DraftKings. Olamide Zaccheaus will see a few snaps himself, but he’s a deep tournament dart at this point. Hayden Hurst hasn’t had a breakout season in his first year with the Falcons, but he’s topped 12 fantasy points (DK scoring) in three of seven games. He’s capable of having a big game and could end up garnering lower ownership than Jones and Ridley.