Betting Quick Take: Unfortunately for DFS GPP players, I think the under is the better bet here despite the great situation that appears on paper. Tampa Bay’s defense overall is probably underrated, and has mostly been shredded by offenses I consider capable. Arizona is also capable, but I fear they could find themselves on defense a lot more than they are on offense. Should Tampa Bay control this game and keep things in at least a neutral scoring deficit, they tend to possess the ball for long periods and run a slower pace. The number of outcomes in the range of under are greater than the number of overs in my mind, and I’d prefer to lean that direction. I still think it’s a fine game for DFS, and I’m not that confident in this selection.

For what it’s worth – there is a big gap between ticket count (less than 40%) and percentage of money (more than 50%) on the under.

Injuries to Monitor: For Arizona, Chase Edmonds appears to be on track to miss this game, but David Johnson says he is “100%.” He has two full practices that support that assertion already. On defense, CB Tramaine Brock (slot) is questionable after starting the week DNP>DNP. If he can’t go, it would be an upgrade that Chris Godwin does not need in already strong matchup.

Tampa Bay should see O.J. Howard return on offense, which is a small bump to their passing game in what has been the best possible matchup in 2019. On defense, Carlton Davis was downgraded to DNP Wednesday, which hurts his chances of returning. His replacement Jamel Dean was absolutely torched by the Seahawks last week for over 150 yards and 3 scores. That’s good news for the Arizona passing game if Davis can’t go.

Other News and Notes: In case you missed it, Ronald Jones is now the “starter” for Tampa Bay.

Expected Game Pace and Tempo: Tampa Bay is an uptempo team that gets off a lot of plays. They rank 9th in total pace at the line and 3rd in plays per game. They often find themselves in shootouts due to lack of efficient defense but rank 7th in total time of possession and tend to play much better on offense. The Cardinals are the 3rd worst defense on a yards per play basis, and this game figures to be another hallmark example of the Buccaneers style. Expect them to be business as usual with upper end play volume and the offensive production that follows.

Arizona is second in total pace at the line but has been inefficient on offense. They rank just 18th in yards per play. Facing the pass funnel Buccaneers defense, I would expect their tempo to remain but their efficiency to improve. That would be good news for fantasy production. You have to like this game on paper.

Tampa Bay is a -5.5 favorite at home, which suggests there could be negative script for Arizona. That’s a minor downgrade for the game if we see more Ronald Jones and less Jameis Winston airing it out. If you’re thinking of game stacks, also consider a bet on Arizona. In my mind, they are one and the same: a shootout here is much more likely if we see Arizona close or leading. 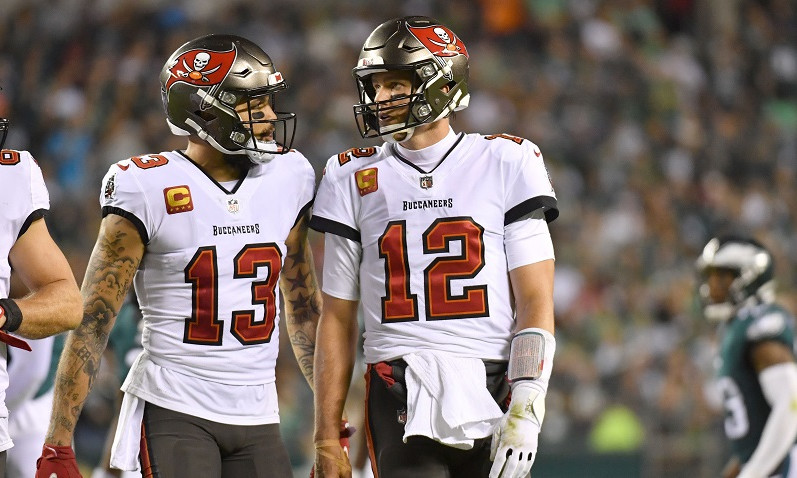 Opportunity is coming for Ronald Jones, and he has been declared the lead back by the Buccaneers. Last week, we saw him take the bulk of the rush attempts and find the end zone. His efficiency was average and his passing game work still limited. In fact, Tampa Bay as a team is very limited in their ability to get efficient work from the RB. They rank 5th from the bottom in RB touches per game and dead last in RB touch yards. The bust potential from someone like Jones is reasonably high if game script goes awry or he fails to find the end zone. That said, his price points on DFS sites coupled with the need for value running backs in Week 10 keep him in the conversation. In my mind, he’s a GPP secondary play who will carry ownership so he’s not my personal favorite. I do understand there is upside for him at these prices and in a potentially high scoring contest. I don’t mind if you wanted to call him something on the high end of secondary and closer to optimal. For me though, the lack of passing game work makes it hard for him to have a true smash game as often as his ownership suggests he will need to. I expect him to be owned in double digits.

Jameis Winston finds himself in a very strong position in Week 10, facing a weak secondary and wielding the power of tremendous mismatches at various locations on the field. We often prefer Winston in trailing situations or close games, something we are not guaranteed to get with the Bucs checking in just short of TD home favorite status. However, the individual spots for his WRs are so nice that you have to imagine they will enjoy passing game efficiency. Projections favor him as an optimal level QB this week, and I am inclined to agree. He’s a strong option on every site Week 10.

Mike Evans could see Patrick Peterson in coverage, and maybe that’s an issue. I wouldn’t overthink that though, and just play him if you want to stack this game. I don’t think you’ll be getting to Evans in your cash games, and thus he’s going to be a nice secondary stacking option in GPPs. There is another high priced WR elsewhere you’ll be using in cash, and it’s not that I don’t think Evans has a chance at another big game. His recent level of volume is incredible, but you have to wonder how long it can stay this skewed between him and the uber-talented Chris Godwin.

Speaking of Godwin, he’ll be lined up slot against a player he is for sure better than… no matter if it’s Tramaine Brock or anybody else the Cardinals have to offer. This is good news for a player who should see his ownership lower than his teammate Evans after recent performances. Godwin is still an upper-crust level talent facing a defense that struggles to defend the WR position and ranks poorly in high level passing game indicators like DVOA. Notorious has labeled him a core play for Week 10, and I think that is absolutely fair. He’s an optimal play for GPPs, though I don’t think you’ll find your way onto him in cash games if you’re paying for @Cantguardmike.

O.J. Howard will be returning from injury this week and is priced like he gets 8% of the targets ever week. Unfortunately, the reason for that is because he gets 8% of the targets every week. The O.J. Howard we loved in 2018 played out of the slot and was a featured player in the passing game. In this offense, he has been far from that. Arizona has the benefit of offering him the chance at efficiency. Even when adjusted for schedule, they still allow the most fantasy production to the TE position. I’m willing to call him a leverage play based on price and expected ownership, but he is no lock to even catch one pass.

Team Quick Summary: This is a great spot for the offense and I endorse the entire starting lineup in game stacks. I favor Chris Godwin and Jameis Winston among the group. 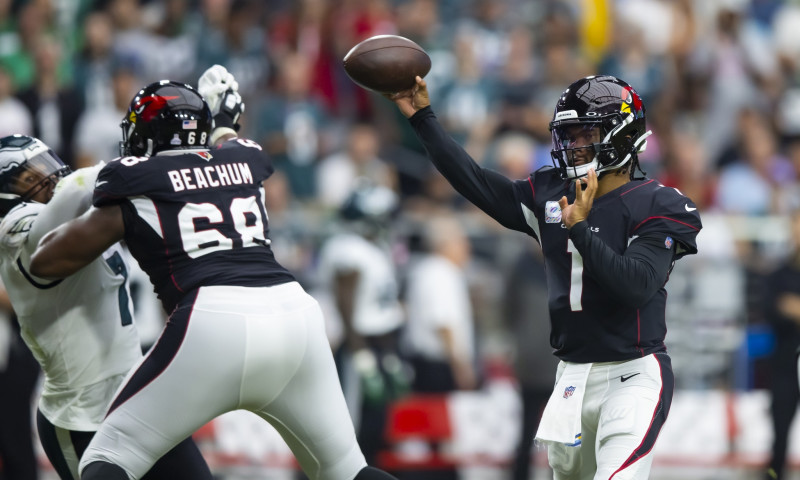 It’s a brutal matchup for Kenyan Drake and David Johnson. Tampa Bay locked down even the great Christian McCaffrey this season, and it’s a disappointing situation when considering the price point on a returning David Johnson. He is way too cheap even for his modest projected workload of 50% rushing. Drake is a much tougher projection after a strong debut, but somewhere between 25 and 35% of carries sounds right. Arizona has been grading out well in terms of run game efficiency lately, but I would hesitate to say they can keep it at that level given the opponent. I think this boils down to how creative you think Arizona can be sustaining Johnson’s passing game role. If he reaches his 13-14% target share projection, he’s close to an optimal play Week 10. If he falls short, he’s just a secondary play. I won’t overrate matchup in this spot and suggest he is in the high end leverage play conversation for Week 10 based on projections. Drake is on the shelf for me until I can see what his role is. He’s at best a secondary play but I won’t be using him.

Tampa Bay is normally pretty good at making teams one dimensional, but best of luck to you turning Kyler Murray into a one dimensional player. He owns 26% of the team’s rushing share this season and faces a team that has not exactly faced a murderer’s row of rushing QBs: Garropolo, Kyle Allen twice, Goff, Bridgewater, Tannehill, Jones, and Wilson. Some of those guys can move, but not like Kyler. We don’t know how good they are at limiting QB rushing, so we assume the median which is good for Kyler.

As it stands, making a team throw it against this pass defense is far from a profitable strategy for the 2-7 Buccaneers. They got crushed by Tyler Lockett last week, and are a threat to allow a huge QB performance any time they take the field. Murray is absolutely on the leverage play map this week, and should be held in high regard. On Yahoo, he is perhaps the optimal play at just $28. Winston is the only reason I would stop short of that, but he’s best rated for me on that site.

Christian Kirk will be Week 10 chalk thanks to a generous matchup, bankable target share, a long week of rest, low price points, and high level breakout talent. Teams have sizzled against this secondary in 2019, as they have allowed almost 2400 yards through the air. That makes them a top five raw yardage spot and contributes to their #1 adjusted fantasy points allowed ranking to the WR position. Kirk’s team leading share of air yards is only icing on the cake here, as the Buccaneers don’t limit opportunity well at any level of their secondary. Christian Kirk is an optimal Week 10 play.

Sadly, Larry Fitzgerald is just a secondary dart throw in this otherwise amazing spot. I grant you the matchups vs. SF and NO were on the tougher side, but not having big performances against NYG, ATL, and CIN the weeks prior are more concerning. He’s ridiculously cheap on FD and Y, and still affordable everywhere else. For me, that makes him a secondary game stack option but nothing more. It’s hard to trust a player with 13% seasonal air yards share and just 18% targets (which has been on the decline lately).