Betting Quick Take: Give me the Bills -2 here based on defensive advantage. Barkley can do some damage, but the lack of weaponry in the passing game should make it easy for the Bills to keep a lid on things and force Eli to operate long, sustained drives. The Bills defense is a favorite in that battle in my opinion. Bottom line: I think Buffalo can be effective enough with their offensive tools to score points, but I struggle envisioning the Giants doing the same. Buffalo -2. Confidence Level: 7 out of 10

Injuries to Monitor: The Giants could be in a critical situation with regards to their available wideouts. Sterling Shepard did not practice Thursday and remains in the concussion protocol. Golden Tate is suspended. And now we see Cody Latimer has popped up with a calf injury.

WR Cody Latimer also working on the side with a trainer on Thursday. Didn’t see him do more than jog. Giants getting really thin on healthy WRs. Makes even more sense why they signed T.J. Jones.

Bennie Fowler, Russell Shepard and Jones could all be seeing increased roles. pic.twitter.com/YpdamvGpVZ

The Bills aren’t fully healthy either, with Cole Beasley missing Thursday’s practice with an illness. For now I expect him to play. DB Taron Johnson could continue to miss, which may not be needed given the state of the Giants WR corps. Kroft still isn’t full go, so I would expect more Tommy Sweeney snaps until he’s ready to roll.

Expected Game Pace and Tempo: Buffalo is a lower end team in terms of total plays executed and pace of play. They won’t often get involved in high play volume shootouts, but for various other reasons can still create fantasy friendly environments. Namely: via turnovers for their opponents. The Giants don’t make a good fit for that outcome, as their defense is not highly touted and got smoked by Dallas a week ago. On offense, the Giants will run at a fast pace only when trailing. Otherwise, they are slow. Perhaps we’ll see them trail this week, but the Bills defense is stout enough that I don’t suspect they’ll be hyper effective at any point in the game. Translation: It would be a surprise if the total plays run in this game deviated very far from average either way. The Bills should run more plays than the Giants. 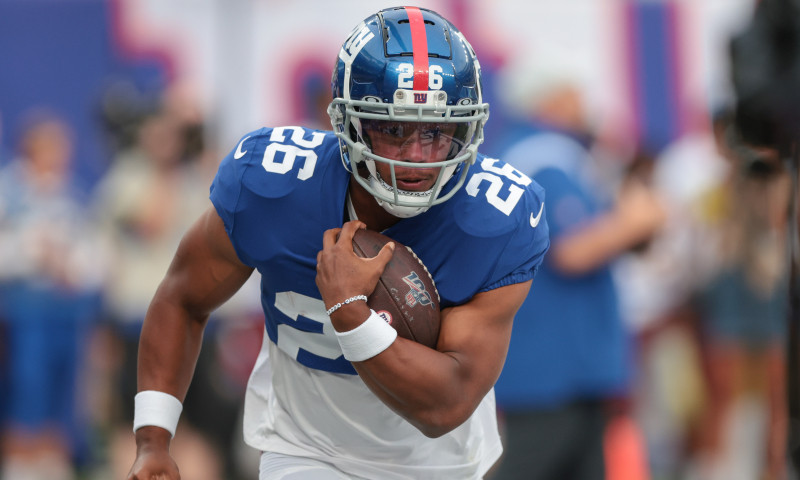 The one soft spot on the Buffalo defense from both a raw and schedule adjusted fpts standpoint was the RB going back to 2018. Le’Veon Bell didn’t exactly have a field day last week, but this is nothing but a mid tier defense in that department. The Bills look like a nice matchup for a player who should get elite opportunity.

At his current workhorse projection Barkley looks like a player that demands our consideration in GPP. If you consider that they might not have any choice but to use him in the passing game more, then I would nudge him up slightly higher. While his ceiling does look nice, this is still a team that could struggle to move the ball. The mere presence of opportunity does not guarantee slate winning efficiency.

The bottom line: We want to attach ourselves to monster workloads, and Barkley will certainly have that in Week 2. Cash games may not be the perfect fit for his price, but his mega-ceiling can bring fortunes in tournaments on the right day.

We still have questionable WRs Shepard and Latimer in the projections above, and this was going to be a tough matchup even if they were healthy. The fact that they could miss the game brings up all kinds of potential scenarios. The most likely scenario is that the targets get replaced by Russell Shepard, Cody Core, and T.J. Jones. That is a who’s who of who cares. That is a group of guys who will arrive at the stadium in a clown car, and be given multi-colored giant clown sized cleats when they arrive. It’s a certified clown show here in New York if Sterling Shepard and Latimer miss.

So we’re not using Eli – and we were never going to anyway. Why? Well, because he is the lead clown in the clown show. He gets a new pair of clown sized cleats every year for Christmas, so he just brings his to the stadium. Don’t use Eli.

We might be able to trust Evan Engram, who figures to be a focus of the offense even more so than usual. We originally projected him for 21% of targets, and it’s hard to expect a ton more than that on a median basis. That said, there is room for a big ceiling without any major players around him. You can easily consider him with this kind of projection, especially at a TE position that will see condensed ownership up top. He’s a fine GPP play as a pivot from those clear top plays.

Team Quick Summary: You can play Barkley and Engram in GPPs, but it will be a struggle to convince me to roster anyone else. 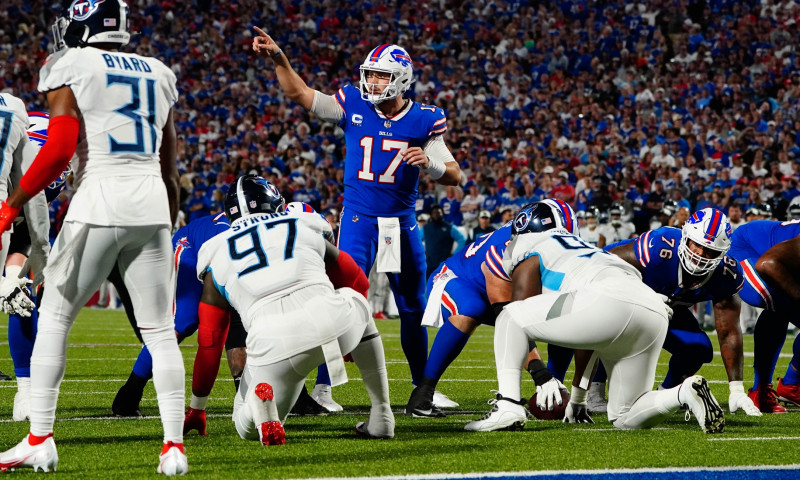 I’m here to take my L. I was adamant that Singletary was a poor athletic tester who would a) not have a big role with Buffalo year 1 and b) may not have the skills to produce at the next level. I’m changing my tune after one game, as premature as that may seem.

I don’t know if this this a hot take, but I really think this is a spot where Singletary could emerge. The Giants defense has been friendly to RB fantasy point scoring dating back to 2018, and it seems clear the Bills are going to put him on the field and find ways to leverage his skills. The elusiveness is really what has stood out in camp, the preseason, and Week 1 to the point where I want to quickly change my mind on his short term outlook. At 4.2k on DraftKings and $9.5k on FantasyDraft, I can envision some roster builds where he might be acceptable for GPP (paying up at WR or the other backs). I don’t think the ceiling is massive, so we’re really talking about a “glue” piece that allows you to string together some combination of options that can really smash.

I once believed it was fluky that Josh Allen generated so much production rushing, but at this point we can no longer have that conversation. The guy is willing to take off and surprisingly productive when he does. That actually does offer some semblance of a floor, but efficiency is the hallmark of a great fantasy QB. Allen is absolutely not that so far in his career. Perhaps the potential for clean pockets will help him, as the Giants allowed plenty of them for Dak Prescott last week (81%). That could allow for plenty of time to find some of his targets deep downfield, and connect on the splash plays that would ultimately propel him to GPP success. Allen is a strong value play at QB this week, but I have hard time committing to him as somebody you can call optimal. There are other more trust worthy floors on this slate that can be considered for cash games, but in GPPs he can easily be placed in the player pool against a vulnerable Giants defense.

John Brown stepped into this offense Week 1 right where he left off in preseason: as the clear top receiving option for the Bills. While Cole Beasley has shown chemistry with Allen, the real DFS value lies in Browns high air yards share and TD equity. Beasley will compete in terms of raw targets, but can’t compete on those ever important stats that will make or break DFS tournament lineups. Brown’s median projection is never going to look earth shattering on a Bills team that plays slow and has a high projected share of rushing attempts. That being said, we only care about his ceiling…and Brown is one of the rare few who can deliver multiple spiked weeks per season way beyond his price. He has a rather elevated price this week, but that should keep his ownership low. He’s a great stacking option with Josh Allen.

Team Quick Summary: Devin Singletary, Josh Allen, and John Brown are all in the GPP conversation this week.