Betting Quick Take: I’m not touching the spread unless it gets under seven points. If it was KC -6 or KC -6 1/2, I’d bite on the Chiefs. As it stands now, it’s a pass. I do like the under in this game, though, as I expect the Chiefs to sputter a bit offensively without Tyreek Hill, and Oakland’s offense isn’t likely to be a juggernaut with no clear WR1.

Injuries to Monitor: The Chiefs are already a little banged up, as Tyreek Hill will miss 4 to 6 weeks, while Patrick Mahomes rolled an ankle in the opener. He finished the game but was clearly hobbled a bit by the injury. He should be fine moving forward, but it’s worth keeping an eye on. The Raiders don’t have much to note from a skill player perspective, but they lost starting safety Johnathan Abram for the year with a torn labrum. That’s a massive blow with the high powered Chiefs on the schedule.

Other News and Notes: Oakland played with emotional fervor in Week 1 after the release of Antonio Brown, but that emotion is likely to wear off. They are on a short week playing a very good divisional opponent, and that’s a tall order.

Expected Game Pace and Tempo: The Chiefs ranked 20th in tempo in Week 1, while the Raiders ranked second from the bottom — ahead of only the Vikings. Expect a bit of a plodding game here, and I think the Raiders will try to chew clock in an attempt to shorten the game. I think the current Vegas total of 52 is two to three points too high. 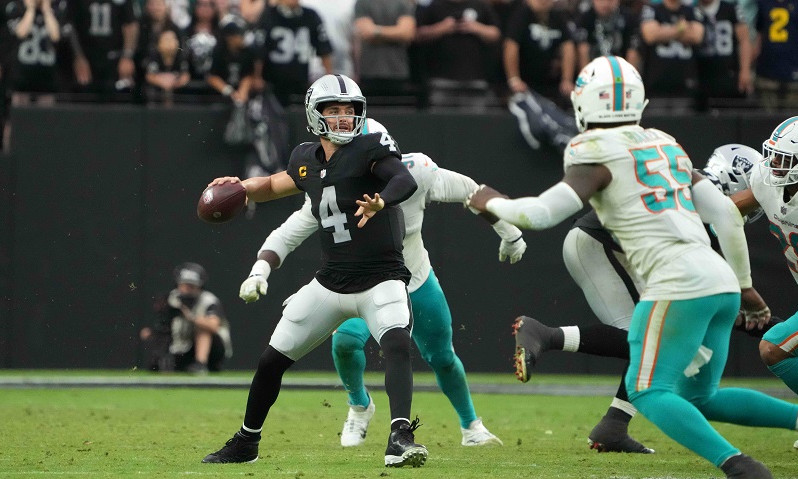 Rushing Opportunity Metrics of Note: Oakland is likely to be a run-first team this year, and they called the fourth highest percentage of rushing plays in the opening week. The Chiefs have also been a fantasy-friendly defense over the last few years, allowing the fourth most fantasy points to opposing running backs.

Rushing Efficiency Metrics of Note: Kansas City allowed a 19% explosive rush percentage against the Jaguars in the opener, and they do not have a defense that is built to stop bruising running backs. As an offense, the Raiders are merely average here; don’t expect Jacobs and company to be that explosive on individual plays.

Although I expect the Raiders to fall behind in this game, I expect them to attempt to establish the run early and often. Jon Gruden has not been shy about calling Josh Jacobs his RB1, and the usage in Week 1 proved that notion. Jacobs played on three quarters of the team’s offensive snaps, touching the ball 24 times in the process.

Simply put, this might be the last week we are able to get a discount on Josh Jacobs in DFS. Due to the Raiders playing the late Monday night game in Week 1, Jacobs is still listed at a similar price in Week 2. As I just mentioned, he dominated the Oakland backfield, earning 23 carries compared to just three combined for Washington and Richard. He turned those into 85 yards and a pair of scores, and he added a 28 yard reception. He’s one of the only true three down backs in the NFL these days, and he’s dirt cheap in DFS. Continue to target him with confidence in any format. Our early projections have him as a top five PT/$ RB on all the primary DFS sites this week. I agree with that sentiment. This is his backfield.

Passing Game Opportunity Metrics of Note: If game flow provides the Raiders with a deficit, there will be more opportunity for Derek Carr, as the Raiders will be forced to open up the playbook. The Chiefs have a decent but not great secondary, and they rank in the bottom portion of the league in fantasy points allowed to opposing QB, WR, and TE since the start of 2018. In the Week 1 stat logs, they ranked just 26th in pass defense DVOA and 30th in pressure rate.

Passing Game Efficiency Metrics of Note: Derek Carr has never been a quarterback that is one to sling it deep down the field — or when he does, he has never been all that successful. Expect the Raiders to dial up shorter passes and give him more opportunities to succeed that way. That helped him to average 10.0 YPA in the opener against a good Denver secondary.

The pieces of the Oakland passing game are also surprisingly affordable. Normally, price tags don’t change much when a team plays a Monday Night game, but given the fact that the Antonio Brown release hit the wires on Saturday, I expected most of the sites to price up the top remaining wide receivers and the starting tight end. That did not happen. I was wrong. It wasn’t the first time, and it won’t be the last. Just ask my wife.

Both Williams and Waller are potentially elite options in this spot. The Chiefs are not a defense we need to fear, and Gruden called Waller “special” after the opening game. He had a 7/70 line in the opener, while Williams had a great night of his own with a 6/105/1 mark. Our projected target share shows Williams at 23% (I agree), Waller at 18% (I think he will be higher than that), and Grant/Renfroe at 13% each (I think they will vary on a weekly basis but end up slightly lower than that). Essentially, I expect Williams and Waller to be target monsters. Our projections have both as elite options at their positions. I like all the primary skill players here, though I don’t think it’s necessary to jam in Carr at QB.

Team Quick Summary: Although I like the under in this game and the Raiders only have a 22 point implied team total, we still have options to consider. The top three offensive players (Jacobs at RB, Williams at WR, and Waller at TE) are all under-priced after a Monday Night game in the opener, and this might be the last shot to get them at a discount. 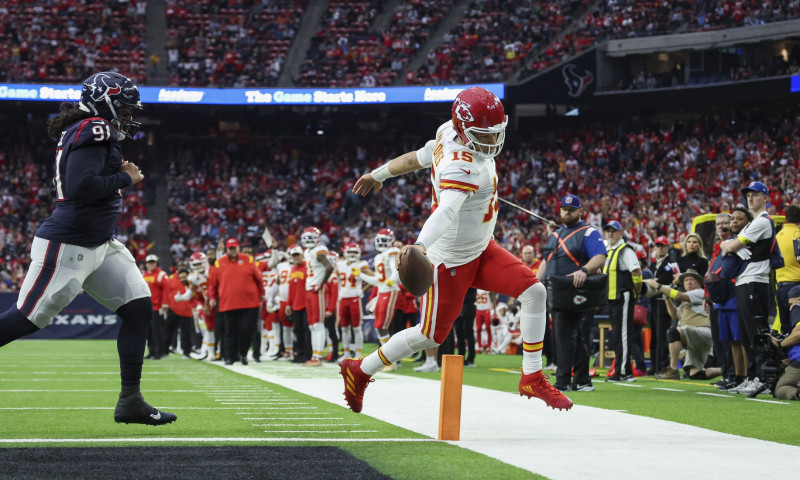 Rushing Opportunity Metrics of Note: The Chiefs generally play with leads in most of their games, and that leads to plenty of rushing opportunities to bleed clock late. The opener was no exception, as the Chiefs had a 26/113/1 rushing line as a team. Expect a similar output here.

Rushing Efficiency Metrics of Note: Oakland allowed 4.1 YPC to the average Denver rushing attack in the opener, and Kansas City has a capable slew of running backs that can wear down an opposing defense. Oakland allowed a rush success rate of 60%, which was one of the worst opening week marks, though they did not allow a ton of big chunk plays.

While there might be good opportunity here, not all opportunity is created equally. This backfield has all the makings of a fantasy nightmare, which is unusual for Andy Reid. He generally has leaned on a lead back in the past, and perhaps he will get there as we get deeper into the season. For what it’s worth, LeSean McCoy did look better than Damien Williams against the Jaguars. McCoy logged a 10/81 line on the ground while playing far fewer offensive snaps, and Williams had just 13 carries for 26 yards. He did salvage his day with a touchdown and six receptions, but McCoy’s 8.1 YPC might get him more work going forward. We actually show McCoy with a higher projected carry share this week. I’m not ready to completely agree with that yet, but it’s not that far off base.

Both of these backs are going to be 1-3% owned this week, and while that would generally give me GPP interest, I just can’t get there. I’d rather take some passing game options.

Passing Game Opportunity Metrics of Note: The Raiders own a fantasy-friendly defense, and the Chiefs ranked 5th in explosive pass percentage last week. The Raiders ranked 5th worst in that same metric defensively. The Chiefs did not give up a single sack in the game, though Mahomes did get hit quite a few times. It’s a testament to his ability to release the ball quickly as much as it is the talent on the line.

Passing Game Efficiency Metrics of Note: Patrick Mahomes is one of the most efficient quarterbacks in the league, and it’s only his second season. He is a special talent. He averaged over 11 YPA in the opener and nearly 9 YPA a year ago, and he oozes touchdown equity.

The Raiders did a decent job defensively last week, but Patrick Mahomes is simply on another level compared to the aging Joe Flacco. Mahomes should be able to pick apart a relatively rag-tag secondary that is now missing perhaps its best piece in Johnathan Abram. That’s bad timing to lose your top safety. Mahomes threw for 200+ yards in the first QUARTER last week before being able to pull off the gas in the second half. He’s simply amazing and should continue to produce big numbers. Given the depth of QB options and the fact that Mahomes has a hefty price tag, he isn’t a must play DFS option, but he is certainly a fine play in any format if you can afford him. He’s the no brainer QB1 this week, and our projections reflect that. It’s all a matter of salary.

The big story line here is what to do with the weapons for this team with Tyreek Hill on the shelf. Here were the snap counts from last week, keeping in mind that Hill basically played one quarter before getting injured.

Watkins went absolutely nuclear in the opener, and Hill’s injury will likely mean we see some chalk on Watkins this week. I understand the logic behind that, but Watkins will likely be owned in the double digits this week. I’ll take my chances on a GPP fade. Hardman played on a lot of snaps but was nearly invisible in that opener, though we can attribute some of that to game flow. With a full week to prepare sans Hill, I think they will scheme to get Hardman the ball more this week. I love the GPP upside at a dirt cheap price tag. It only takes one bomb for Hardman to pay off his salary. It is worth noting, though, that The Athletic’s Nate Taylor has reported that De’Anthony Thomas might be involved this week. I’ll believe that when I see it.

I’ve buried the big news here, and that is that Travis Kelce is likely the biggest beneficiary. There is a ton of value available on this slate, and I will prioritize getting Travis Kelce into a lot of my DFS lineups. He is going to be staring at a massive target share for as long as Tyreek Hill is sidelined. Let’s also not forget that Kelce had a 12/168/2 line against these Raiders last year. His ability to produce massive numbers at a premium position makes him an elite spend in Week 2, especially because of how the salary builds work out. Fit him in if you can.

Team Quick Summary: The Chiefs, as always, should be just fine. I’m not ready to trust anyone in the backfield just yet, but the passing game has some options. Sammy Watkins is a fade for me now that his ownership will be higher, but Travis Kelce is arguably one of the top plays on the slate. Mecole Hardman is a boom/bust GPP option, while you can always play Patrick Mahomes in any format.