Betting Quick Take: I don’t really like what I see here. I have some confidence in Dallas to roll in this game, but do I really want to be on the public side on an in division road game? I’m not sure about that one. I see this line is now posted at WAS +5.5 in some spots, and that’s tempting to even go the other way and take WAS. My recommendation is probably just to find a better situation for the spread where there is more value. The total is also efficient, but I’m willing to consider the under at 47. It’s up to 46.5 and I’m even fine with that. These are division rivals, Dallas is on the road, and the pace of play could be slow. I’ll lean under on this total, with increasing confidence if the total keeps rising. As usual, the dopey public is on the over at about a 75% clip. Confidence Level: 7 out 10

Injuries to Monitor: The big news is Guice being hurt again. It feels like he’s going to be one of those guys who can’t stay on the field, and that works to the benefit of Chris Thompson in DFS. Tavon Austin isn’t of consequence to us. Jordan Reed ‘s absence is bigger news for the Dallas DST than anything else if he misses. Vernon can’t jump over every horrendous tackling attempt he’ll see.

Other News and Notes: We’re still expecting some limitation on Zeke based on coach speak. Here is a link to the ESPN beat report.

Ezekiel Elliott said the pain was “tolerable,” after last week’s opener but noted he did not play as much as normal. He said he is prepared to do more as he gets ready for Washington in Week 2. “I think I’m ready now for a normal workload. Just depends… https://t.co/t3QG5xcIpt

Expected Game Pace and Tempo: The Cowboys got a lot of plays off in 2018, ranking in the top 10. Their defense supports them well in that regard, and their situation neutral pace was surprisingly quick in week 1 (rank 9). Assuming they can handle their business, they are the favorites to run more plays than Washington. The Redskins are slow and we don’t have a reason to expect significantly more plays per game from them in 2019 than their 7th lowest volume a season ago. They were dead last in situation neutral pace in Week 1, and could turn this one into a borefest one way or another. They could either succeed on offense and limited production for everyone, or fail and cause the Cowboys to grind clock late. Either way, this shouldn’t be the game stack of the week in the most likely range of outcomes. 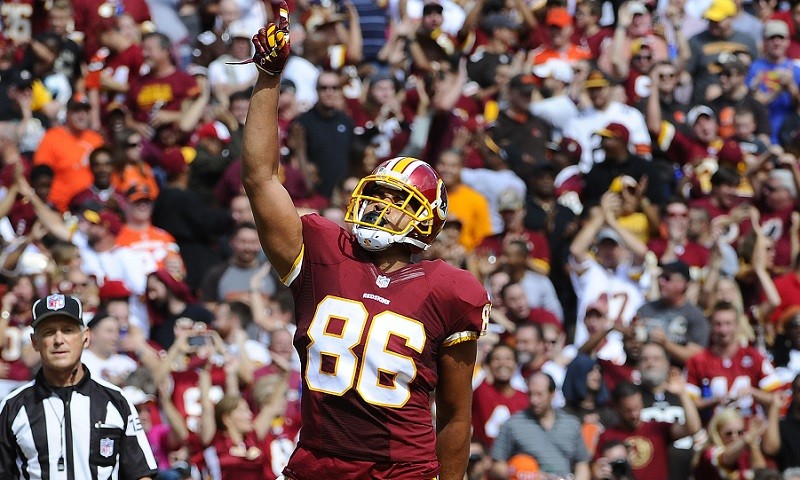 RotoGrinders projections are on the very conservative side for Adrian Peterson, and I think that’s a matter of taste. I’ve seen some models feeling good about his high share of rushing (between 50 and 65%) and low price points ($3400 on DraftKings). The case against him includes game script and the idea that the coaching staff had otherwise moved on from him as recently as a week ago. At $4800 on Fanduel, you’re basically asking for a TD (maybe 2) but I can see that as “not impossible” for tournaments. Dallas wasn’t fabulous a week ago stopping Saquon, and Peterson showed us a sliver of juice with his yards created performance in 2018. On full PPR sites like DraftKings, I’d rather speculate on the game script friendly Chris Thompson for just $500 more. He received a whopping 10 targets last week, though he wasn’t able to find running room or the end zone. He’ll be in business big time if he is able to do either this week, at this price, and with this kind of guaranteed opportunity.

We have Keenum as QB28 this week, and moving him much higher requires some rose colored glasses in my view. You can’t discredit some of the nice metrics he posted against the Eagles last week, but it would also be foolish to dismiss a much larger sample size of mediocrity. The Cowboys defense has the ability to disrupt as a mid-level group, and can also control the game script to force predictable passing situations late. Unless you suddenly think the Redskins offensive line is good after playing above their heads week 1, I would be staying away from Keenum.

Since I don’t like Keenum in this game, there isn’t much I can say for looking at rookies, injury prone WRs, and ancient TEs for my DFS teams either. The prices are in the basement, but the Cowboys were also incredibly stingy against WRs in terms of fantasy points allowed a season ago. I can’t make a good case for anyone here, and I’d only be chancing someone like McClaurin if you put a gun to my head. He led the team in air yards, and looks NFL game ready right of out the box.

Quick Summary: Chris Thompson is a nice play in GPP, and sure roll the dice on Peterson if you hate fun. Otherwise, we’re more interested in the Dallas defense than we are the Redskins passing game… even on the road. 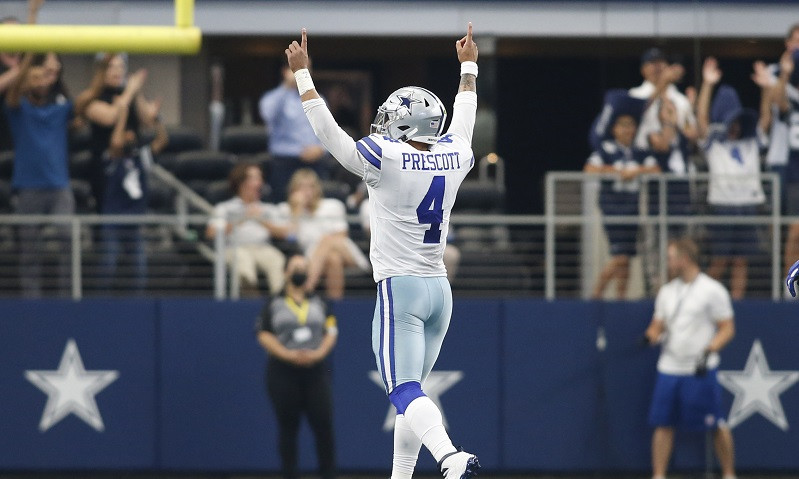 The Cowboys could find themselves in positive game script, and RG has optimism with a 62% share of rushing attached to Zeke for Week 2. We’re also giving him some healthy target share, which further boosts his raw projection to RB6. I don’t really agree with this optimism, as I expect fewer targets myself. At the end of the day, he’s still the red zone back and the player most likely to secure DAL rushing TDs. That’s enough to call him a GPP play, but I’d personally rather spend elsewhere. They have confidence in Pollard while Zeke works his way back into game form. It’s worthy noting “game form” is a probably mostly in their minds, as he looked as elusive and powerful as ever in his time Week 1.

Dak was QB5 for us in the early week projections, and he has upside to finish as QB1. He’s certainly in a fine matchup against a beatable Redskins secondary, and flexed his muscles at an elite level against the Giants. I think you can put him in the conversation for cash games, but is probably best suited as a high ceiling GPP play.

Amari Cooper is projected as WR 5 this week and in a prime spot to blow up again. DeSean Jackson was able to roast this team for a GPP winning week, and the weapons surrounding Cooper suddenly look threatening. Josh Norman is no longer a player we fear, and nor is Quinton Dunbar in coverage. Cooper has the opportunity in terms of Air Yards and targets to shine, and he’s one of the very best GPP plays available at the position if spending up. Gallup remains a volatile option ideal for game stacking or contrarian pivots in Dallas stacks. He looks primed to ascend and his opportunity share is increasing. Cobb is more difficult to trust in DFS, I wouldn’t want to use him in a game that has so many outcomes in the range of negative game script for the pass.

Quick Summary: Zeke has playing time question marks, and isn’t at the top of any list this week. Dak and Amari can be considered a top GPP stack, while Gallup is more of a lower owned pivot than a top option.

Optimal DFS Plays: None (All the best plays in this game are for GPP)