FantasyLabs was created as a tool to help users become profitable at daily fantasy sports. Their main objective is to offer a place where you can create your own fantasy trends, shape your own models and build DFS lineups. Not only does Labs allow you to create and test your trends and models, but they also offer player ratings, trends, player models and fantasy analysis from their team of experts.

We’ll take a much closer look at site features and offerings later in in this article. Before we do that, let’s find out who is behind the creation of this product.

About the FantasyLabs Founding Team

Labs was co-founded by two well established names in the fantasy world. One being Peter “CSURAM88” Jennings who is a DraftKings analyst and ESPN Fantasy contributor, as well as a former contributor to RotoGrinders.com and on-air Grinders Live personality.

The other co-founder was no other than Jonathan Bales, a DraftKings analyst and author of the popular series “Fantasy Sports for Smart People.” Bales has also contributed to NBC, ABC, and the New York Times and is considered one of the best writers in all of daily fantasy sports. He also is the original founder of RotoAcademy, which is now available exclusively here on RotoGrinders.

This review will cover FantasyLabs from top to bottom and give insight on everything the platform has to offer. We will look in detail at the different pro trends and models, optimizer, player pages and much more.

It only makes sense to start by looking at what I consider the bread and butter of what FantasyLabs has to offer: their Player Models. 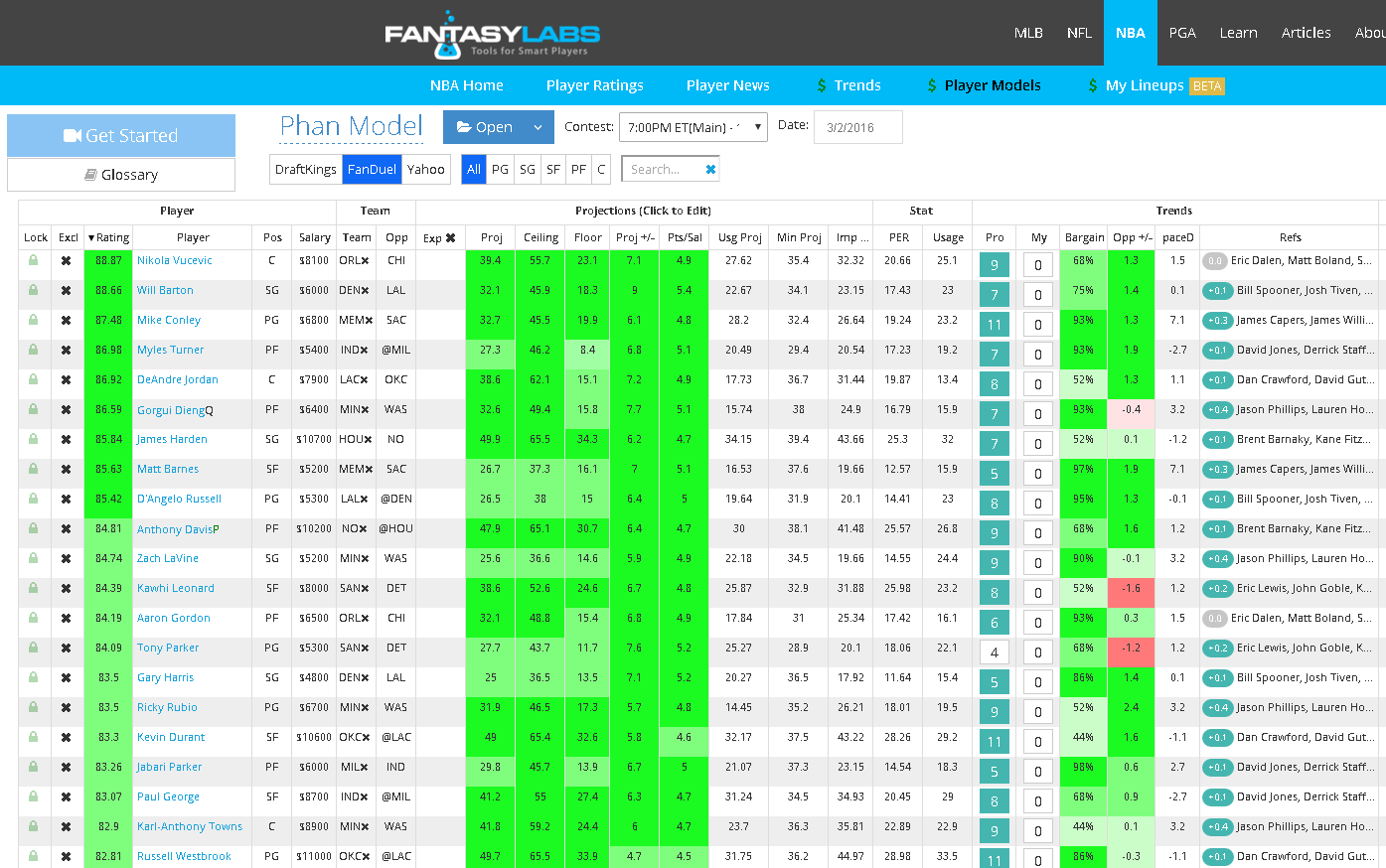 FantasyLabs is currently offering models for MLB, NFL and NBA. At the time of this writing, PGA is in the works.

Let’s use the NBA model as an example.

Across the top are options to narrow down your search so you can get exactly the player pool, pricing, site and model you desire.

At the moment, the models are only available for DraftKings, FanDuel and Yahoo. Time will tell if Labs will expand from these industry giants to some of the smaller sites.

Once you select which daily fantasy site you wish to filter on, the next logical filter would be the contest. The “Contest” tab gives the option to choose which slate to include players from. This is very useful for people who play multiple slates daily.

The next selector would be which model you want to use. As previously mentioned, FantasyLabs was created so you can build your own models, immediately test them and then create fantasy lineups based on those results.

Although creating your own models is an extremely powerful and useful tool, it will take a good amount of time and daily fantasy knowledge to use to its full potential. Let’s say making your own models is not something you are not interested in. The good news is that Labs has “Pro Models” already made that you can select from the drop-down and use without having to do any upfront work yourself.

These “Pro Models” were created by the aforementioned Peter Jennings and Jonathan Bales, as well as another Labs team member, Justin Phan. They offer the Bales Model, Cash Model, Phan Model, and a Tournament Model. Whether you play mainly cash, GPP, or even both, they have a “Pro Model” pre-created for you.

Here is an example of what the default NBA “Cash Game” model is looking for when ranking players, based on a 100 point scale: 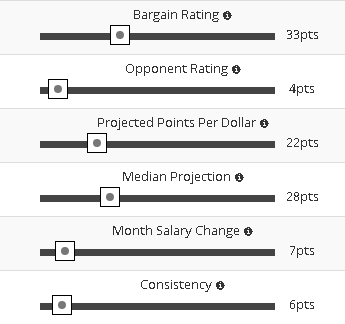 Now that we have looked at the different model choices, let’s see what each offers.

Below you’ll see an image taken from the Phan Model where it is ranking the top 3 players currently for a slate. The Models include much more than what is shown in this picture to influence the ratings of each player. Not shown are influences like Vegas Odds, stats, recent performance, season-long production, player trends and more.

You might have noticed that I said “the top 3 players currently” and that is because Labs is constantly updating player ratings throughout the day as news and information is released. This is extremely important to daily fantasy success, especially in a sport like NBA DFS where injuries and late scratches open up major value.

The last thing I want to touch on is the “Projections (Click to Edit)” feature they offer. FantasyLabs provides their own projections on each player, but in the situation where you want to put in your own, they offer that option as well. After doing so, the rating feature will automatically update and reflect which players are now the top options. This is a helpful feature for the hardcore DFS grinders out there.

Overall, the Player Models are very impressive and offer a near unlimited amount of customization to fit exactly what you are looking for. There are not many models that are this in-depth available in the industry, especially one that is constantly updating to the most recent news.

Trends is one of three features you get when you pay for a FantasyLabs subscription. (We will look more at the subscription options later on in the Review). The other two being the Player Models that we touched on and also the Lineup Builder feature.

With the Trends feature, you can perform huge amounts of research on how specific variables affect performance. Like most things on FantasyLabs, you can customize trends, create your own, or use the ones Labs have created for you already. 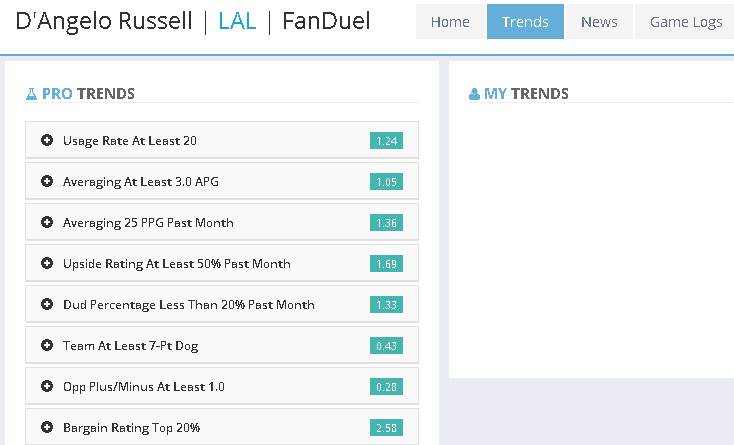 This is a great way to find out why a player’s overall rating is so high or low. Labs provides you with the exact trends a player currently has going for them. For example, in the screenshot above, D’Angelo Russell is one of the top options tonight. That is explained by looking at his eight pro trends he has going for him in this matchup.

Lineup Builders are becoming commonplace right now in the daily fantasy sports industry. When tournaments have big prize pools, they typically have a massive amount of entries as well. Lineup Builders like the one offered by Labs (as well as here on RotoGrinders) makes it easy and quick to create multiple lineups for a day’s games. 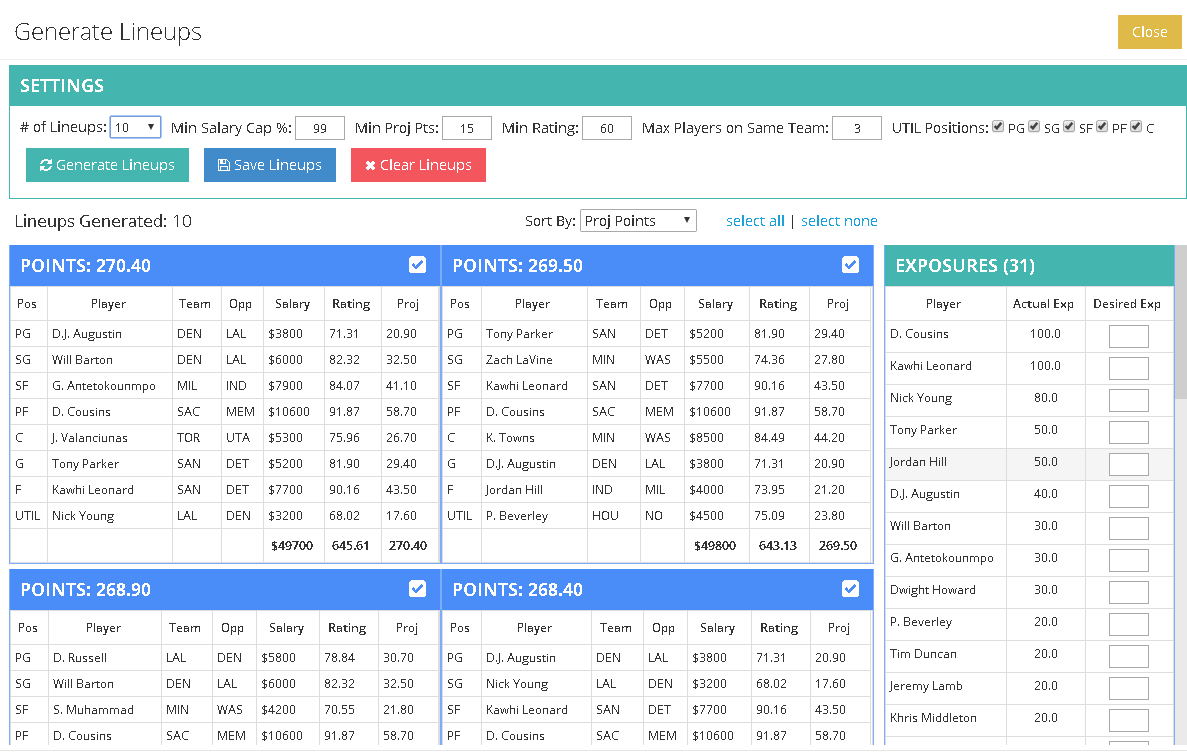 As you can see from the image, you have a lot of options with the Lineup Builder. You can make between 2-100 lineups at once and customize which players show up. The exposure percentages for each player offers an option for you to select how much exposure you want for each player once your lineups are generated. There are options to exclude players as well, which makes it nice if you dislike one of the top options or are intentionally fading someone.

Not only can you make multiple lineups, there is also the option to make an optimal lineup. Below is an example of an optimal lineup without anything being adjusted. There are options to exclude players which makes it nice if you dislike one of the top options or are intentionally fading someone. 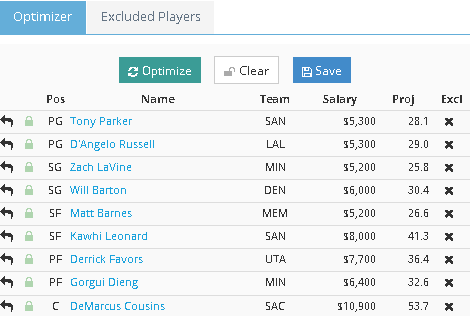 FantasyLabs has a lot to offer but comes with one of the steeper prices around the industry. To gain full access to “everything” on the site, it will cost $59/mo. They offer the option to try it on a trial basis for $15 as well.

For some people, spending $59 a month is a lot and that it totally understandable. I would say Labs is much more a site for a serious daily fantasy sports grinder than a casual player just getting started.

Labs offers a free mobile app for both iPhone and Android users. The app works very fast and clean. It can do pretty much everything the site can.

FantasyLabs has really expanded its product since its creation. Not only do you get the trends, player models, lineup builder, but you also get plenty of free information as well. They have since added:

— Daily Articles – Although you have to pay for most of the powerful tools that Fantasy Labs has to offer, they also have free content that is very sharp. Some of their daily articles include a game by game break down of each NBA slate, NBA/MLB trend of the day, and general strategy articles written to help you be successful in DFS.

— Daily Podcast – The Daily Podcast is pretty typical to what other sites offer, providing listeners with a breakdown of the day’s slate where a few experts share their top plays. The one thing I found was they post this podcast nice and early, so it will be there in the morning when there can be a lack of content

FantasyLabs has really expanded its product since its creation. Not only do you get the Trends, Player Models, Lineup Builder, and other paid features, but you also get plenty of FREE information and analysis. They have added daily articles, YouTube videos explaining how to use certain tools and podcasts to help you be successful at daily fantasy sports. Their moto is “Tools for smart people” and it’s easy to see why with the wealth of info they offer.