We walked through what you need to know about Showdown contests and took a look at early season results in another primer article. Read that article first if you need background on Showdown contest.

This article is going to build a comprehensive view of what optimal roster allocations should be for different game profiles based on actual historical results. Rather than try to project all players and correlations, we’re going to use recent historical games (2014-2018) to see what their optimal lineups tell us about how to play prospective contests.

This article will specifically focus on total roster construction, while another piece digs specifically into the the all-important Captain (CPT) position.

I’m using the same methodology to project optimal lineups and optimal CPT selections. This involves taking a sample of 200 random games since 2014 that fall into four categories: 1) All, 2) Shootouts (50+ combined points scored), 3) Slugfests (Less than 40 combined points scored), and 4) Blowouts (15-point margin of victory). for each category, I take the random 200-game sample and calculate the top-5 optimal lineups.

Once we have the optimal lineups from the historical contests, we can total the individual positions that compose those lineups to get an idea of how to construct optimal lineups in the future.

For each upcoming game, I’m going to find the optimal lineups from the most similar historical contests as I’ve done for a handful of Showdown contests already this year.

The graphs and tables below give you an idea of how to construct lineups not just based on matchups that fit an exact game, but for different game profiles. This can be particularly helpful if you think the game profile for an upcoming contests is very different from the expectations of the market.

There isn’t one way to create optimal Showdown lineups, but being informed about how a large sample of games have played out in the past will give you an edge on players who are guessing or are over-reliant on recent contest results for projecting the future. 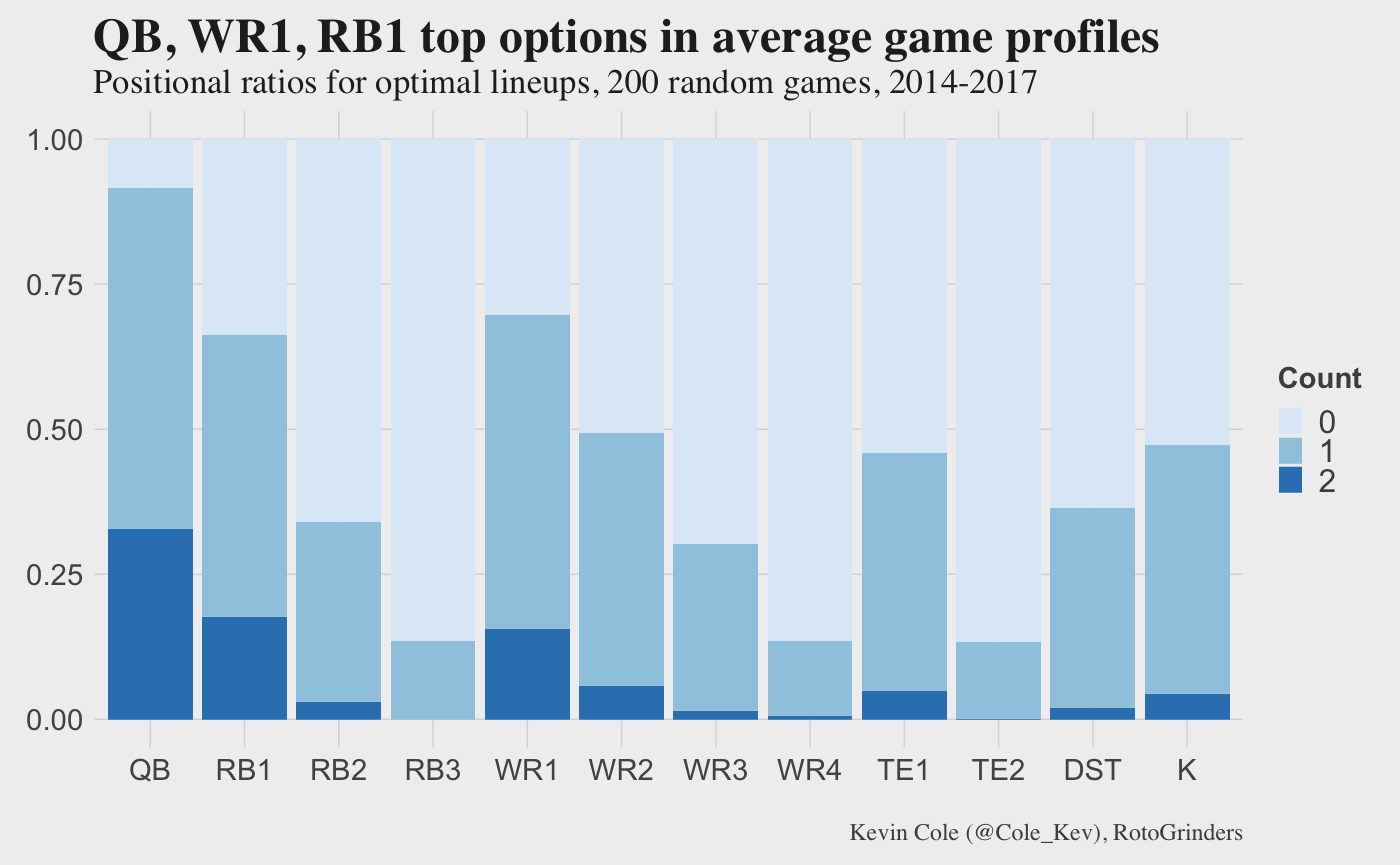 The way to read these graphs is that this is the combined for both team allocations by positional ranking. So in the case of the random sample of all games above nearly all optimal lineups had at least one QB, with nearly 35% having both starting QBs. 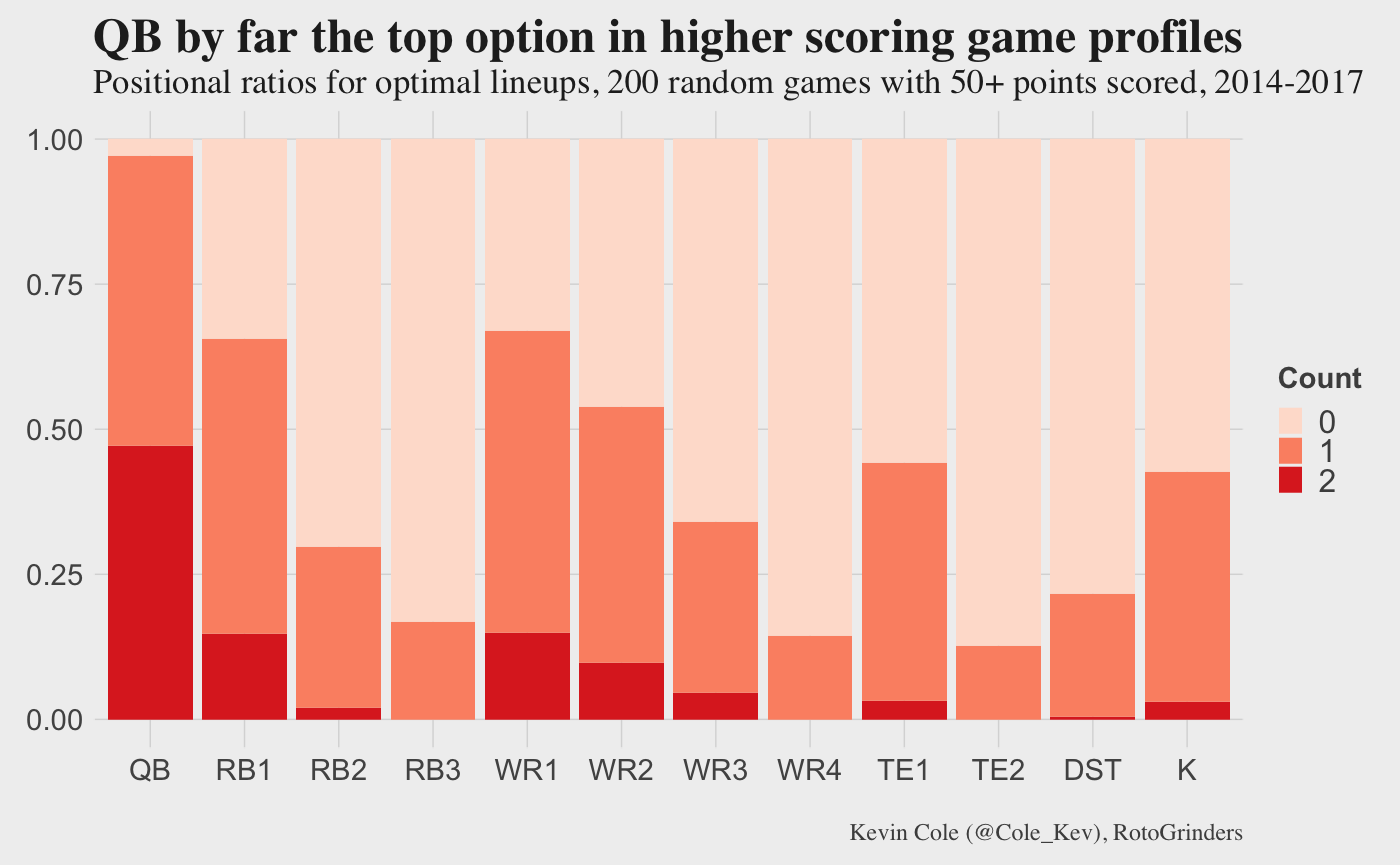 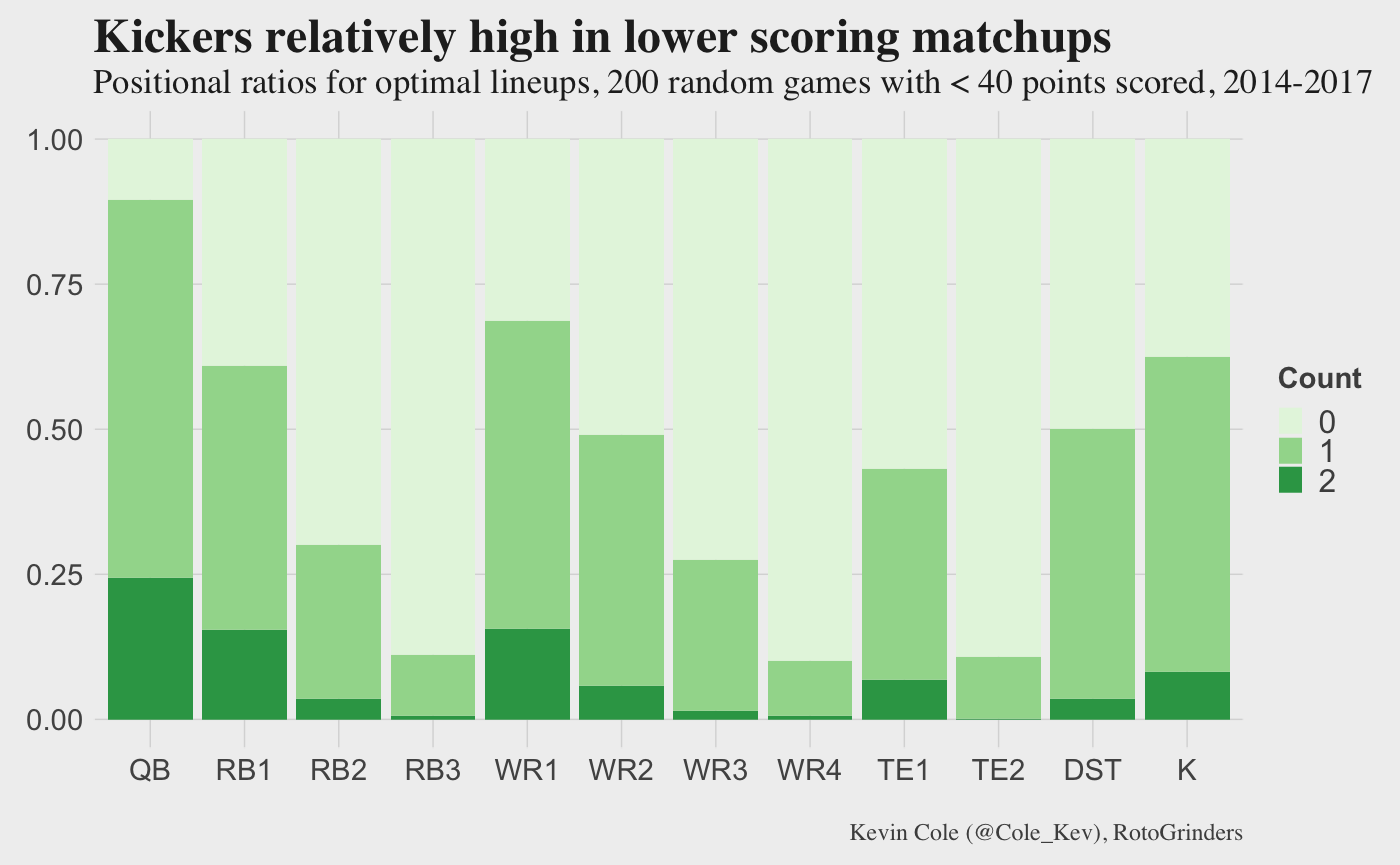 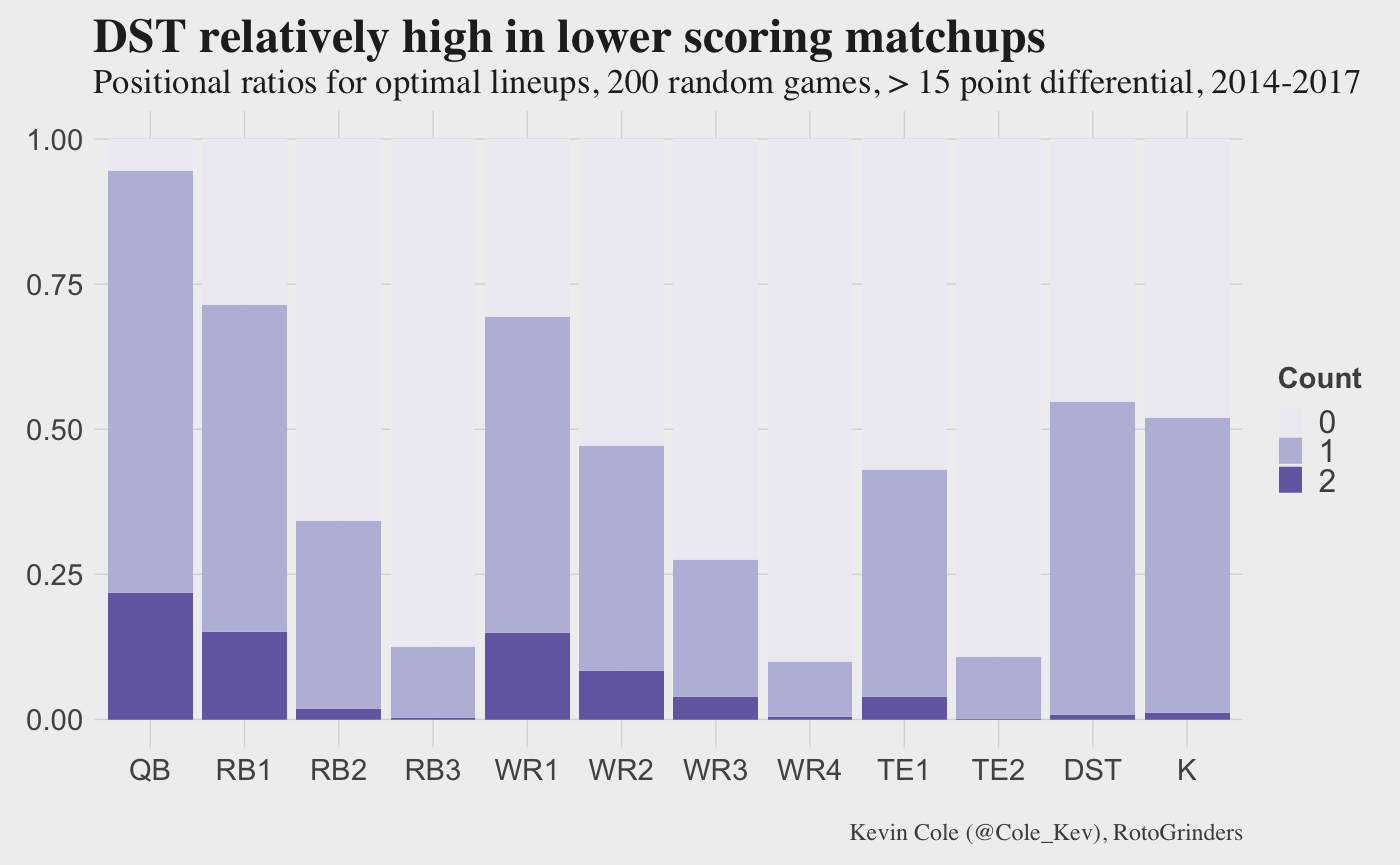 Here’s a way to break things down a bit further into favorite-underdog by positional rank, and then compare the different game profiles to see which positions rise/fall in importance versus the typical optimal lineup. 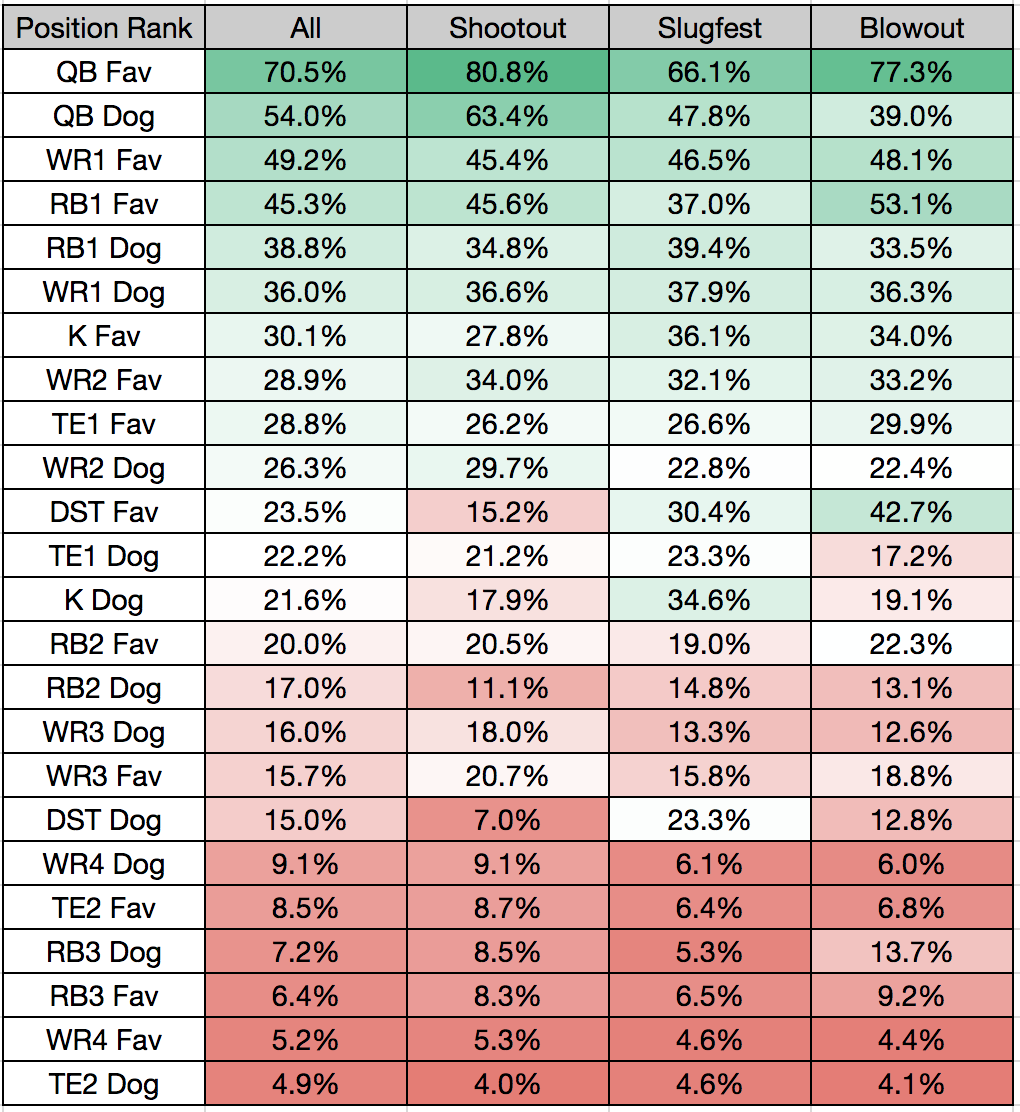 The way to look at this table is to notice the differences across the board. For instance, you’ll see that the QB of the favorite team is on the optimal lineup consistently no matter the game profile. Whereas the QB of the underdog has his optimal allocation fall dramatically in slugfests and blowouts, and there is the opposite effect of the DST of the favorite in those situations.

In the other primer article, I’ll dig specifically into the optimal CPT allocations for different game profiles.