Welcome to the beta version of a new product here at RotoGrinders, DraftKings Showdown SlateIQ. For those not familiar, we offer a SlateIQ product for NFL, NBA and MLB main slates that uses our very own ResultsDB data to match the upcoming main slate to the historical DFS slates on DraftKings that are most similar based on several different characteristics at the slate, game and player level. You can take a look at the NFL Week 12 SlateIQ here.

Tonight the Baltimore Ravens travel to Los Angeles to take on the Rams on Monday Night football. The Ravens are slight road favorites as they’re currently favored by 3.5 points, and the game total sits at a solid 47.5 points. If we use this as our guide and expect a competitive game with moderate scoring where the Ravens squeak out a win, let’s take a look at where we can find leverage in both our Captain spot and our overall lineup construction on tonight’s showdown slate:

Two pretty clear captain choices have stuck out in games like tonight, the RB1 and WR2. It’s also interesting that the QB1 and WR1 have also provided positive leverage, so we have a few more optimal captain options for tournaments tonight than we have had in Showdown SlateIQ thus far. What we do see, however, is that punting your captain spot with a cheap skill player, DST or kicker has been a no-go. Logically this makes sense since we expect some decent scoring and a close game (and thus some decent fantasy scores from position players), so you want to give yourself access to the players with upside to be one of, if not the, highest scoring player on the slate in the captain spot. If you can comfortably fit Lamar Jackson in captain, I certainly wouldn’t fault you for it, but historically the greatest leverage has been on players like Mark Ingram and Marquise Brown since you’re getting access to the key producers from the higher scoring team while being able to save a few bucks to fit a more well-rounded lineup than you might be able to with Lamar, or even with Cooper Kupp on the Rams side.

So, you’ve got your captain figured out, but what positions should you be using to fill out your lineup? The top 0.1% of lineups have been quite a bit heavier on 2 positions, RB1 (I.E. Mark Ingram and Todd Gurley) and Kicker, while they’ve been much lower on WRs and TEs in general, as well as RB2s. 90% of top lineups have roster an RB1 with 40% using both team’s RB1. I’ve mentioned my aversion to kickers in previous SlateIQ’s, so it still pains me to mention it, but we’ve seen top lineups utilize kickers much more frequently than the field, which makes sense tonight given the lack of viable cheap skill position options from these two teams. Finally, you can see that top lineups actually were significantly lower on WR1s than the field, which again makes sense tonight with both of these teams not having quite as much of an alpha WR1 as other teams (I.E. no Michael Thomas, DeAndre Hopkins, etc.). 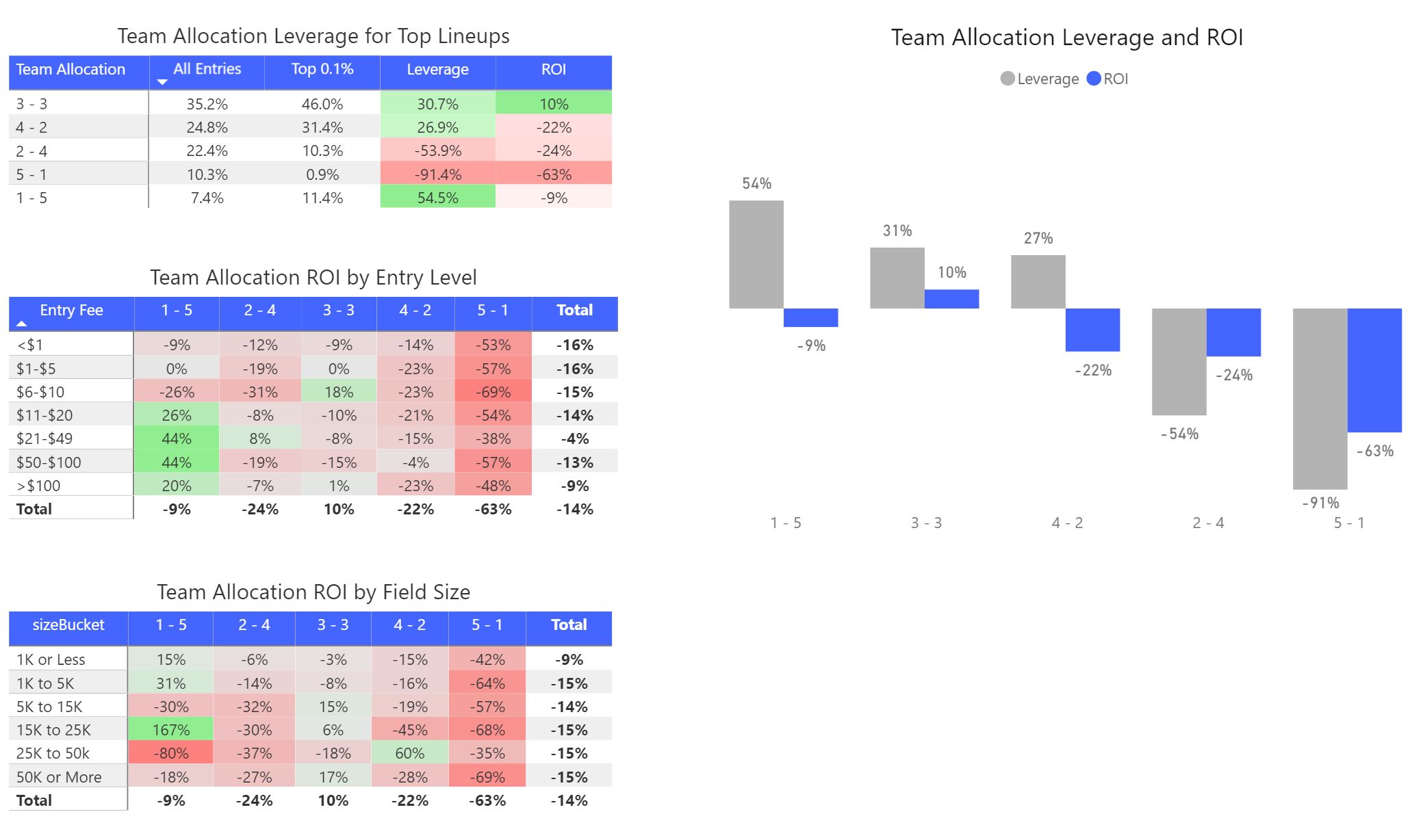 The leverage on how many players from each team to use is probably the most interesting SlateIQ nugget tonight in my opinion. We definitely see the balanced builds being the most popular (3-3 and 4-2 w/ 4 Ravens) while also still providing some solid leverage. If I were to MME this slate, I’d definitely lean heavily towards these types of builds. One more off the wall build sticks out as a really intriguing leverage play, however, that I would make sure to get exposure to tonight. A 1-5 build with 1 Raven and 5 Rams doesn’t have the highest percentage of top lineups, but it does provide the greatest leverage on the slate. It also makes a ton of sense given the context of these two teams. We know Lamar Jackson is arguably the best asset in fantasy football, and we can envision a scenario in which he soaks up nearly all of the production for the Ravens, particularly rushing, while spreading out his passing yardage across his many different weapons utilized by the Ravens. Then, on the Rams side, with Lamar doing all the work for the Ravens and forcing the Rams to play catch up, the Rams hang in the game by finding success across several of their different offensive weapons. You can use kicker Greg Zuerlein for value on the Rams side, as outlined in the chart above, for a really unique build playing to a really specific Lamar heavy lineup build that offers you a ton of leverage in tournaments.

As you can see, depending upon how the game plays out, the optimal way to build your showdown lineups can drastically change. We are continuing work to build this Showdown SlateIQ out even further with more flexibility for you to analyze different game types, so be on the lookout for that as soon as we can knock out some of the heavy lifting to make that possible for you.