2018 is the season of DraftKings Showdown contests in NFL DFS, and some of the biggest prize pools each week are on contests from single-game slates. These Showdown contests gives DFS players a simplified format, but it doesn’t mean that there isn’t a big differentiation in skill.

With new contests come new rules and ways to get ahead of the competition by anticipating how the new rules will affect scoring. In a series of primer articles I’m going to walk through the rules for Showdown contests, how to think about maximizing profit potential, and what historical contests of different game profiles tell us about how to construct total rosters and the all-important Captain position.

Showdown lineups are comprised of six players, five FLEX and one CPT, or Captain. The CPT is what brings a new wrinkle to DFS strategy, and also helps increase diversification in large, single-game contest. The CPT position delivers 1.5x the fantasy points as a normal FLEX position, but the price tag for the player is also increased 1.5x.

In addition to traditional offense skill positions, entries can also roster kickers and DST. All rosters must have only one CPT and at least one offensive player from each team.

We can gain a rough understanding of how to structure lineups based on the general formate, but the unique way every player has an influence on every other player on the slate makes roster construction a more holistic task.

How limited results have worked out so far

In this post, I’m going to go through how results have played out so far this season in limited contests, and in subsequent posts I’ll walk through optimal allocations for a much larger sample of historical matchups, grouped by game profile (average, shootout, slugfest and blowout).

We’re looking at the results from the largest TNF, SNF and MNF contests from Weeks 1-3 in this analysis.

First, let’s look into how the winners (top-0.1% of entries) have compared to the field with CPT selections.

The field has largely been right about CPT allocations, other than at the QB position where winners have had a much smaller allocation. That difference has been spread out to other positions, with WR1 being the biggest successful overallocation versus the field. Multiple TNF contests had huge performances from the WR1s like (Julio Jones and A.J. Green), which is likely driving the allocation.

DST has also significantly outperformed field expectations. But unlike WR1 where the winner allocation matches the optimal allocations I found, DST has been much more successful than I would have expected.

I expect the trend of success for DST to start to moderate, as much of the results so far have been due to disproportionate defensive touchdowns.

Here’s how the total roster allocations for top entries have compared to the field. Remember that the percentage allocation can top 100% as both positions can be rostered from each team. 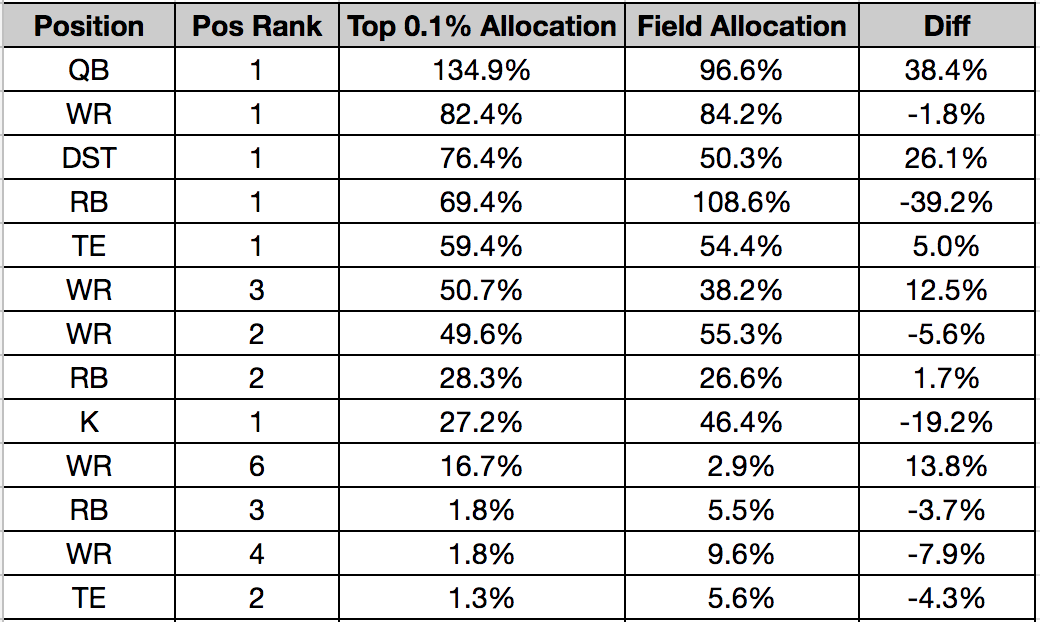 It’s interesting that the QB allocations for CPT are lower for winners, but the overall allocation is higher. Winners have succeeded by rostering one or two QBs consistently, but not making them the first CPT option. Exactly what you would expect based on the optimal allocation projections in other primer articles.

DST is still outperforming what we would have expected based on optimal lineups, to the tune of a 76.4% allocation versus something closer to 50%. The field has been “wrong” with a lower allocation so far, but that should correct going forward.

How to think about results

There’s a lot to takeaway from early season showdown results, but the sample is admittedly small. What makes this more useful is comparing what we’re seeing here to other primer articles that calculate optimal allocations on a much larger sample of historical matchups, across a number of different game profiles.

Some winning trends we’ve seen in early season Showdown contests will persist, while others will likely moderate. Knowing which trends to fade and play is what the simulations for total rosters and the CPT position will help going forward.