Welcome to the beta version of a new product we started this year here at RotoGrinders, DraftKings Showdown SlateIQ. For those not familiar, we offer a SlateIQ product for NFL, NBA and MLB main slates that uses our very own ResultsDB data to match the upcoming main slate to the historical DFS slates on DraftKings that are most similar based on several different characteristics at the slate, game and player level.

We are creating something a little bit different for NFL Showdown SlateIQ since, well, Showdown contests are quite a bit different than main slate contests. Instead of trying to match previous slates, we want to match previously similar games. So, in order to do that, we created Game Archetypes from the last couple years of games based on the total amount of scoring in a game, as well as the final point differential. That way if we think a game is going to be a close, low-scoring slugfest, we can see how we should be building our Showdown lineups based on what has been winning in Showdown lineups in other close, low-scoring slugfests.

This Sunday we have the Kansas City Chiefs taking on the San Francisco 49ers in Super Bowl LIV in Miami, and DraftKings is offering some insane prize pools on their Showdown contests. They have not one, but TWO contests with $1 Million first prizes. We have nearly a pick em game with the Chiefs favored by 1 point, and a huge total of 54.5. If we use this as our guide and expect an extremely close, high-scoring game, let’s take a look at where we can find leverage in both our Captain spot and our overall lineup construction on this huge Super Bowl Showdown slate:

Well, it looks pretty clear and obvious that in similar games either of the team’s WR1 has been far and away the best captain option. As we see more of the field gravitate towards the high profile QBs and even the starting RBs, the number one WRs on each team have garnered less captain ownership (at about 14%), but they have made up nearly 50% of the top lineups. This doesn’t mean we should necessarily forego QBs like Mahomes if we are multi-entering since QBs did make up ~ 20% of top lineups, but this certainly hasn’t been a spot to gain leverage on the field historically. The only other spot in these games that has been advantageous vs. the field has actually been punting your captain spot with the WR3 from either team (I.E. someone like MeCole Hardman or DeMarcus Robinson from the Chiefs or Kendrick Bourne from the 49ers). These players almost certainly have no shot to be the highest scoring player on the slate, but in these shootouts we will occasionally see a large amount of fantasy points scored from the expensive studs on these high-powered offenses, so much so that we need to jam as many in as we can and hopefully get a ceiling performance from one of these ancillary WRs.

So which positions should be using from each team? Couple of key takeaways we see here are that top lineups have been way heavier on QBs than the field, with a whopping 61% of the highest finishing lineups actually using both QBs, and none of those lineups fading QB entirely. So while you may think you’re being super sneaky fading both QBs in an expected shootout, you’re probably just donating your money to the other players. Additionally, top lineups continue to be much heavier on WR1s, and WRs in general, than the field, while they are much lower on RBs. This logically makes sense because if we are expecting a back and forth shootout, it’s pretty unlikely that either team’s running game is having a dominant performance as this would lead to lower scoring with the clock constantly running and lower yards per play. 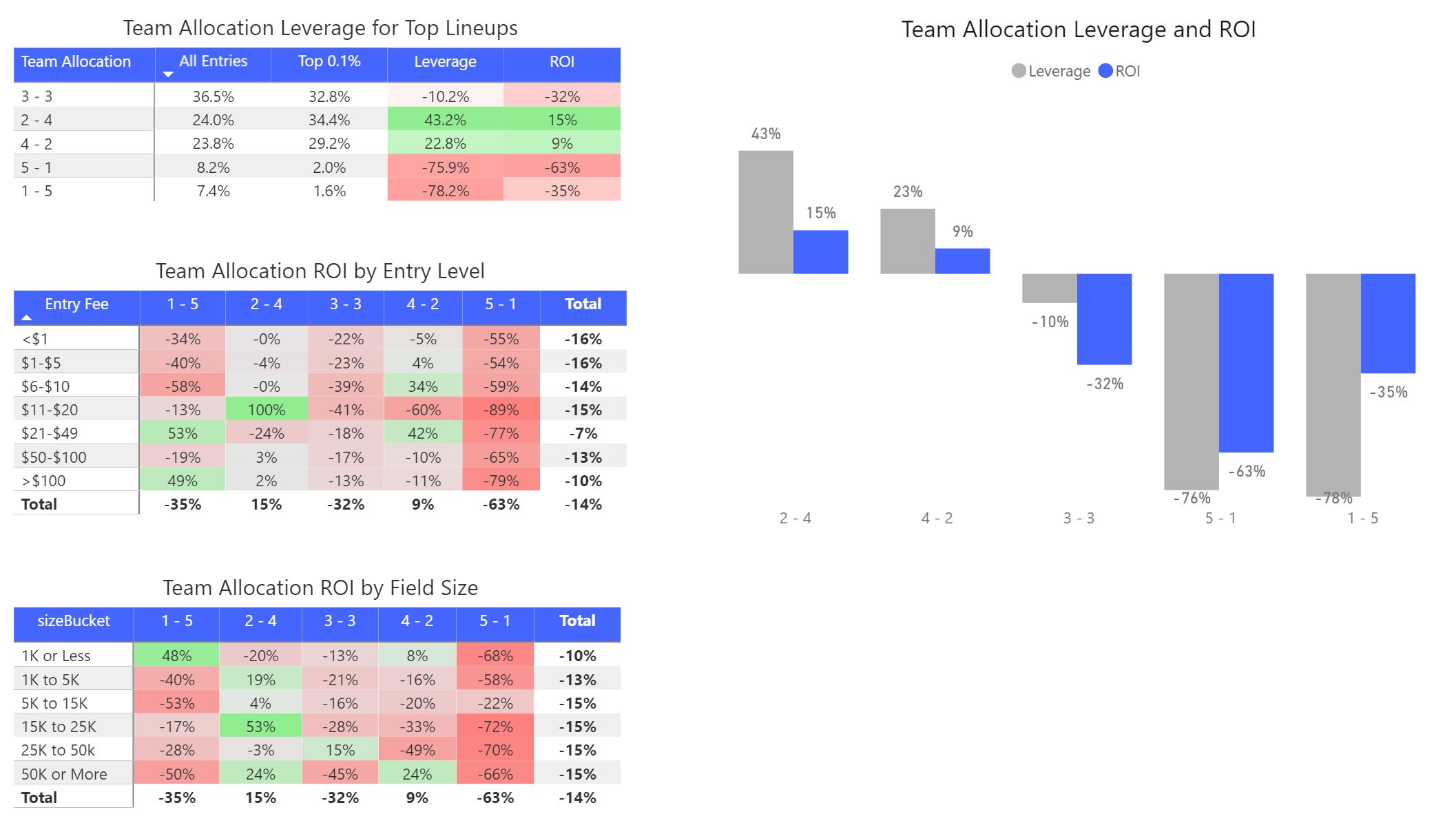 On certain Showdown slates, we see the 5-1/1-5 roster construction (with 5 players from one team and only 1 player from their opponent) pay huge dividends, but that has not been the case here. That being said, the totally balanced 3-3 lineups have not provided any leverage either. Those lineups are the most popular by the field, but they have not actually made up a greater percentage of winning lineups than the just slightly unbalanced 4-2/2-4 lineups.

What if the games goes a bit differently?

So, based on the spread and total in this game, and the quality of both of these teams, we fully expect a really close, competitive game with a good amount of scoring. However, as we all know quite well, NFL games don’t always go exactly according to plan. It’s certainly possible the Chiefs high octane offense could carry them to a relatively easy win if they can slow down Kyle Shanahan’s offense. Alternatively, the 49ers have appeared to utterly dominant on both sides of the ball since getting fully healthy, and they could end up smooth sailing to a win if they can maintain their offensive output while slowing down the Chiefs offense. If we get a game like this with moderate scoring and a semi-easy win, what kind of showdown teams should we be making?

Whoa, quite a big difference than the nail-biter shootouts above. Rather shockingly, DST has actually been far and away the most advantageous captains in these games. This is a really interesting approach to this particular showdown slate in my opinion because everyone and their mother is expecting a shootout, so a very small percentage of the field is going to be playing DST in captain, maybe even lower than the 10% you see here. However, if the game does go slightly differently than we expect and, say, the 49ers seemingly dominant defense is able to apply relentless pressure to Mahomes and stumble into a defensive TD or two, you have seriously massive leverage on the field. On the flip side, we’ve seen the 49ers ride their ground game for a while now as they’ve manhandled their playoff opponents, but if the Chiefs offense can force them to start throwing, they can certainly force Jimmy G into some mistakes, and they also have the added benefit of extremely explosive return men in MeCole Hardman and Tyreek Hill that can take one to the house on any play. While none of us are expecting this type of game script, this data is the perfect example of how much edge you can gain on your opponents if you plan for games going differently than we all expect.

In this game archetype, we see a couple very distinct differences from the shootouts. First, top lineups are still heavy on QBs, but not as much so and pretty much even with the field. These top lineups are still a bit heavier on WR1s, but they are lower on the ancillary WRs. Finally, sticking with the DST trend from the captain data above, winning lineups are a lot heavier on DSTs as well as RB1s. Like we talked about above, if we get a slightly lower scoring game where one team has a somewhat decided advantage, possibly due to their defense playing really well, we are naturally going to get quite a bit more production from DSTs (obviously) and RBs, particularly from the team with the lead + strong performing defense. 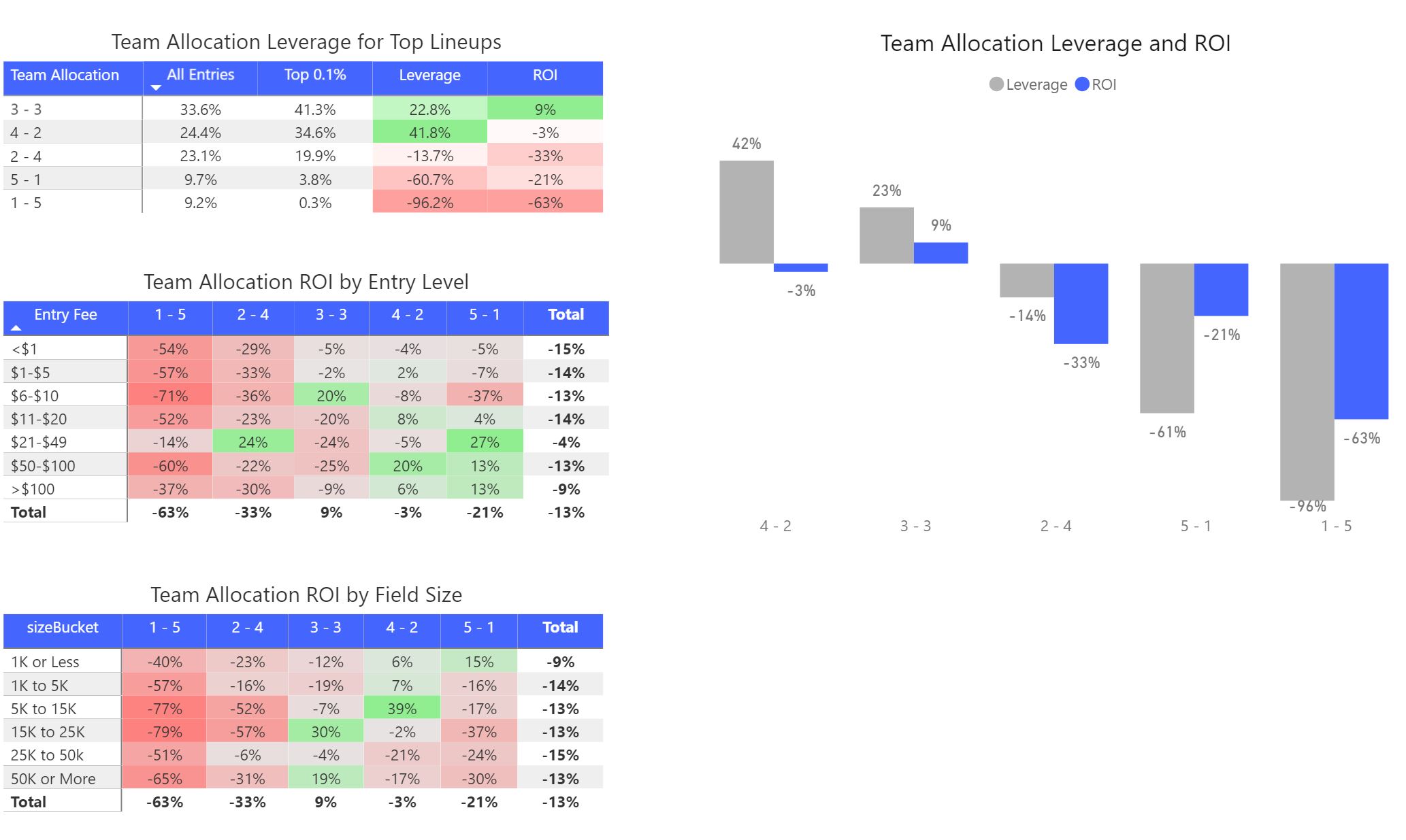 There aren’t a ton of major takeaways here. Similar to the shootout, we still don’t want to get overly heavy on 1 particular team and load up 5 players vs. 1 (with only 4% of top lineups being of this variety), but we do see the 3-3 build become a bit more advantageous, as they jump up to 41% of the top 0.1% of lineups. Logically this makes sense because if you get the DST from one team performing really well, we are still likely going to get a couple other players from that team having good games (like the RB?) since this still isn’t a total slugfest of a game, but their opponent is more likely to have a few optimal players since they are going to have the opportunity to run more plays, especially in trail mode late in the game.

As you can see, depending upon how the game plays out, the optimal way to build your showdown lineups can drastically change. While these two scenarios certainly aren’t the only ways this Super Bowl can play out, they do give you a glimpse into how drastically the flow of the game can impact the outcomes and leverage spots of these DraftKings Showdown contests.