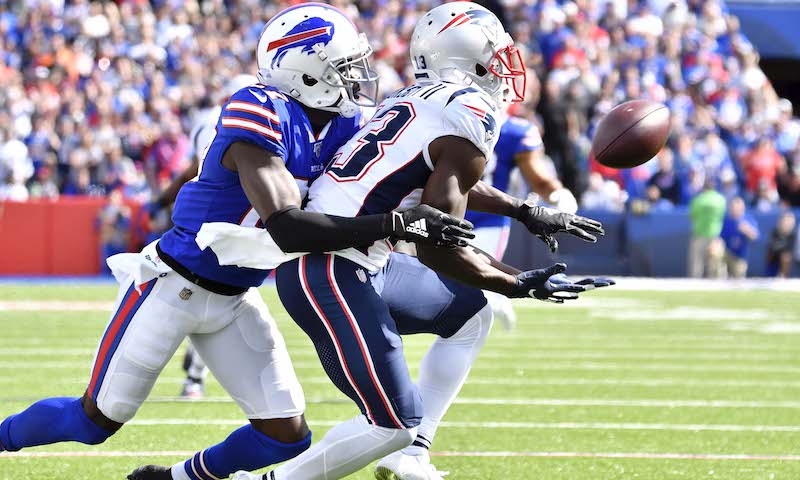 The Bills have already wrapped up the AFC East Championship, but a sweep is on their mind ahead of their Monday Night Football matchup against the New England Patriots.

It’s a feat the Bills haven’t accomplished since 1999, as the Patriots reigned over the AFC East for much of the last two decades, while the Buffalo Bills were often bottom feeders. This year is different, though. The Bills punched their ticket to the playoffs with their fourth straight victory last week, winning their first division title since 1995.

The division race might be over, but the Bills still have a No. 2 seed to play for — as if the opportunity to sweep the Patriots wasn’t enough motivation.

There’s no surprise when it comes to the point spread Monday night, as online sportsbooks favor the Bills by 7 points. The spread opened Bills -6.5 at the beginning of Week 16, but oddsmakers quickly adjusted a half-point. As of Monday morning, 78% of spread money is behind the Bills, and 81% of Over/Under action is on Under 46.5 points, according to our friends at Scores and Odds.

The Bills got the best of the Patriots in their first meeting, but only barely. As he so often does with young quarterbacks, Belichick disrupted Josh Allen, holding him to 154 yards, 0 touchdowns, and one interception on 11-of-18 passing.

To Run or Pass?

Curiously, the Bills didn’t allow Allen to sling the football in his first meeting with the Patriots the way they have against most teams in 2020. His 18 attempts were by far the fewest all season, as Sean McDermott turned to the run for 38-of-56 of the Bills’ offensive plays. They got the W, nonetheless, so it’s tough to say whether running the ball was the reason they won the game or if running it too much was the reason why the game was so close in the first place. Remember, the Bills entered Week 16 ranking 2nd in passing yards but only 21st in rushing yards.

The Patriots have consistently been one of the worst run defenses in the league this season, most recently putting their weakness on display in Week 15 as they allowed the Dolphins to rack up 250 yards on the ground. Considering the Patriots defense has allowed the second-highest rush success rate, it won’t be shocking to see both Zack Moss and Devin Singletary get their fair share of work tonight.

Another open question heading into Monday Night Football is whether the Patriots will see what they have in another Auburn quarterback product, Jarrett Stidham. Doing makes plenty of sense:

Belichick was typically vague when asked about his quarterbacks earlier this week, telling reporters, “we’ll see.” Stidham hasn’t been on the field much, throwing three interceptions on merely 33 pass attempts this season. Still, there’s no harm in seeing a bit more of him, and I fully expect Belichick to take the opportunity to do so over the next couple of weeks. However, it looks as if Newton will get the start against the Bills, but uncertainty regarding the quarterback situation in New England remains.

Public bettors are flocking towards the Bills, and understandably so. The Patriots technically having nothing to play for, and the fact that the Bills seek their fifth straight victory and have won seven of their last eight games do not make betting on the Patriots an easy endeavor.

However, if there’s any coaching staff that will prepare for this week just as they would any other, I suspect it would be Belichick’s. Though much of home-field advantage has been nullified in 2020, I won’t be laying seven points at Foxborough. My lean is with the Bills, but admittedly, my arm may need a twist or two before I lock in my bet.

For the time being, I’m betting Under 46.5 points. As I pointed out earlier in this article, it would be no surprise if the Bills attack the Patriots with a heavy dose of running plays, just as they did in their first meeting. Only the Jets and Giants average fewer touchdowns per game this season than the Patriots (1.9); so, whether it’s Newton and Stidham behind center, I’m not particularly scared of New England’s offense.

Josh Allen Under 36.5 Pass Attempts (-125) – Allen will have to throw twice as many passes tonight as he did in his first game against the Patriots for this to go Over. If McDermott’s offensive game plan is similar to what it was the first go-around, then Under 36.5 pass attempts should be a good bet.

Cam Newton Under 25.5 Pass Attempts (-115) – I think we see Stidham in this game, and even if not, Newton averages just under 25.5 attempts per game and the Bills have been vulnerable against the run. All of these factors considered, Under is the right side.