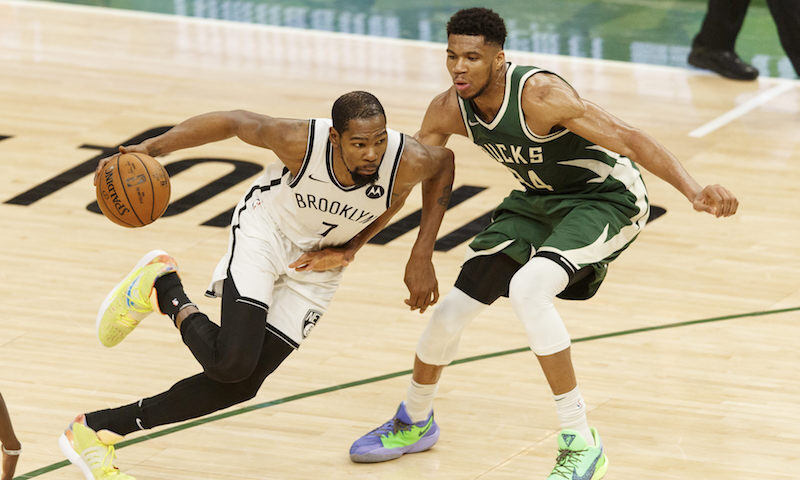 The second round of the NBA Playoffs are coming to a close, and on Saturday night, either the Brooklyn Nets or Milwaukee Bucks will punch their ticket to the Eastern Conference Finals.

The Nets, with the benefit of home-court advantage, jumped to a commanding 2-0 two weeks ago . But since then, the series has gone back and forth, as Giannis Antetoukounmpo and Kevin Durant, both former MVPs, have been busy trading jabs.

The Bucks took games 3 and 4 at home, and then the Nets came right back to take a 3-2 lead at the Barclays Center. The home team would be victorious in Game 6, too, as the Bucks were in control from start to finish during their 15-point victory in Milwaukee.

With Game 7 awaiting, one of these two heavyweights will inevitably deliver a knock-out punch. The question, though, is who?

If the previous Bucks-Nets games are any indication, it will be the home team, in this case, the Brooklyn Nets, who live to play another day and extend their playoff life.

So far, the home team has walked away with the outright victory in every game, and bettors backing the home team have cashed against the spread each time except in Game 3, which was a push for most NBA bettors.

Oddsmakers agree, predicting a one-point victory for the Nets. The Nets are 1-point favorites at BetMGM Sportsbook with fewer than 24 hours before Game 7 tips off. That’s quite an adjustment our friends behind the counter decided to make after Game 5, when the Nets were 2.5-point home underdogs in James Harden return to battlefield.

Though Harden was a non-factor in his first game back after exiting with a hamstring injury within a minute of the series tipping off, the Nets won 114-108 behind Kevin Durant legendary 49-point performance. Durant was remarkable from start to finish, from one end of the court to the other, playing every second of every minute of all every quarter. On top of his 49 points, Durant grabbed 17 rebounds and dished 10 assists en route to arguably the best game of his career. If the Nets go on to the Eastern Conference Finals and then win the NBA Finals, Durant’s Game 5 will be talked about for years. Chapters will be written, posters printed, and NFTs created.

While Durant recorded a double-double in Game 6 (32 points and 11 rebounds), the home crowd was too much for the Nets to overcome. Harden even played better, making 3-of-6 three-pointers en route to 16 points and seven assists, but Durant couldn’t find help elsewhere.

An injury to Kyrie Irving has left the Nets offense looking befuddled when the ball isn’t in Durant’s hands. Joe Harris, who led the NBA in regular-season three-point efficiency (47.5%), has gone cold in the Eastern Conference semis. He hasn’t reached double-digit points since Game 2, making multiple three-points only once in Games 3-6.

While Jeff Green helped Durant lead the Nets to a win on Tuesday with 27 points, he mimicked Harris on Thursday, shooting one-of-four from the arc and scoring merely five points.

Unfortunately for the Nets, Irving has been ruled out again for Game 7. Will Harris, Green, Blake Griffin and others from the Nets supporting cast provide sufficient help for Durant to lead the Nets to a series-clinching victory?

I had my doubts about Harden a couple of days ago, but he mostly proved me wrong. The former MVP looked much healthier than he did in his first game back. Though he didn’t have it in him to lead a fastbreak after a stolen ball, he was clearly more comfortable shooting the ball, especially outside.

A 20-point performance from The Beard would do wonders, as I predict Durant to deliver yet another legendary performance. Remember, before Game 6, the Nets were a dominant 8-2 against the spread during the playoffs. Even though the Nets are small favorites Saturday night, I still think oddsmakers are underestimating KD & Co.