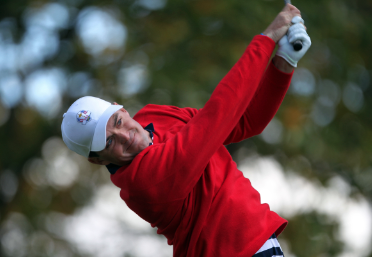 The blog picks turned out pretty decent last week. I went 3 for 3 in made cuts, but it was disappointing to see Ian Poulter as my top pick only finish T37. de Jonge was a good value play (but it seems like everyone had him and Horschel) and Ryan Palmer turned out to be a risky reward finishing T15. I was dead wrong about Padraig Harrington though as he had a solid week. All in all it was a good week, but I am finally ready to start playing more games.

As always, the year’s first major will be held in Augusta, Georgia at the legendary Augusta National Golf Club. It will be playing 7,435 yards to a par 72. Bubba Watson is the defending champion as he outlasted Louie Oosthuizen in a two-hole playoff last year.

The thing that makes the Masters a great tournament for everyone to get involved in fantasy golf is the field being so weak and small. There are only 93 people teeing it up (Darren Clarke withdrew) and about 20 don’t have a realistic chance of contending. I’m sure some of them will make the cut, but then you have to worry about them possibly shooting high 70s or low 80s on Saturday and/or Sunday. This will leave about 70-75 golfers with 44 and ties plus those within 10 strokes of the lead making the weekend. It is important to note that looking at previous cuts made at the Masters might not be the greatest stat for this reason.
The weather always plays a role in majors but with Augusta’s sub air system, it is less of a factor. They can control the rain water and drain excess easily. The most important weather factor this week will be the wind. Golfers will be practicing with a south wind on Tuesday and Wednesday. It will continue that direction on Thursday, but Friday it is suppose to change and blow WSW at 16mph. That could be a huge change on Amen Corner as players fight to make the cut. As of now, if you are on the fence about two or more golfers, it might be beneficial to take the ones with the late/early tee times on Thursday/Friday. We all know how much the forecast can change though, so I’d take a look at this one last time Wednesday night or Thursday morning before they tee off.

Brandt Snedeker ($18,017): Noone started the year hotter than Brandt Snedeker finishing in the top three 4 out of 5 tournaments including a win at the AT&T Pebble Beach Pro-Am. However, since his injury, he has two missed cuts with a 76-76 at the Arnold Palmer Invitational followed by a 74-71 at the Houston Open. He had an emotional press conference following his loss a few years ago at the Masters, so you have to root for him to be back in contention, but it’s just too risky to place him in a lineup right now.

Keegan Bradley ($19,197): I couldn’t decide between Matt Kuchar and Keegan Bradley in this spot. Kuchar has the track record here but I went with Bradley (although I might fit both in my lineup). Bradley has only missed 1 cut this year and has finished in the top 10 in his last 4 consecutive events leading into the Masters. Bradley finished T27 here last year. He’s 9th in all around ranking and 8th in total driving. If he gets a hot putter, I look for him to contend.

Ian Poulter ($17,210): I went over Poulter’s impressive year last week. However, his performance at the Texas Open was his worst of the year (T37) and his ball striking was not on form. I’m pretty worried about that, but his record at the Masters is impressive. It includes 2 top 10s in the last 3 years and numerous other top 30 finishes. At this price, I am giving him a shot. It is only a matter of time before he breaks out.

Fred Couples ($13,701): Couples always seems to find a way to make noise at Augusta. His course knowledge and management is exceptional. If you glance at his price here, it’s way too low. Look at these stats: 2012 (T12), 2011 (T15), and 2010 (6th). For some reason, I still don’t trust him enough to put in my double up leagues. He has only played 4 events coming into the Masters, only one of which was on the PGA Tour. That isn’t very unusual for him, but it is his lowest tournament total leading up to the Masters in recent history. You always have to wonder how his back is holding up. For this reason, I’d think about sticking him in GPP leagues but it may be a bit risky to put him in a double up or heads up match.

Golfers #73-94 on Draftstreet: Good luck trying to find which one or two will make the cut. If I had to pick a couple to play the weekend, I’d say Jamie Donaldson and a longshot on Nathan Smith, the Mid-Amateur Champion, who has played on this stage before.