DFS Growth: A Look at the FanDuel Slam

I started playing daily fantasy sports last season, and I started in the NBA. In the past year, the growth of this industry has astounded me. It’s hard not to remain optimistic when we look at where NBA DFS is now versus where it was a season ago.

The $25 tournament seems to be the “sweet spot”, so let’s look at how the Slam on FanDuel has grown from the start of 2014 compared to the beginning of 2015. 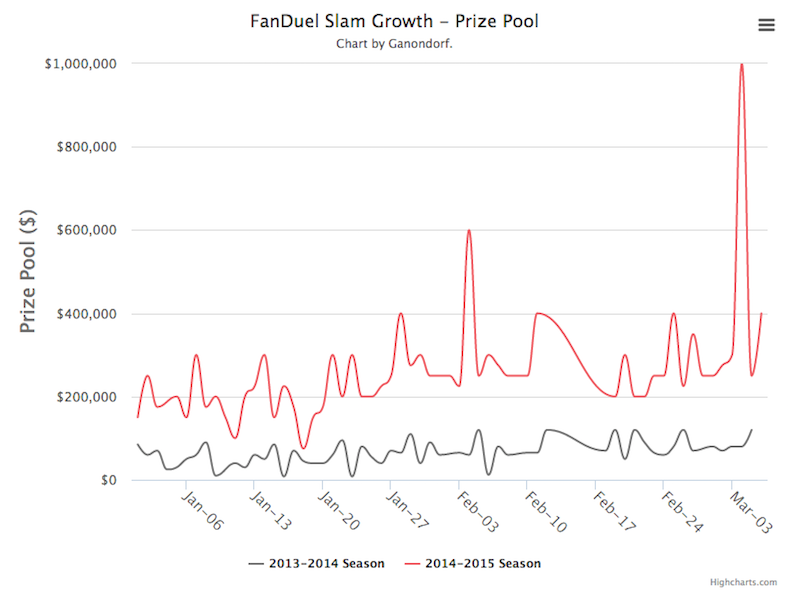 The Slam is one of my favorite tournaments for a lot of reasons. I regularly argue for flat payout structures. The Slam’s top prize is regularly around 10% of the prize pool. This season FanDuel made one other significant change to the Slam that makes it even better. Here’s a comparison of the payout structures between the MEGA Slam and Super Slam. 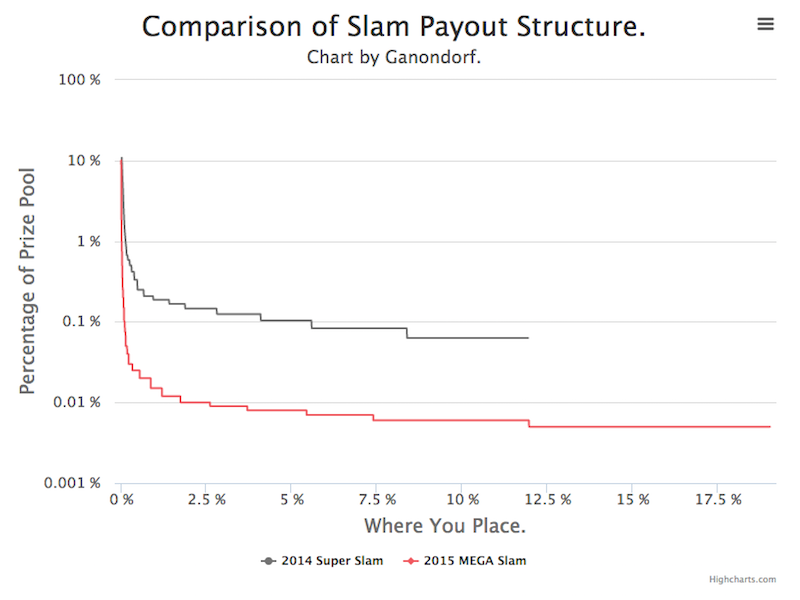 As before, I’ve represented the percentage of the prize pool in a log rhythmic fashion, so each change is an order of magnitude higher.

Last year the Slam typically paid out the top ten percent of the entries. This season, it’s been stretched to around the top 19 percent.

This is huge. Win, and you can get $20,000 or more (like the $100,000 doctorphelps took down yesterday), but finish in the top 19% and get double your entry back. As a fan of flat payout structures, I couldn’t be more elated with this tournament with this structure performing so well.

I’d be remiss if I didn’t address another thing that’s grown. In 2014, the Slam’s rake was typically around 10.5%, but this season it’s been consistently at 13%. Also, overlay seems to be a thing of the past for the Slam. A few days in the new year, the Slam didn’t completely fill, but since then it’s been an unstoppable behemoth.

Currently, the tradeoffs are worth it. With more of the field being paid out and the rapid growth, it’s a much better tournament than last year. I wouldn’t worry the sky is falling just yet, but I’m hoping the rake increase doesn’t continue next season. Of course, I’m hoping the growth does.

DFS is blowing up. A million dollar prize pool at a low price point in the NBA is an important milestone for the industry. In DFS, anyone can win, and more and more people are playing. We can only wonder how many six-figure winners we’ll have in the next year.