Every Tuesday and Thursday I am going to give you my top tournament plays for all Daily Fantasy Hockey GPPs (guaranteed prize pool). GPPs are a general term used across the industry for your big money tournaments.

GPPs are very different from your cash games and you use a different strategy with them. In our GPPs we are not interested in safe plays, as GPPs are all about UPSIDE. We want players who can explode, those all-or-nothing type players who can become GPP gold, and your value players are just as important as your star players. You need your players to have huge nights in order to take down these big tournaments.

My goal is to provide players who will be under-owned and have that big game upside you are looking for. I will also try to find as much value as I possibly can. Now, let’s get to the NHL GPP Plays!

Win one of SIX $535 seats for a FanDuel WFBBC qualifier in tonight’s NHL freeroll! Click to learn more. 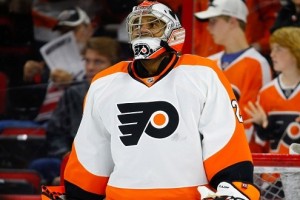 Ray Emery, Philadelphia Flyers – Emery has played very well in two of his last three starts and is very inexpensive across the industry. The Flyers are not a strong defensive team, which means Emery is likely to see a lot of shots and if he is on his game, that means big fantasy points for his owners. It is never easy to roster a goalie like Emery, but you can load up your team with studs with the salary you save. Philadelphia is a decent sized favorite tonight and I think Emery makes a great roll of the dice.

Mike Fisher & Mike Ribeiro, Nashville Predators – Mike Fisher has 9 goals and 17 points in his last 20 games and is currently centering the Predators’ number one powerplay unit. Mike Ribeiro has very quietly put together a solid season for the Nashville and Centers their top line. San Jose has allowed 29 goals in their eight February games (3.63 goals per game), which is more than any other team in the NHL this month. Nashville has scored the sixth-most goals in the NHL this season and have the league’s best record on home ice (24-3-1). Neither of Fisher or Ribeiro are likely to be highly owned tonight and both have the big game upside you are looking for. 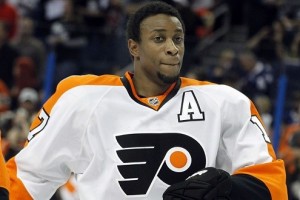 Wayne Simmonds, Philadelphia Flyers – Simmonds is riding a four game point streak, producing three goals and six points along the way. Simmonds is a very streaky scorer and when he is hot, you want to jump on board. Simmonds skates on the Flyers’ second line, but plays on their top powerplay unit. The Blue Jackets remain one the NHL’s weaker defensive teams, allowing the third-most shots per game (33.1) and the fifth-most goals per game (3.13). Columbus is not getting solid goaltending these days and they desperately miss Sergei Bobrovsky. Look for Simmonds to bury at least one powerplay goal tonight.

Andre Burakovsky, Washington Capitals – Burakovksy had a huge game versus the Ducks on Sunday night, registering two goals, a plus two rating and four shots on goal. The 20-year-old Austrian is very gifted offensively and is now back on the Capitals’ top line with Nicklas Backstrom and Alexander Ovechkin. Burakovsky is dirt cheap and just might be the best GPP bargain out there tonight.

Steve Bernier, New Jersey Devils – Bernier sniped a goal against the Nashville Predators and will look to stay hot tonight versus the pitiful Buffalo Sabres. Bernier is currently playing on the Devils’ top line and number one powerplay unit. The Sabres are the league’s worst defensive team, ranking dead last in both shots allowed (34.7) and goals against per game (3.43) this season. Bernier won’t be in a better situation to produce the rest of the season. 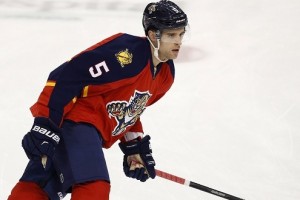 Aaron Ekblad, Florida Panthers – The Maple Leafs have now lost 14 of their past 15 games and have given up on the season. Toronto ranks near the bottom of the league in every defensive category and will be a team to target against for the rest of the season. Ekblad logs a ton of ice time and is the Panthers’ powerplay quarterback. Florida is not known for their offense, but I think they can score three or more in Toronto tonight and I expect Ekblad to be heavily involved in their attack.

Eric Gelinas, New Jersey Devils – If you are looking for another defenseman with upside who will be under-owned, have a peak at Eric Gelinas. Buffalo is easily the worst team in hockey and even the offensively challenged Devils can score a few goals against them tonight. Gelinas is the Devils’ powerplay quarterback and he has big game upside against the dreadful Sabres tonight.