With NFL just a few days away, there is still time to invest in football cards before fans start day trading them. I feel that when the season starts, the fantasy crowd who are used to researching players intensely on a week-to-week basis will put similar energy into investing in football cards. It will be interesting to see how it plays out, but I have a feeling there will be good opportunity to make a nice return flipping cards as the season goes on. Today I’m going to dig for value among some of the starting Quarterbacks who are in upside situations which may not be reflected in their card prices.

Deshaun Watson – Watson finds himself in a situation that does not necessarily scream “upside”. He lost his best receiver, he doesn’t have the best coaching, and his team has a lousy defense which will make it difficult to win games. But all this means Watson is going to need to put up stats to keep his team competitive, and those stats will get fantasy players excited and generate some buzz for Watson. Watson’s Optic Holo PSA 10 cards have been underperforming relative to Dak Prescott who we’ve used as a comp to Watson in the past. Prescott’s cards recently caught up to Watson in price (about $700 most recently) and I believe the two players have room to run as they target the price of Lamar Jackson’s Optic Holo PSA 10 cards most recently selling for $1,900. While Jackson had an outstanding year last year, Dak and Watson have strung together several great seasons each and there is a lot of ground to make up to catch Lamar’s current value. I could see them each easily doubling during the season and recently bought Deshaun Watson’s card. Don’t sleep on their Prizm cards either. 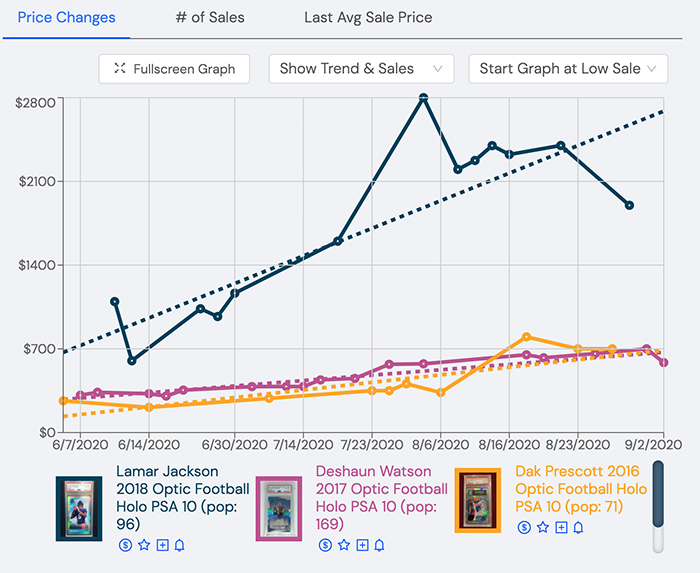 Baker Mayfield – I’ve recommended Mayfield in the past and still believe he’s undervalued. Just look at the value of his Prizm PSA 10 card vs Daniel Jones. I would argue that Mayfield is the better quarterback and has much more upside, yet his card is tracking similarly to Jones. Mayfield’s Browns have a much better schedule than last year, a better coaching staff and his top weapon, Odell Beckham Jr, is healthy this year. Don’t be surprised to see the Browns contending for the playoffs as the season winds down and Baker having a bounceback season to help drive his prices higher. 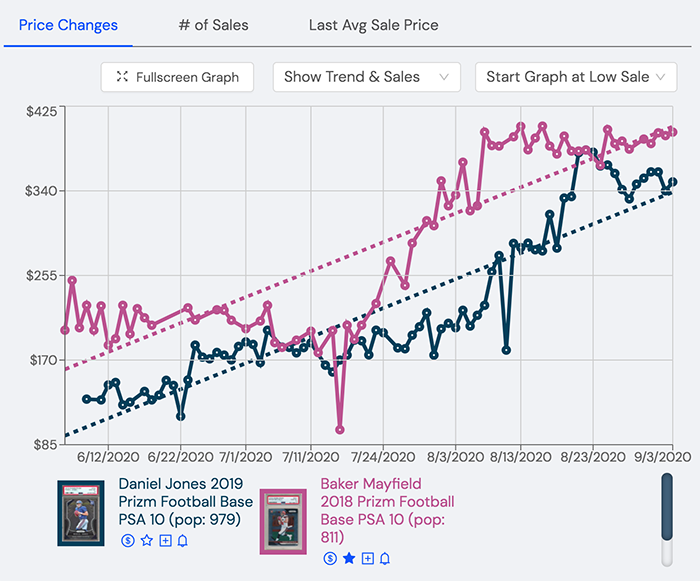 Teddy Bridgewater – I’m a bigger fan of Phillip Walker when it comes to Panthers QBs but, for now at least, Bridgewater has been given the opportunity to helm an offense loaded with weapons. Between Christian McCaffrey, DJ Moore, Curtis Samuel and now Robby Anderson, Bridgewater has plenty of targets and if he shows the same competence he displayed when he took over for Drew Brees last season, Teddy should be set up for a nice season. The cards market does not reflect this potential as Bridgewater’s 2014 Topps Chrome PSA 10 cards are underperforming both Dwayne Haskins’ and Gardner Minshew’s 2019 Prizm Base PSA 10 cards. I think Teddy’s rookie is a pretty safe buy right now at just $120 and I wouldn’t be afraid to buy Phillip Walker who I believe will ultimately end up as #2 on the depth chart and whose cards are much harder to find. Walker’s Unparalleled cards are currently going for about $30 raw. 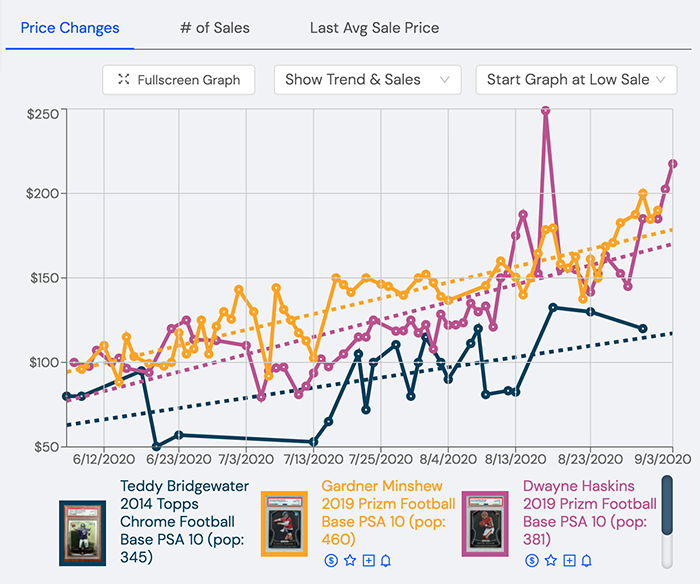