Hello Daily Fantasy Sports fans! Welcome to this week’s edition of the Weekly Rankings Update. It’s Championship Week! The week before the greatest two days in sports, the Thursday and Friday of the NCAA Tournament (Not sure what they call it now. 2nd round? 3rd round? I’ll just call it the Round of 64). I for one always try to make sure I’m off work for those two days, because I know I wouldn’t do any work anyway. So it’s a win-win for everyone. For today’s update we’re going to look back at some of those great moments in conference championships.

LADIES AND GENTLEMAN! CB35 HAS FINALLY CRACKED THE TOP 100!!!

McJester has slightly extended his lead over Troll4MVP this week. Troll is in the final ten of the DSBBC this week. Depending on his finish, that may be enough to jump McJester for first place. The biggest mover of the week is draftcheat who storms into 8th place.

The TPOY is a long battle. Much like the Syracuse vs. UConn 6 OT thriller in the Garden in 2009. The second longest game in NCAA history ended with the Orange on top 127-117. 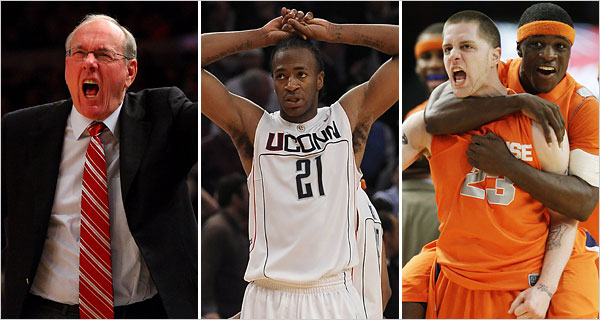 Not a lot of movement in the NBA Leaderboard this week. The biggest newcomer is a25smith who vaults into 18th place.

The first of two ACC games to make an appearance here. The 1989 trilogy between Duke and North Carolina was highlighted by both teams winning on the road. The Danny Ferry led Blue Devils took on JR Reid and the Tar Heels in a classic contest that ended with UNC scraping by with a 77-74 victory. Duke ended up advancing to the Final 4 while UNC bowed out to eventual champion Michigan. ehafner has moved back into first place in the NHL Leaderboard jumping back over lowkey. There was a lot of shuffling in the NHL standings from the Big Score two weeks ago on Thursday.

The second ACC game to get mentioned here is the 1974 ACC Championship game between NC State and Maryland. NC State was led by possibly the best ACC Player of all time, David Thompson. Maryland was led by Len Elmore and John Lucas. The teams were ranked #1 and #3 in the country in a time when only one team per conference went to the NCAA Tournament. NC State prevailed 103-100 and went on to win the National Title. But everyone knows the real national title game was the ACC Championship.

ehafner and dinkpiece moved up to second and third this week behind Condia. We’re halfway through the month and could see a lot of action with the big NBA and NCAA tournaments here towards the end of March.

The 1995 SEC Championship game had all the makings of an historic tilt. Two legendary coaches in Rick Pitino and Nolan Richardson. Great players in Antoine Walker, Tony Delk and Corliss Williamson. The teams came into the Georgia Dome ranked #3 and #5 respectively. In the end led by 23 points from Walker, the Wildcats snuck by in OT with a 95-93 victory.

Congratulations to those Grinders who are excelling in all facets of our leaderboards.

After much discussion (consulting myself), the new gif of the week girl is officially Sofia Vergara. You’re welcome gentleman.