If you missed the 2020 Millionaire Maker Top 10 recap, you can catch up here. Since we are now five weeks into the 2021 season, it’s time to start looking at this year to see if there are any trends we can take advantage of, and also discuss ownership trends historically once bye weeks start hitting.

Below is a chart showing which versions of Team or Game Stacks have appeared in Top 10 lineups through Week 5. 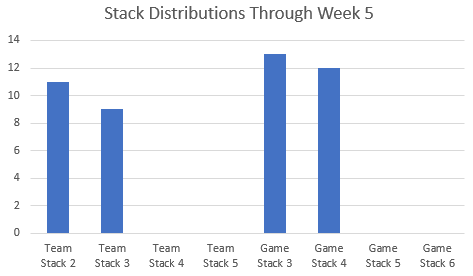 Game stacks were absolutely dominating amongst the Top 10 lineups last season, but so far have just a slight advantage over team stacks. We haven’t really had many back-and-forth shootout-type games this season except for the Browns and Chargers last week, which seems to be the main reason that game stacks haven’t been appearing as often as last season. It’s still a good idea to have some variation in the types of teams you make for the ultra large-field tournaments like the Millionaire Maker and not just blindly make 4-man game stacks for every team. With only four types of stacks showing up in the Top 10 through five weeks, making a team that is based on a stack not shown here is a longshot. Stick to what actually works and makes it to the top of tournaments.

Below is a graph of how many times each position has shown up in the flex spot over the first five weeks. 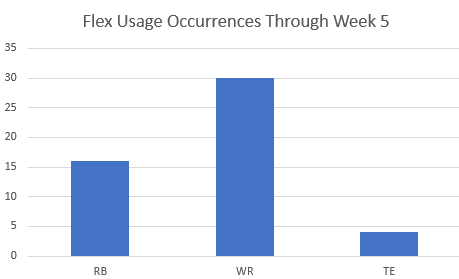 It seems that the field has reached what I would consider to be a near-optimal rate of usage of WRs in the flex. The one spot the field still gets wrong is the usage of TEs in the flex. This has been a long-term losing proposition year after year among Top 10 lineups and generally you would be better off simply eliminating using a TE in the flex in the ultra large-field GPPs across the industry.

— DraftKings is doing a better job pricing than previous seasons, creating a flatter pricing structure without missing on too many injuries when they make salaries.

— We also made some pretty poor choices on player selection. This happens every year, however it was noticeable in the first two weeks of the season.

I also want to show you what has happened over the past few seasons in terms of AO when the bye weeks start hitting. Over the first few weeks when there are more games, the AO tends to be lower as there are more players to choose from. Once the bye weeks start hitting the AO of Top 10 lineups tends to move up rather dramatically. Here is some data on those.

If you use AO at all in LineupHQ or in your head when making lineups in these large field GPPs, make sure to adjust the number up during the bye weeks as it’s just fine to have more total ownership in your lineups.

Below is a chart of Bust Rates of the three highest owned players at each position through the first five weeks of the season. There is no real formula I use for these, and are based on my opinion if that particular player had a performance that was giving you a shot at a good-to-great lineup that week. 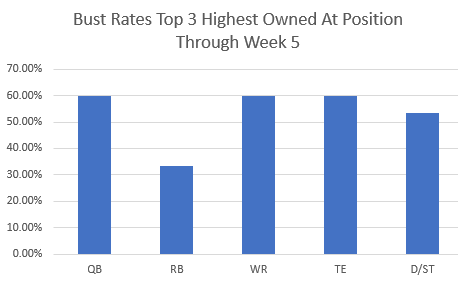 Outside of the RB position in which we have become much better at predicting strong performances over the years, the general trend of missing on 50-60% of the highest owned plays every week across positions has remained rather steady to start the season. This differs from last season when we were much better at predicting QB performances, which seems to be tied to the increase in scoring last season due to no fans in the stands and a downtrend in offensive holding penalties during the 2020 season. Scoring is down almost two points per game this season while holding penalties have increased to a more normalized level. The lower scoring environment has now put QB bust rates back into historical levels of the 2018-2019 seasons. Since we are now missing on a good amount of highly owned QBs, we are also back to missing on 60% of the highest owned WRs every week, which also has returned to normal levels after missing on them just 43% of the time last season.

That does it for this week’s recap of the 2021 season. I’ll be back after Week 7 with an update on what is happening to start the bye-week portion of the 2021 season. Don’t forget that while this article looks specifically at the largest field Millionaire Maker on DraftKings, the information here is easily transferable to many of the mega field contests on DraftKings for NFL and even other sites across the industry.

If you missed the 2020 Millionaire Maker Top 10 recap, you can catch up here, but since we are now five weeks into the 2021 season it’s time to start looking at this year to see if there are any trends we can take advantage of, and also discuss ownership trends historically once bye weeks start hitting.

Below is a chart showing which versions of Team or Game Stacks have appeared in Top 10 lineups through Week 5.