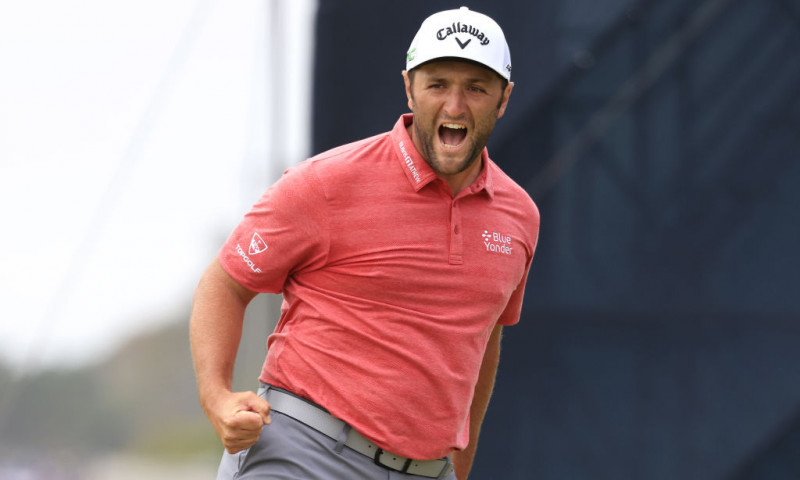 The Open Championship, also known as the British Open, returns to the calendar and will be the final leg of this year’s four majors. It’s only Monday and there are already a handful of storylines for bettors to keep tabs on. From withdrawals, course fit, and weather, here’s what you need to know while perusing 2021 Open Championship odds and golf betting picks for Royal St. George’s.

Open Championship odds are courtesy of BetMGM unless stated otherwise.

The newest major champion, Jon Rahm (+700), is no stranger to links golf. Aside from being arguably the best player in the world (ranked No. 2 behind Dustin Johnson), it’s one of the reasons he’s such a short favorite to win at Royal St. George’s.

Rahm took his time to celebrate after winning the U.S. Open, but he didn’t skip a beat last week in Scotland. There he finished 7th in the Scottish Open, starting with rounds of 66 and 65 before “falling off” with a 69 and 68. Looking at the stats, it’s easy to see why Rahm has been so successful in his short career. The Spaniard ranks 3rd in strokes gained ball-striking and strokes gained off off-the-tee this year. He’s also top-20 in strokes gained approach.

There’s an Atlantic-sized gap between Rahm and who oddsmakers project as his closest competition. While Rahm is the favorite at +700, four-time major champion Brooks Koepka enters with +1400 odds at BetMGM Sportsbook.

Koepka has three top-fives in his last three tournaments. He rebounded from a missed cut at the Masters by finishing T2 and T4, respectively, at the PGA Championship and U.S. Open. He even decided to play well in a non-major with a T5 at the Travelers Championship. Beginning his career across the pond and missing only one cut at The Open Championship, he clearly doesn’t mind playing links-style golf. The big hitter has three top-10s at The Open, including a 4th-place finish in 2019.

Not far behind sit Dustin Johnson and Rory McIlroy, both at +1600, followed by Jordan Spieth, Justin Thomas, and Xander Schauffele at +1800. Louis Oosthuizen is as short as +2500 after consecutive runner-ups at the PGA Championship and U.S. Open. The South African looks to win his second major, the first of which came 11 years ago at this very tournament.

Then there’s Bryson DeChambeau, who has fallen to +2800. The betting market doesn’t believe his game will translate well at Royal St. George’s, and it might be right. DeChambeau is only two-for-three in made cuts at The Open, and recently missed the cut at the Rocket Mortgage after an impromptu divorce from his caddie. We have yet to see Bulky Bryson try to tackle an Open venue, but comments from the past suggest he might flat, particularly if the wind howls as it so often does just that in the UK. Not exactly the best conditions for someone who hits the ball as high as DeChambeau. On the other hand, if conditions somehow stay benign, he could take advantage of the course’s relatively short par 4s with aggressive lines from the tee box.

With the fairways hell to hit, bunkers dangerously deep, and the weather wild, Royal St. George’s Golf Clubs is as demanding of a British Open venue as they come.

Per usual this time of year, keep an eye on Kevin Roth’s golf weather report throughout the week before betting on The Open. In the past, golfers have been drawing dead just based on their tee times. It’s a difficult task to predict weather, even a couple of days before the tournament begins. Still, we might be able to eliminate a sizable portion of the field from our betting card before the tournament starts if we stay on top of the forecast and ahead of the market.

With that said, it’s obviously difficult to make Open Championship picks this early, but we’ll do our best. I’m sticking to longshots for now, as I prefer to say away from shorter odds until there’s more clarity regarding the weather. For more Open Championship tips, check out this British Open Betting Guide.

Garrick Higgo +8000 – Higgo dominated overseas before winning his first U.S.-based event last month. He’s only 22 and already has four professional wins between the European Tour and PGA Tour. He fell into a slump after his Palmetto Championship victory, but the kid is a proven winner and is talented enough to become a household name eventually. An encouraging sign this week is his accuracy from 100-yards and in, a key distance for Royal St. George’s and in typical Open Championship weather.

Guido Migliozzi +12500 – Somewhat similar to Higgo, Migliozzi had success on the European Tour before finding the top of the leaderboard in the U.S.. His Euro victories, both in 2019, go further back than Higgo’s, but he had consecutive runner-ups at the British Masters and HimmerLand leading up to his T4 coming out party at Torrey Pines. He’s stayed in decent form following his impressive U.S. debut, finishing T13 at the Travelers and T35 at the Scottish Open.

Stewart Cink +15000 – If you’re a regular reader of his column, you know I love some Stewart Cink. Recently joined by Patrick Cantlay and Jason Kokrak, Cink is one of four golfers, including DeChambeau, to win multiple PGA Tour events this season. The 47-year-old has revived his career in 2021, 12 years after his first and only major championship. The major? The one that awaits him and 155 other golfers this week. Cink has kept up with the young guys by adding distance off the tee and sharpening his approach shot. Even before his swing makeover, he had three top-25 finishes at the Open Championship between 2015-2019. I love Cink again ahead of this year’s Open at Royal St. George’s.