I am sad to say after this article, there will not be another one for eight months, and even though many people haven’t realized this yet, college football is great fun with crazy scoring. If you like fantasy NFL and haven’t tried the college level yet, you have no idea what you are missing. But enough of the boring intro stuff, let’s get down to the meat and potatoes of why we are writing and reading this article.

This article will focus on the DraftKings Cash Bowl pricing. As I am writing this article, I am thinking that the entries are way too low with only a day and a half to go, so dig into those deep pockets and enter a lineup or two. This game set follows most of the basic rules we’ve been discussing all season in our strategy articles. Nine of the eleven players I am writing up in this article are from the three highest O/U games in this slate. One team has my #1 play at each position so obviously I see that game’s score getting high in a hurry. While I love all the plays from Florida State, I can’t recommend playing them all on the same team.

With that here are my last plays of the year for you guys. 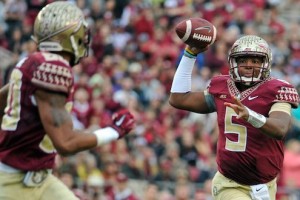 Jameis Winston (Florida St) – Winston hasn’t been near as good this year as last, but you can’t help but play him for his price. He will be the highest owned player in the tournament so you need to play him if you are trying to just cash. However, he is a fade if you’re trying to win this thing (and actually think he might have a bad game) but I only recommend this if you are playing at least three lineups. Florida St should be able to score with Oregon and they will be the highest owned players for good reason. I will play Winston in all my cash games and at least half of my GPPs.

Nick Marshall (Auburn) – Marshall is a great dual-threat QB and the price is right for him. He hasn’t had a rushing TD in the last three games and I am hoping that scares some people off. He had 9 rushing TDs in the four games previous to this TD slump to end the year. Lots of stats tell you to stay away from the Wisconsin defense, but I think that has more to do with the Big Ten offenses being weak than the fact they are actually a team to be scared of. Every one of my teams will have one of the two guys I just wrote about and most will have both of them.

Jake Waters (Kansas St) – While Waters doesn’t have the running skills of Marshall or the passing skills of Winston, he has to ability to throw for 400 or run for 100 where the others guys don’t have both those abilities. He has one of the best WRs in all of college football to throw the ball to in Tyler Lockett. He also leads the team in rushing attempts and has eight rushing TDs, so they will lean heavy in him in the running game. The QBs are definitely the stars of both teams in this game and I can see them each taking the game over and putting up big games.

Dalvin Cook (Florida St) – Cook doesn’t sit atop of my overall RB rankings, but when you figure in price, he is hard to ignore. He has shown over the last two games with Karlos Williams hurt he could handle the full workload of a starting RB. He is much more explosive than Williams and I can’t see Florida St not giving Cook at least 75% of the carries in this one. He has shown serious ability over the past couple of games and the Seminoles are going to need that this week against a great offensive Oregon team. Cook almost has 400 total yards over his last two contests, and I see him getting around 150 in this one.

Cameron Artis-Payne (Auburn) – Artis-Payne is a play that doesn’t look that good on paper as the stats will say Wisconsin has a great run defense. I did not see that last game as Ohio St ran the ball all over Wisconsin. Auburn finds ways to run on almost everyone so don’t let the stats scare you off this pick. Artis-Payne only has two games all year with under 20 carries so the volume will be there. The only downside here is Marshall will vulture half of the rushing TDs for Auburn.

Royce Freeman (Oregon) – Freeman is one of those plays that gets you the second best player on the highest scoring team without having to break the bank. I love Marcus Mariota, but I just can’t pay that price to get him, you need exposure to Oregon and Freeman gives you the best bang for your buck. Freeman has 1300 yards and 18 TDs on the season but when you play with Mr. Mariota your stats tend to get overlooked. Mariota is just too expensive and the WRs are a crapshoot, so this is your exposure to Oregon this week.

Rashad Greene (Florida St) – Greene’s catches and yards are up there with the best of them, he just hasn’t been finding the end zone this year. He did score twice last game and I see Winston looking his way early and often against the Ducks. Oregon also lost their best cover corner, so that should make things a little easier for Greene. The DraftKings scoring is built for his game as he is a high volume receiver that usually goes over the 100-yard mark. He gives you the upside of the big two with a salary $3000 less. He is hard to get away from if you play Winston, so don’t over think this one and just pair them up. 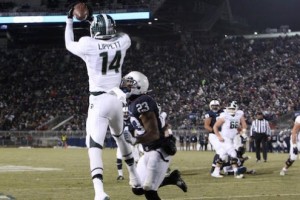 Tony Lippett (Michigan St) – Lippett is a big play receiver that has been slumping a little down the stretch. I am hoping that scares some people off him this week, but don’t let that be you. The matchup is just too good to ignore. A 70 point O/U is unheard of in a Michigan St game. I tend to trust Vegas more often than not and the Spartans haven’t had a game that even had a 60 point O/U this year, so the stats should be there this week. You are going to want exposure to this game and Lippett offers you a great option for a decent price.

Bud Sasser (Missouri) – I feel like a broken record when it comes to Sasser, but he just keeps producing yet his salary never moves much. He is a great cash game play and a good GPP play. In 13 games this year he has scored in double digits 11 times and went over 20 six times. I am a sucker for this guy, as he has made me a lot of money this year, but he will have a considerably lower ownership than the WRs priced right above him. This is your contrarian play for the week.

Nick O’Leary (Florida St) – I think this is a week to just bite the bullet and pay to get that production from your TE. O’Leary offers so much more upside than the others at the position he is worth the extra $1000-$1500 you need to pay. This has been very obvious in this article, but I love targeting Seminole players this week and O’Leary gives you two-score upside for a much lower salary than most players.

Josiah Price (Michigan St) – Price is the best option on the board if you don’t want to pony up the salary it takes to get O’Leary. Price doesn’t get you a ton of points with his receptions or yardage but I think he finds the end zone this week. If you TE scores a TD he pretty much has already hit value for the week and Price has the best chance among the cheap guys of doing that this week.