Last Friday evening, I was hanging out at the swim club my family belongs to.

A quick note on this “pool club,” lest you think I’ve got Musk money – there’s a pool and a “clubhouse” which is basically a bathroom and a cold water shower built during the Eisenhower administration. Dues are like $650 a year, a number I should know, as I’m actually the vice-president of this 150-family organization, but whatever. It’s a pool. We’re not fancy…

Anyway, it was a bright, sunny day, my kids were having fun, and I was doing adult things, which consisted of drinking a few beers, talking with my summer pool friends, and building DFS lineups for that evening and beyond.

For that day, there was plenty of MLB action. Plus, I entered a WNBA contest. Built some lineups for the final week of the USFL season. And, of course (of course!) I was checking out that night’s CFL showdown slate between the Winnipeg Blue Bombers and Ottawa Redblacks.

Sidebar: This is not a cry for help. I really enjoy following these leagues and trying to build winning lineups. I’m not pouring over spreadsheets or anything; I’ll check Twitter, listen to a podcast or two, whatever. Not a big deal, not a lot of cash, just let me enjoy building niche sport lineups, OK?

(That last bit may have been directed toward my wife and children).

So yes. It was glorious. Drink a beer, engage in some adult conversation (you know: inflation, special education, NFTs, normal stuff) and, in the spaces in-between, build some lineups. In total that day, I built eight lineups for action that Friday night. To be clear: This is not for big money. One WNBA lineup for $3 total, five MLB lineups for $20. No biggie.

Then there was the CFL showdown. I built two lineups, mostly the same except for one 1v1. I entered them into the ten-cent tournament, something I often do as a placeholder. I have never entered a ten-cent tournament and not gone back and re-entered the lineups into higher dollar contests. Sometimes, those higher dollar contests are $1; other times, they’re more. But again: I always go back and re-enter.

On this night, the game slated for a 7:30 p.m. kickoff. There was going to be overlay in the $1, $3, and $10 contests. So I decided to wait it out and hammer whichever had the most overlay, with the potential to enter all three if the math was right.

It was around 7 p.m. I sat down with a beer and started talking to my buddy Ken* (not real name), who is an active eBay’er. He has a bot that scans the internet for items he knows he can turn a profit on, the bot buys those products, and Ken sells them, easy peasy. He says he makes about $1,000 a month on this side hustle. 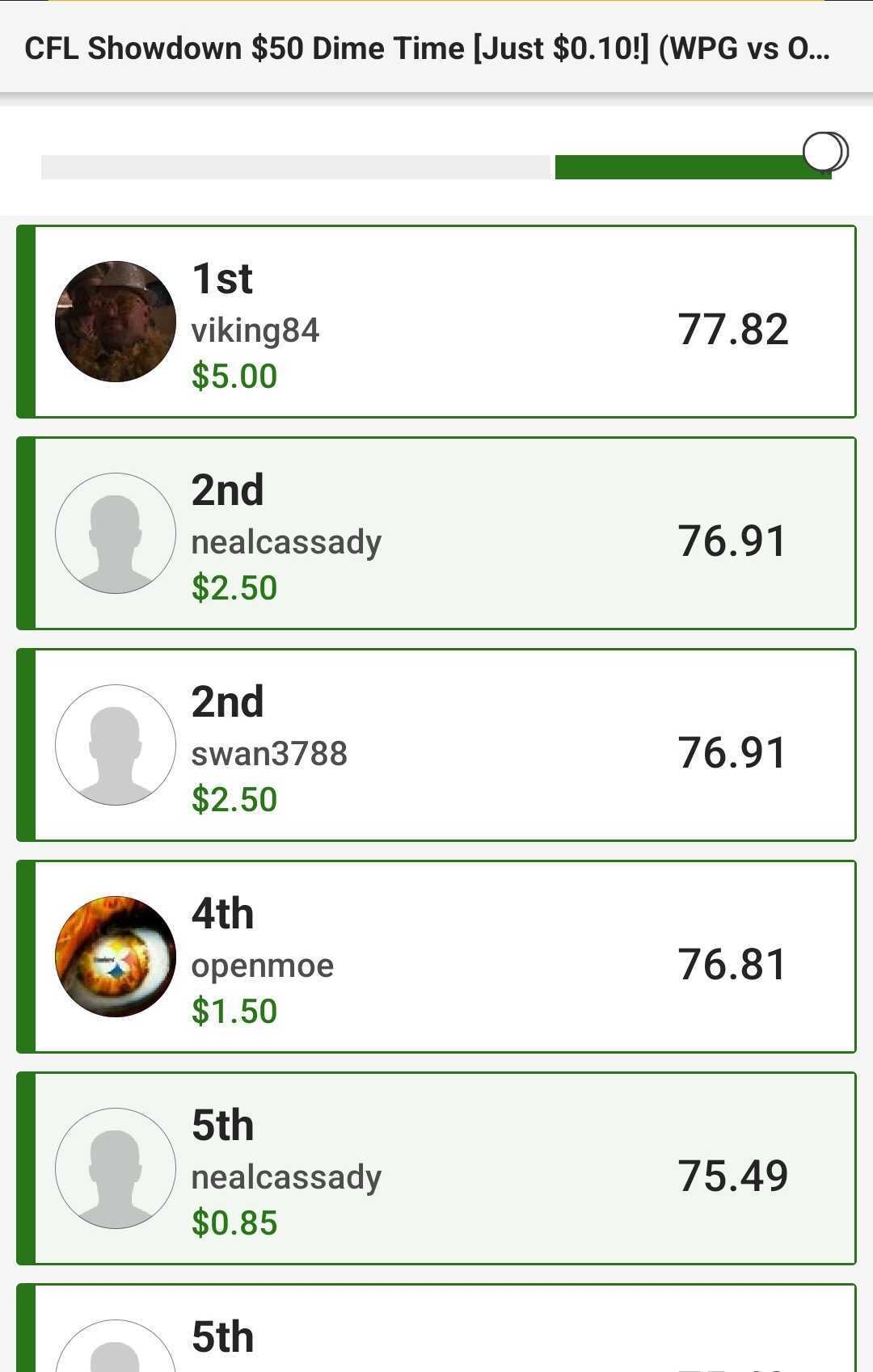 And he told me a story about how his bot accidentally just bought $20,000(!) worth of sneakers that he’s going to struggle to break even on. It was a riveting story. There may have been another beer. And all of a sudden my mind clicked and … showdown! Winnipeg! Ottawa! Blue Bombers! Redblacks! What time is it?!?

Of course – of course, of course, of course – I finished 2nd and 5th in these dime contests. I turned my 20 cents into $3.35. Some back of the envelope math shows if I put in another $28 in, my return would’ve been in the neighborhood of $475, maybe more, maybe less, certainly not life changing money, to be sure, but definitely enough to buy my beer for the rest of the summer at the pool.

Moral of the story: No more socializing while at social events. Obviously.