Well, the weather was spot on but the golf picks were mostly scattered. The only player that ridiculously bad was Bo Van Pelt who finished with an abysmal 76-76, missed cut. Boo Weekley made the cut and was looking pretty decent until a 76-77 over the weekend. Jimmy Walker managed to pull out a T8 while Vijay Singh and Josh Teater both made the cut as picks under $10k. While I said Singh and Teater were interchangeable, Teater ended up with the higher finish coming in at T27. Singh finished with a triple double but unfortunately, this isn’t basketball and +5 over the last two cost us a lot of fantasy points. I didn’t manage to place with the 3 lineups I entered in Draftstreet GPPs but had a very successful week at a different place. I’m still waiting until after the two Texas tournaments before I really start playing a lot of double ups and heads ups. This week will be another one where I just mix some lineups together and hope one gets lucky in the GPPs. 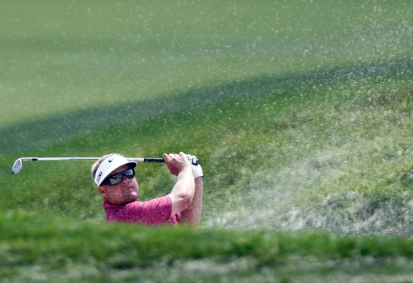 The PGA Tour heads to Humble, Texas for the Shell Houston Open this week. Playing at 7,457 yards and a par 72, it will serve as a final tune up for most of the golfers playing in the Masters in two weeks. Five of the top 10 in the World Golf Rankings will tee it up including defending champion Hunter Mahan, who finished with a -16, 272 total last year.
It doesn’t look like anything major is happening with the weather this week except a chance of isolated thunderstorms over the weekend. I think I will again skip the higher priced guys although after watching so many “experts” on ESPN fill out their NCAA brackets, I feel like I should write about everyone over $20,000 and when half of them finish in the top 20, brag about how well I did.

John Huh ($16,241): I’m not playing the odds when I am talking about fading a golfer that costs $16k and taking one that is under $9k, but so be it. Huh has missed 4 of his last 6 cuts but did finish with a T27 at the Arnold Palmer Invitational. However, that was after an 80 in the final round. His other “made cut” in this stretch was the WGC-Cadillac in which there is no cut. He did play well enough to make the cut had there been one, but he faltered on Sunday again with a 76. Huh finished well here last year but until he can put up four consistent rounds, I have to stay away.

Carl Pettersson ($14,754): Pettersson hasn’t had that good of a year and probably why his price is down a bit. He only has one Top 10 which was at the Tournament of Champions to open the year with the small field. He is, however, coming off a T21 at the Arnold Palmer Invitational where he never shot over par. Last year at the Houston Open, he fell just short of Mahan, finishing 2nd alone (and backing that up with a win at the Heritage). He didn’t play here in 2011, but finished T50 in 2010. For the small price tag, I think Pettersson has a lot of upside this week.

Michael Thompson ($14,205): I stayed away from Michael Thompson right after his win and he backed it up with a T8 at the WGC-Cadillac. I should have waited one more week as he missed the cut at the Tampa Bay Championship. He is coming off a week of rest which is always helpful, but the body of work for the whole year just isn’t there. He’s missed 4 of 7 cuts and that doesn’t include a T78 at the Farmers. I’d rather spend $500 more and get Pettersson this week.

J.J. Henry ($8,873): Call it a gut pick or whatever you want, but I think JJ Henry is great pick at this price. He has made 7 of 8 cuts this year with his last missed cut coming way back in January at the Sony Open in Hawaii. He does only have one Top 20 finish, but he puts up four scores routinely. Henry lives in Texas and went to school at TCU. He missed the cut here last year, but finished T19 in 2011, T25 in 2010 and T42 in 2009. I’m not saying to expect a Top 10 performance, but he might be just the person to open up salary space in your lineup.