Aside from Tim Clark’s 2nd round 79 and therefore missed cut, it was a pretty successful week. Charles Howell III, another top pick, closed with a disappointing 73 and fell 21 spots to finish T39. John Rollins finished in 7th place alone as a value pick, while Gary Woodland climbed the leaderboard 46 spots with a final round 64 to finish inside the top 20 (T18). This was one of the few weeks I didn’t play any GPPs on Draftstreet and it turns out I should have. I think it always happens that way. I got lucky on Fantasy Feud though. I didn’t have time to enter more contests because my Tuesday/Wednesday was packed. It turns out I would’ve lost to most of those guys that play heads up matches. I guess it evened out. 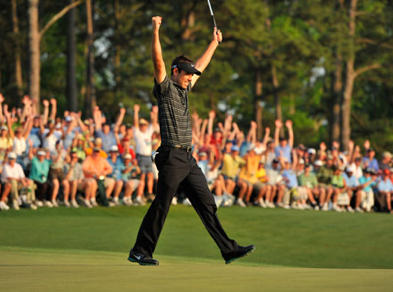 This week Merion Golf Club in Ardmore, Pa. will be hosting its 5th US Open. While the course is listed at 6,996 yards on the scorecard, it will play much longer than that. First, the golfers can’t always just bomb a driver off the tee. There will be some positioning tee shots which will make for longer approach shots. That in and of itself is interesting because it will neutralize the long hitters’ length, but also give them a better chance at finding the fairway off the tee. Second, they’ve had a downpour this last week due to the remnants of Tropical Storm Andrea. While their drainage system is being highly complimented, there is no doubt the course will play longer and slower especially earlier in the week. It will be interesting to see who that favors.

Depending on how tricky the USGA makes the rough and pin positions, birdies might be available this week. The course is pretty much divided into three sections. The first third are medium in difficulty. Then golfers will have an opportunity at scoring in the middle before hanging on for dear life on the last few holes. It should be an exciting week.

Charl Schwartzel (DS – $19,425): Schwartzel has made my blog a few times over the last month and for good reason. Aside from a missed cut at the Crowne Plaza Invitational, he has a T8 at the Memorial and a 3rd place showing at the HP Byron Nelson. He has only missed one cut in 10 events on the PGA Tour this year with eight of them being Top 25 finishes. Last year he finished T38 at the US Open but has a T9 in 2011 followed by a T16 in 2010. I think his ball striking is as good as anyone’s right now and he is my pick to win it this week.

Boo Weekley (DS – $13,670): Draftstreet has a huge, solid group of golfers around that $20k mark, whether just above or below. I don’t like taking amateurs and pros that had to go through both stages of qualifying so it is hard to fit a lineup together. However, Boo Weekley presents a lot of value in my eyes at under $14k. In 16 events this year, he has only missed two cuts and one of those was at the Sony Open which was the first tournament of the year. Weekley already has a 1st, 2nd, 6th, and 8th place showing on Tour this year. He is always talked about as one of the most consistent ball strikers. The only problem I see with him is that he has played every week since the beginning of March with the only exception being Masters’ week (he did not qualify). He has to be wearing down mentally and physically, but hopefully that doesn’t happen this week. The price is too good to pass.

Lee Westwood (FF- $130,000): Westwood will always be a sentimental pick in a major until he wins one. He’s been through so much in his career, he deserves one. This year his chances are as good as ever and priced at only 130k, I think this is a good pick. Westwood moved to Florida to fully prepare specifically for the majors. Aside from a poor showing at the Memorial, he has four Top 10s in as many events dating all the way back to the Shell Houston Open which also includes the Masters (T8). His record at the US Open speaks for itself: T10 in 2012, T3 in 2011, T16 in 2010, and so on.

Thongchai Jaidee ($10,000): I’m sure some of you saw me talking about Jaidee in Draftstreet chat Monday morning. He wasn’t going to be a play for me there, but at only 10k on FantasyFeud, he is worth a shot for a few reasons. In his last 3 starts, he has two Top 6 finishes including a runner up finish at the Volvo Match Play. In 10 starts this year on the European Tour he has no missed cuts and five top 10 finishes. Jaidee has only played in the US Open once in the last five years but finished T47 in 2010.