Last week was full of “what ifs” for my lineups across various sites, none moreso than Draftstreet. At the last moment I changed a couple golfers at the bottom of my lineup and in return had to change from Dufner (MC) to Fowler (T13). Two weeks ago I entered the $55 GPP and had every intention to this week as well but changed and went to the $55 GPP Double or Nothing instead. Of course, I would have won had I entered, but isn’t that the way it always happens? I feel like I got lucky at the beginning and then unlucky later. Anyway, Ian Poulter had a disappointing final round but still was a decent finish (T43) given his price on DraftDay. Hunter Mahan also had a disappointing weekend after opening with a 62 on Thursday to come in T24. Stuart Appleby was the highlight of the week with a T9 finish as a very cheap pick. All in all it was a good week at each of the three sites.

The PGA Tour will head south this week for the AT&T National in Bethesda, Maryland. The tournament will be hosted at Congressional Country Club which will be playing 7,569 yards to a par 71. Last year Tiger Woods edged Bo Van Pelt with an 8 under par 276 total, good enough for a two stroke victory. The third round however, got most of the attention as strong storms forced Tour Officials to close the playing grounds off to spectators. This week Tiger will not be defending due to an injury, Justin Rose has withdrawn to get some R&R after his US Open win, and hopefully the storms will not be back either. The forecast calls for highs in the mid 80s with a 40-50% chance of afternoon thunderstorms each of the days. 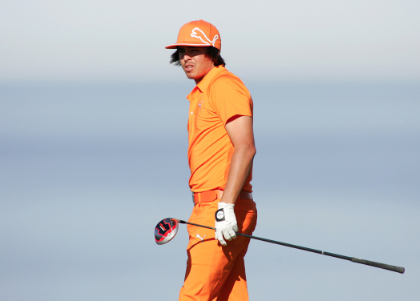 Rickie Fowler (DS – $21,790): There are a lot of good choices just above and below Fowler’s price on Draftstreet that probably make more sense on paper. In his only other visit to Congressional, he missed the cut in the US Open. After watching his play at the Travelers (T13) and US Open (T10), I feel like he is close to another breakout performance though. His ball striking has been on point while his putting has been even better. If he can stay away from a couple errant shots, and therefore high numbers, I look for him to contend.

Chris Stroud (DS – $14,551): Last week at the Travelers Championship was a learning experience for Stroud. There’s no doubt everyone would be pumped up after chipping in on the 72nd hole to force a playoff. But, golf is about staying calm and focused yet he was always raising his hands to get the crowd involved. It didn’t affect his physical game because he kept bombing drivers down 18 fairway but you have to wonder why he continued to hit that club if he couldn’t stop the ball close to the hole on the approach shot given the yardage and firm greens. Stroud finished the week first in scrambling and that isn’t something you can always carry over to the next week. He got the most out of the tournament. However, he is listed in my blog due to his price. He is coming in making 6 of his last 7 cuts with 3 top 7 finishes. At the very least, Stroud is worth a shot in a GPP lineup at $14,551.

Jason Day (FF- $186,000): Jason Day is slowly becoming an elite player on Tour. He has no missed cuts in 13 events this year. That span also includes 5 top 10 finishes (3rd at Masters, 2nd at US Open) and no finish outside of T57. Last year at the AT&T, Day finished with a -3, 281 total good enough to share 8th place. In the 2011 US Open at Congressional, he finished in 2nd place behind Rory McIlroy. Not only is Day in good form this year but he has great history at this course as well, which is why he is my top pick on Fantasy Feud.

Chez Reavie (FF -$10,000): For some reason Draftday changed their lineup after it was posted this morning. I had Chez Reavie at Fantasy Feud as my honorable mention, but after the salary update on Draftday, he now moves into the value pick. He’s made 4 cuts in a row with his worst finish being a T43 at the Travelers. Reavie has a T15 here last year at the AT&T National along with a T45 at the US Open in 2011. With his game coming around and being the lowest price possible on Fantasy Feud, I think he is worth a shot this week.