Things did not go as planned for me at the US Open. My value picks turned out horribly for the first time in a few weeks with Boo Weekley and Thongchai Jaidee both missing the cut well below the number. Charl Schwartzel entered Sunday with a chance to win but could only muster a final round 78 to finish alone in 14th place. Meanwhile, Lee Westwood had a solid weekend with a 142, +2 finish. However, a 2nd round 77 derailed his hopes of winning and managed to finish T15. Across the various sites, I did poorly at Fantasy Feud, decent at Draftstreet but lost my biggest match, and fairly well at Draftday. Hopefully things can pick back up this week. 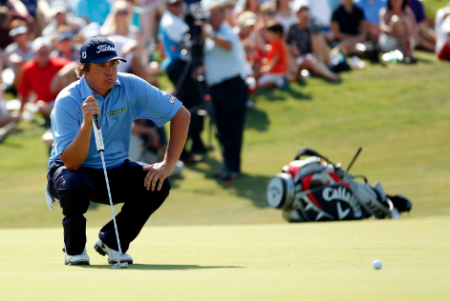 The regular PGA Tour is back in session this week after the USGA hosted the US Open. Players will make their way to Cromwell, CT to take on the TPC River Highlands Course which plays 6,841 yards to a par 70. Unlike last week, birdies should be abundant at the Travelers. Marc Leishman closed with a 62 last year for a one shot victory over Charlie Hoffman and Bubba Watson. Surprisingly that wasn’t the low round of the day as Hunter Mahan finished Sunday off with a -9, 61 to end T11.

This week is more difficult to handicap due to being after the US Open. Some golfers didn’t play. Some might’ve barely missed the cut with a few errant tee shots and some might’ve missed the cut by a lot with a couple double or triple bogeys, where they otherwise played very solid. A drive that leads to a double or triple bogey at the US Open could lead to a birdie or par at a normal event because the rough isn’t as high, greens aren’t as fast or hard, and it is a whole different game mentally. The weather should not be much of a factor this week with highs in the high 70s/low 80s all week, hardly any wind, and partly cloudy for the majority of the tournament week.

Jason Dufner (DS – $25,931): I’m taking a shot with Dufner as my top pick on Draftstreet. A triple bogey on 15 ruined Dufner’s chances of winning the US Open but still managed to finish T4 with a final round 67. He has only missed two cuts in 13 stroke play events but the reason why I say “taking a shot” is because the US Open was his first top 10 of the year…not exactly a stellar record for someone you are spending the most money on. Also, he hasn’t played here since 2008 when he missed the cut. It is a bit of a reach to take him, but I don’t think many will and his ball striking was on form over the weekend. A solid week and you could move up the Draftstreet leaderboard with this pick.

Ian Poulter (DD – $15,300): I decided to throw in the newest site that has fantasy golf, which is Draftday. Ian Poulter started the year hot, cooled down, but seems to be picking things back up. He finished T21 at the US Open but closed with a disappointing 76 on Sunday. The main reason to pick him at Draftday is the price. This is considerably lower than his proper value and I expect most to take him this week.

Hunter Mahan (FF- $151,000): Mahan has to be one of the favorites this week considering his finish last week and his past results here at the Travelers. He did finish +4 over the last four holes to finish T4 but he was solid all week at Merion. He’s only missed two cuts in 15 tournaments this year with nine top 25 finishes. That doesn’t even include his runner up finish at the WGC Match Play. Mahan finished T11 here last year, T43 in 2011, T4 in 2009, and T2 in 2008. He is a “horse for the course” and coming in with good results. At $49,000 less than Justin Rose, I think Mahan is a solid play this week.