It was a very indifferent week for me last week. Had the -2s gotten in, it could’ve been better on Draftstreet but maybe worse on Fantasy Feud. Josh Teater missed the cut on the number and Jimmy Walker (T8) fell apart after number 8. It really didn’t matter that much though as Walker was about 76% picked in my double up league. I did have Horschel (1st) as well, but he was over 40% picked. Justin Rose had a solid finish for a Fantasy Feud pick while Camilo Villegas missed the cut. Camilo missing the cut wasn’t that big of a deal though as everyone seemed to have him picked. It was a successful week at Fantasy Feud and I’ll probably spend most of my time (and money) there this week as I continue to try to get out of the funk at Draftstreet. 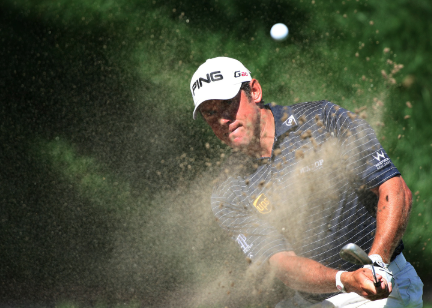 The PGA Tour continues its southeast swing with a trip to Charlotte, North Carolina for the Wells Fargo Championship. The tournament will be played at Quail Hollow (7,492 yards, par 72). There are some pretty strong players here even with the Players Championship next week. That number will probably only grow in the coming years seeing that Quail Hollow will hold a major championship in the near future.

Rickie Fowler is the defending champion after winning a one-hole playoff against Rory McIlroy and D.A. Points last year. Their 274, -14 total was good enough to finish one shot ahead of Webb Simpson and three shots ahead of Lee Westwood. It should be an exciting week as all of these golfers are back to contend for another victory. The weather should be fairly calm with highs in the upper 60s to lower 70s. There is only a slight chance of rain each day and the wind should not play a role either.
Let’s take a look at some golfers:

Nick Watney (DS – $20,840): Watney is quietly putting together a solid year without making much noise at the top of leaderboards. He’s had four top 20s (excluding Match Play) in 9/10 cuts made this year. At the Masters Watney was +6 after an opening round 78 but fought back to play the last three rounds in 7 under par to finish T13. He followed that up last week with a T15 at Zurich with no round outside of the 60s. Watney has a very good record here at the Wells Fargo which includes an 8th place last year and T22 in 2010 and 2009.

Chris Kirk (DS – $14,090): Chris Kirk looks pretty good for the price he’s at this week. This hasn’t exactly been his favorite course (T57 last year, missed cut in 2011) but he’s made 9/10 cuts this year including eight in a row. Aside from the one missed cut back in January, his worst finish is T51 at the Honda Classic with a handful of finishes inside the Top 25. Kirk is 9th in strokes gained putting and 7th in scoring average. I think Kirk has a lot of upside and also opens your salary space with this price just over $14k.

Lee Westwood (FF- $186,000): With the flexibility Fantasy Feud has, you can take a few high priced golfers. This week one of them for me will be Lee Westwood. He hasn’t played since the Masters but finished T8 there and T10 at the Houston Open before that. In seven stroke play events this year he hasn’t missed a cut while finishing in the top 25 in five. Last year at the Wells Fargo he managed a T5 after recording a 68-66 over the weekend. Westwood is 13th in total driving and 16th in scoring average.