It was a decent week for the blog picks last week as all four golfers made the cut. The problem was with Kuchar and Dufner only mustering T35s. Instead, it was the Euros week with Graeme McDowell and Luke Donald finishing 1st and T3, respectively. The value picks came in pretty well as both Tim Clark and Stewart Cink finished T24, although Clark could have been much higher as he entered Sunday T6. On a personal note, I had a golfer withdraw after the first round and it’s always frustrating to see that happen especially because the cut came at +2. Oh well, onto this week. 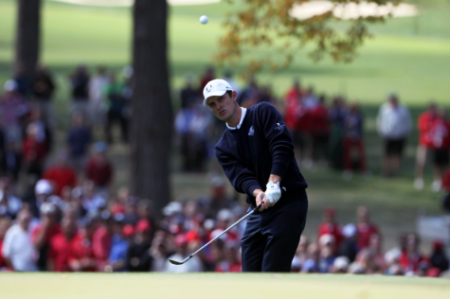 The PGA Tour now heads west to Louisiana for the Zurich Classic to be played at TPC Louisiana. The course will be playing at 7,425 yards to a par 72. Last year it was Jason Dufner prevailing in a playoff over Ernie Els to earn his first PGA Tour victory. After Ernie missed the Masters last year, both guys were crowd favorites at Zurich and it’s a shame one had to miss out on the victory and automatic trip back to Augusta National. Obviously Els ended up taking the British Open later in the year, so it worked out fine for both golfers.

As for the weather this week, the Pro-Am might get rained out Wednesday but that’s about it. There is a 50% chance of showers Thursday so it doesn’t look like any major delays unless the course is still soaked from the day before. The wind could get up to 11mph, but should not be much of a factor.

Jimmy Walker (DS – $15,982): I’m skipping the high priced guys on Draftstreet this week and getting right into value picks. Horschel and de Jonge have finally gotten the respect they deserve in pricing so it’s down to Jimmy Walker now. He’s 10 for 10 this year in made cuts with no finish worse than T53. In that span he has three top 10s and three other finishes inside the top 26. Walker finished T18 here last year with a pair of 68s over the weekend. He is 14th in driving distance, 9th in birdie average, and 11th in scoring average. At this price, I think you have to take him until he falls or Draftstreet raises the price.

Josh Teater (DS – $10,753): Teater started the year both hot and cold. He followed high finishes with missed cuts in his first four events but has since settled down and is on a streak of seven consecutive made cuts. During that span he only has one finish inside the top 37 (T6 at the Northern Trust Open), but that is what you expect from a price tag under $11k. He missed the cut here last year but finished T16 in both 2011 and 2012. Hopefully a made cut here with four solid rounds can add crucial weekend points while freeing up salary for the higher priced golfers.

Justin Rose (FF- $200,000): Rose is the highest priced golfer at both sites and for good reason. He is ranked #4 in the World and the oddsmakers favorite this week. He’s had a limited schedule on the PGA Tour, only playing in five events so far this year; however, he has three top 10s and no finish outside of 25th. The 25th place finish came two weeks ago at the Masters after a disappointing 74-75 over the weekend. Rose is 12th in driving distance, 2nd in scoring average, and 1st in sand save percentage. The price ranges are so wide on Fantasy Feud, you are able to take a few of the big favorites and I think Rose should fit in nicely this week.

Camilo Villegas (FF- $46,000): Just above the 10k price tag is Villegas coming in at $46,000. He’s only made four of eight cuts this year, but his game has really picked up lately. In his last four events he’s finished in the top 20 three times including a T9 last week at the Heritage. Even in his missed cuts, Villegas has had some solid rounds. I’m not predicting him to win or anything, but he could be a good pickup to fill the bottom portion of your roster.
Good Luck this week and don’t forget to check for withdrawals. I will leave a note in the comments if any of the golfers I write about withdraw until Wednesday night at 8pm leading up to the tournament