It’s all over and ektdar (a top 100 TPOY ranked player) has held on to win the seven-figure first place prize as well as having the fourth and fifth place lineups. RotoGrinders frequent forum poster mizzou311 would start the day in first place with high hopes but some shaky performances from a couple of his golfers would see him drop down to eighth place overall. Still a very respectable showing. Here is the final top 10 and the winning lineup.

Last swag giveaway for the day – first comment to say how much ektdar’s winning three lineups won overall will win a RG shirt. Thanks for following along today! 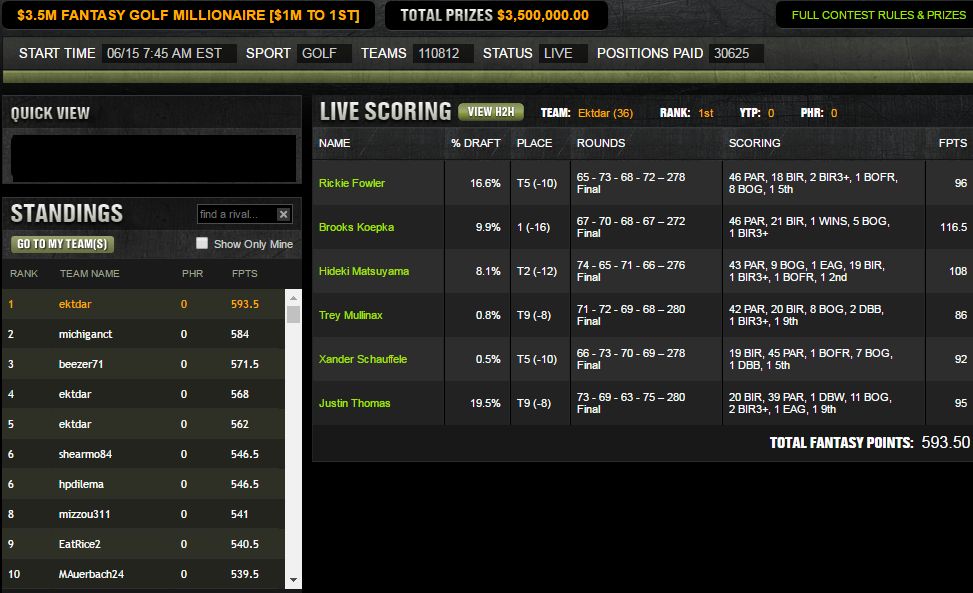 A birdie by Xander Schauffle on 18 has given what appears to be an insurmountable lead to ektdar as he holds a 16 point lead (and the third and fourth place lineups) with just a few holes remaining. Here’s a look at his leading lineup and the current standings. 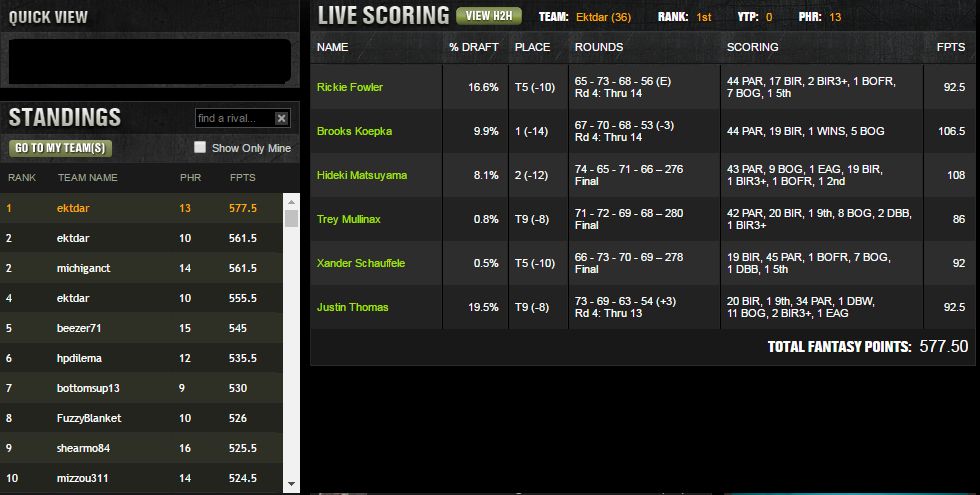 A bogie by Brian Harman has given Brooks Koepka sole possession of first place and the loss in bonus points has dropped michiganct’s Harman lineup down some and given ektdar a cushion of 15 points. As if that wasn’t enough, he also has the third and fourth place lineups. If the tournament were to end now he would collect $1,115,000.

A birdie by Hideki Matsuyama has moved ektdar into the top spot by just .5 points over michiganct. Matsuyama is -5 on the day and has been a huge reason for the great day by ektdar as all three of his top five lineups has the golfer in them. Unsung heroes like Trey Mullinax (-3 on the day, -7 for the tournament), and Xander Schauffele (-2 on the day, -9 for the tournament) though are the real keys to his top lineup. Those two players both came in at under 1% ownership.

First person to name in the comments two other Hideki’s that have played professional sports will win a RG t-shirt. Must be first-time winner on the day.

It’s now officially a three-person race with the top three all within 10 points of one another. michiganct continues to hold the top spot over ektdar by 7 points but lurking not too far behind (8.5 points) is beezer71. ektdar also has the next two spots in the top five and is looking at a very healthy addition to his bankroll. We’ll do another giveaway the next update so make sure to check back soon!

The leaders are about to start the back nine and it looks like it’s a two-horse race for the million as michiganct holds a one point lead over ektdar. It’s golf though and all it takes is one eagle or double bogey to shift fortunes. Mizzou311 is still hanging around but he’s going to need a miracle to have a shot. 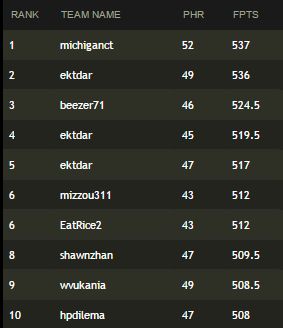 beezer71 is making a run at it as he has moved into second place with his lineup containing Koepka, Harman, Fowler, and Hoffman – all four of whom are in contention at this time. michiganct continues to lead the way with ektdar in 3rd, hpdilema in 4th, and mizzou311 still hanging in there in 5th place.

First person to comment in this thread with ektdar’s current TPOY rank will win a RG t-shirt.

ektdar is dominating the top ten of the Milly Maker currently with three of the top six lineups but it’s still michiganct who is in the lead and after a Brian Harman birdie (happened right after the following screenshot was taken) he’s built a nice cushion of over 20 points. People behind him are going to have to hope Harman falls apart or else michiganct could run away with this with Harman coming in at just 1.7% ownership. 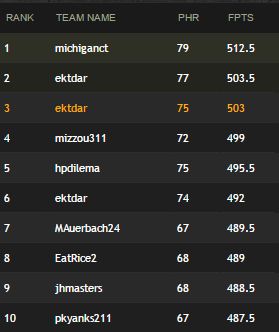 A terrible start from Marc Leishman had dropped our boy Mizzou311 all the way down to 8th place but a birdie by Leishman on 8 and Brooks Koepka starting things off with a birdie have catapulted him back up to 2nd place with michiganct now our new leader – he’s riding a strong start from Hideki Matsuyama (-3 so far) and also has the overnight leader Brian Harman in his lineup.

Time for another giveaway – we’re going to do something different this time around. Yours truly has a Millionaire Maker lineup that will probably min cash with just 4 of 6 golfers. The first person to post in the comments to this article which two golfers on my team did not make the cut will win… drum roll a rare RG hoodie! Anyone is eligible for this prize including those who have already won something today. 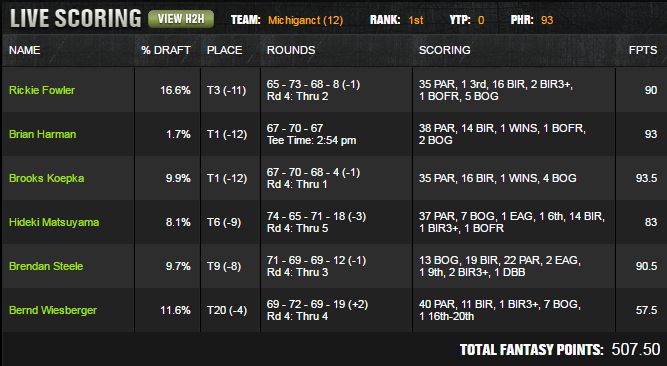 We have a new leader as ektdar on the strength of four golfers (Holmes, Matsuyama, Schauffele, and Steele) all posting -1’s thus far. mizzou311 has dropped to third behind michiganct as Leishman has posted a +2 and Casey a +1 thus far to not help his cause. 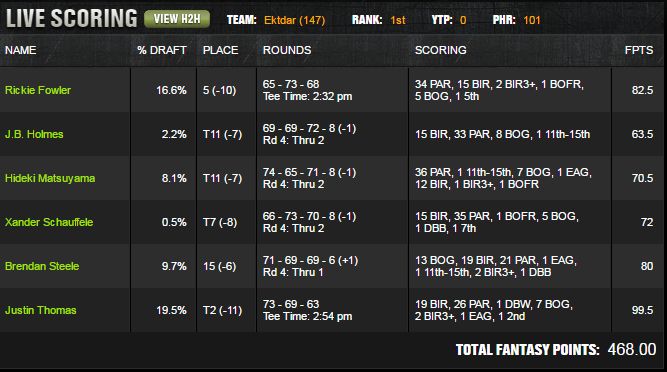 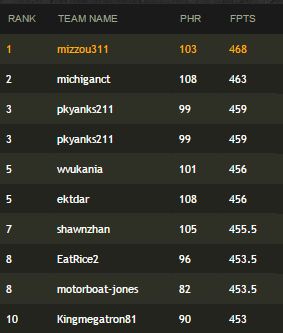 mizzou continues to hold the top spot by 5 points as his second golfer, Marc Leishman has started his round. There’s been a little movement in the top ten as EatRice2 has moved into 8th place with Kuchar and Steve Stricker in his lineup, and motorboat-jones with his strong final round performance from Jordan Spieth has entered the top 10.

First person to post the name of the player currently in 6th place (in the above image) in the Milly Maker in the comments will win an RG t-shirt.

mizzou311’s first golfer has teed off and got a par on the first hole to help him maintain his slim lead over michiganct. pkyanks211 has his two lineups in third place currently while ektdar rounds out the top five.

First person to post in the comments the golfer for mizzou311’s team that just got a par on the first hole will win a RG t-shirt.

pkyanks211 has a two-team train currently sitting in 4th place after Kevin Chappell birdied the par-5 first hole. He could be in line for a huge payday if Chappell continues his good start.

No contest this update. Stay tuned for the next one!

A Matt Kuchar birdie has moved wvukania into 7th place and a solid performance from Kuchar could lead to a huge payday as no one in front of him has “Kuch”. fh2017 remains in 11th place while jhmasters moved up one spot to 12th. The current leaders should see some of their golfers teeing off soon so we’ll start to see some massive movement soon.

First person to respond “Stick it in Kuch!” in the comments section wins a RG hat.

We’re starting to see more golfers go off the tee. fh2017 is in 11th place and just had Rafael Cabrera-Bello tee off. jhmasters and his Shane Lowry lineup is up to 13th place. While laaubar and his Kevin Na lineup sit in 25th.

First person to reply “Na Good” after I make this post in the comments section will win an RG t-shirt.

The first group of golfers have teed off and as you might expect, there isn’t much movement at the top of the standings as most players have golfers that are teeing off later. jhmasters does have Shane Lowry currently on the course and a good run by him good move him up the standings as he’s currently in 18th place. The same could be said for motorboat-jones who has Jordan Spieth currently on the course (off to a good start at -2 for the day) and is in 25th place.

To see who is reading this we’re going to offer a RG t-shirt to the first user who comments on the article below with the words “first”. Deck of cards to the second user who does the same.

We’re going to be here all day sweating the Millionaire Maker on DraftKings as RotoGrinders.com member, mizzou311, looks to hold off the pack and take down the seven-figure first place prize.

We’ll post updates throughout the day so make sure to check in and see who makes a surge up the leaderboard and if one of our own can take down the big money! Here’s a look at the current standings heading into today and mizzou311’s leading lineup. 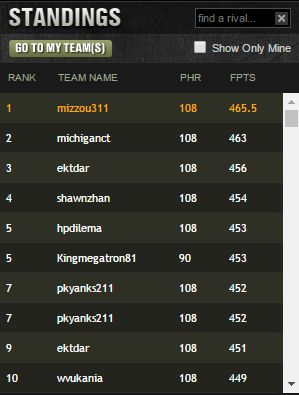 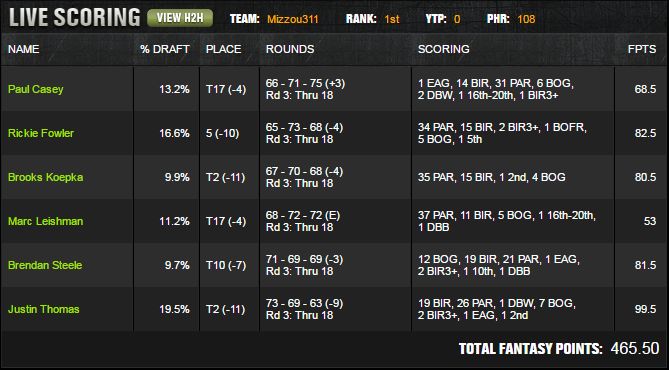