FanDuel is running a contest between nine of the top fantasy content sites to see who is able to put together the best lineups over the course of five weeks. For more details, visit the FanDuel Partners Basketball Championship homepage. Team RG took a small lead in the contest with two nights to play. Since we weren’t playing from behind, my strategy remained the same. I used my cash game lineup for the FPBC. 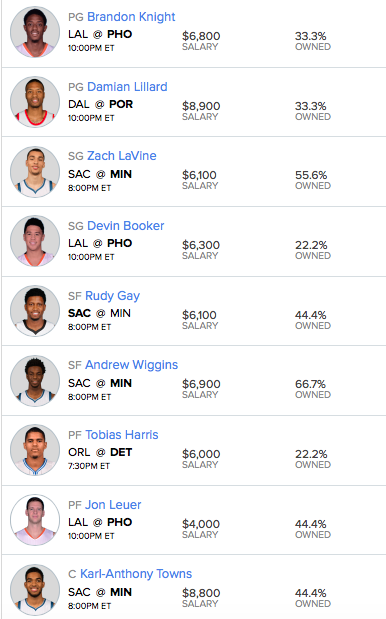 And here is a breakdown of my favorite five plays on FanDuel:

Brandon Knight: $6,800 – Since returning from injury, Knight has been ice cold from the field. In fact, he is shooting a measly 33% from the floor. The good news is that he has still been able to put up a few fantasy outings in the mid to high-30s. That was promising to me, because once his shot starts to fall, his fantasy outings are only going to get better and better. I was willing to take my chances on that happening tonight against a Lakers’ defense that is one of the worst in the NBA.

Zach LaVine: $6,100 – Basically all five starters were in play from Minnesota tonight. The Kings play at the fastest pace of any team and are ranked dead last in points allowed per game. LaVine was an easy choice at shooting guard, as he has been logging minutes in the upper 30s seemingly every night. He provides both a high floor and a high ceiling at a price of only $6,100.

Rudy Gay: $6,100 – Gay let a lot of DFS’ers down a couple of weeks ago when DeMarcus Cousins was ruled out. He had a poor shooting performance and fell way short of salary expectations. I was willing to overlook that tonight, as his usage rate goes up dramatically when Cousins is not on the floor. It also helps that he is facing the Wolves in what should be a high scoring game.

Jon Leuer: $4,000 – As of the time that lineups locked, Leuer was not announced as the Suns’ starter. However, Tyson Chandler was expected to sit and Leuer did start the second half for him the other night against Memphis. I figured the risk was worth taking at a price of only $4,000. Even if he ends up coming off the bench, he still has a good chance of exceeding value against the Lakers.

Karl-Anthony Towns: $8,800 – Towns became my favorite center on the board as soon as DeMarcus Cousins was ruled out. The Kings don’t really have another good low post defender and I fully expect him to dominate the glass on both ends of the floor. I also like the fact that his minutes have been trending upward, averaging close to 37 in his last ten games.